At 7 a.m. I leave home in my trusty 2003 Toyota Corolla, enroute to a family reunion in the Dubuque Iowa area. I’ve decided to do the trip on the slower but much more scenic and interesting Mississippi River Road. Weather is supposed to be good, and this is always a beautiful trip. I’ll be traveling alone, which gives lots of thought time. I never travel with computer, so there will be a hiatus at this space. I return Sunday night.
I’ve done this route before, several times in fact. The Mississippi was rolling long before there were humans around this place, and its done its work carving and molding the beautiful countryside for eons before there were towns and roads and such.
Human encroachment, in the way the history of our planet is mentioned, hardly merits a nanosecond, if that. But in that nanosecond we’ve unalterably changed the landscape and the resources which feed our voracious appetite for things like the gasoline that will make it possible for me to make this trip in relative comfort.
My people have been in the Mississippi Valley since, most likely, the 1700s (the French-Canadian side); and the 1840s (the southwest Wisconsin German side). Some of them were already there, farming, when the Grand Excursion of 1854 gave well to do tourists their first view of the upper Mississippi Valley, ending at later to be St. Paul and Minneapolis and the settlement floodgates began to open. It was not until the late 1860s that railroad would actually reach the new twin cities of, then, St. Paul and St. Anthony/Minneapolis.
As I drive, I’ll likely be shielded from the current hubbub and insanity in Washington and St. Paul. I have a few favorite CDs along to keep me company, from Mozart to folks songs. Life is too short to seek out the local radio stations which too often feature national talk radio.
In Viroqua, if I’m lucky, I’ll have coffee with a good friend who went to prison during the white hot times of Vietnam War protesting in 1970, but that may be the only contact with politics as such. Family reunions are no place to get into arguments about national policy. In fact, I won’t invite these encroachments. Just me. Life is a bit too short. There are other times to do that.
Most likely, typical for me, I’ll catch up on the news through the local newspapers in places like LaCrosse, Prairie du Chien, Dubuque…. It is always interesting to get the local perspective, at least such as it is printed in the local journals. Also, typically, I won’t watch much television. I don’t do that at home, either, but even less on the road.
(Click on photos to enlarge them. The entire set, from early 1900s postcards, can be seen here.) 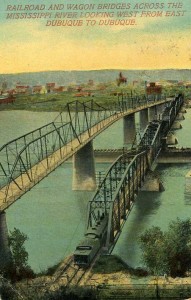 The bridge at Dubuque in the early 1900s - a postcard rendition 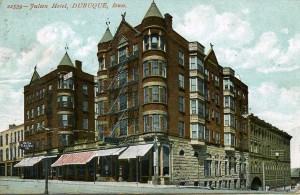 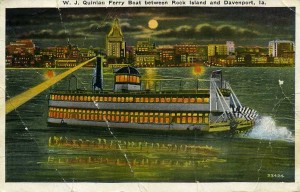 1933 on the Mississippi at Davenport IA - a postcard

I’ll deliver a couple volumes of my family history to the Dubuque Public Library later today. The most recent one I just had printed a few days ago: 475 pages largely of letters and postcards written from Wisconsin farm to North Dakota farm between 1905-13 or so. A story and pictures introducing the postcard section of the book is here. The longer, and in my view more fascinating, section of the book is over 100 handwritten letters found in a container at the old deserted farm house in 2000, Mostly they were sister-to-sister, talking about ordinary rural life near Dubuque from April, 1905, to June, 1906. They are literate and they are fascinating, from a time when people actually put pencil to paper. 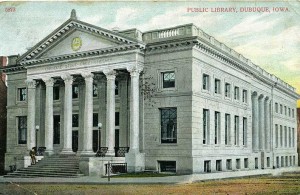 Dubuque Carnegie Library in 1910 - from a postcard

In the course of these letters came the first telephone to the rural folk of Grant County Wisconsin. A description of an encounter of a horse carriage with an unexpected automobile is hilarious. The letters were oft-written by candlelight in the farmhouses of that day and occasionally brought news of tragedies too, such as the distraught young housewife in rural Kieler WI who in 1905 killed her four young children, ages 1 to 4, with a butcher knife, and then used the same instrument to kill herself. I’ll see if I can find their common grave – the name is Klaas – which is supposed to be in the churchyard at Kieler, near where a relative of mine lives. Oh, the stories.
Back at this space on Monday.
Have a great weekend.
NOTE: This is part of a continuing series of commentaries on the political problems we’re now facing in this state and nation. The first was published on June 23. Each hi-lited date on the calendar at upper right has a column behind it. By placing the cursor on the date, you can read the title of the particular column.
https://thoughtstowardsabetterworld.org/wp-content/uploads/2022/04/thoughts-300x138-1.jpg 0 0 dickbernard https://thoughtstowardsabetterworld.org/wp-content/uploads/2022/04/thoughts-300x138-1.jpg dickbernard2011-07-08 04:44:472011-07-08 04:44:47#398 – Dick Bernard: Day 8 of the Minnesota Shutdown; 25 days to D-Day in Washington D.C. Going to a Family Reunion
0 replies