This mornings New York Times (NYT) had an interesting article about a St. Paul area business man reluctant to hire workers.
A couple of days earlier the Minneapolis Star Tribune had an equally interesting column by a long time very prominent business executive essentially rebutting the oft-repeated and false argument of conservatives that taxes will cause a drain of business to lower tax places.
The two news pieces are among many similar commentaries these days, but people tend not to read information, particularly that which does not support their own view of reality. So we have the continuation of our economic storm.
Capitalism is, it seems, tying itself in knots.
“The Quandary”? See the end of this commentary.
For some reason, the Times column caused me to revisit a little adventure from several years ago, and this afternoon I jumped in my car to view in the present day what I had first viewed eight years earlier, June 19, 2003, in Fridley MN*.
On the way home I traveled by the company featured in the NYT column. It is a small place across the street from the tony suburb of North Oaks (below, click on photo to enlarge). I’m always curious how such places and people get chosen for news analyses, out of hundreds of thousands of possibilities. 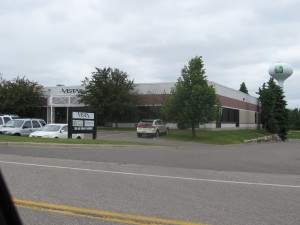 I had been at the Fridley company the pleasant June day in 2003 when George Bush visited. The place looks, today, much as I remember it eight years ago: 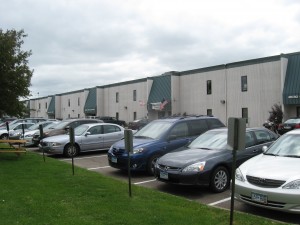 That visit by the President of the United States was one of the most tightly controlled events one could possibly imagine. I could understand avoiding protestors with anti-war signs; but even Bush’s supporters were denied even a glimpse of the motorcade, and they were not pleased. Here is what the President said that day in June, 2003, less than two months after we had “won” the war in Iraq (oh, we were naive then…and still). The Presidents message emphasizes tax cuts, along with some bragging about the War on Terror, and assorted other promises. It is worth reading the history in President Bush’s own words eight years ago this month.
The Quandary: The Alliance of Business and Conservative Ideology has won the battle, but simultaneously lost the war…for all of us.

I have no doubt that corporations and government are full of very smart people, and that leaders of organizations of all types are also very smart. But there is all manner of dissonance between what is stated as truth and what is real. Compare George Bush’s dream in 2003 against the reality only five years later, in mid-2008.
Capitalism is a philosophy that thrives on consumption of goods, which generates revenue through spending of money, which generates profits, and something called the multiplier of money (a dollar spent is actually more than a dollar, because it is spent over and over.) But in many ways the contemporary economy has become nothing more than a gigantic Ponzi scheme. People need money to buy goods; if fewer people have money to spend, less goods can be bought. If the money spent is borrowed (credit card) etc., it is actually not money in hand. It is only a debt to later be repaid.
The rich, who were the greatest beneficiaries of the Bush tax cuts, generally put most of their money out of circulation (personal savings). It is money for which they have no immediate use. The poor, on the other hand, need to spend all of their money, and even if they spend it foolishly, it goes into circulation. It can be argued that the poor stimulate the economy more than the rich, simply because they spend their money to survive.
During the years of false prosperity in the Bush years, particularly 2001-2008, the Iraq War was financed off the federal budget books – on borrowed money. The borrowed money brought false prosperity, but also a debt that has come due.
At the same time the economy needs to be stimulated, largely by government infusion of capital, while the conservative drum beat is to strangle government, which costs people jobs, and again cripples the economy. Corporations are sitting on mountains of cash, but decline to hire people for one reason or another. In the long run they are hurting themselves and the country.
The only solution is an informed and active citizenry – you and I. Are we up to the task? We ARE, after all, the government.

UPDATE: Overnight came a most interesting commentary that supplements the above. It is worth a read as well.
* – What I wrote June 19, 2003, about President Bushs visit:
Well, I went. Along with quite a few Republicans, I didn’t even see GWB’s limousine, much less the little guy himself.
We were at a sort of non-descript warehouse type of building in the Minneapolis suburb of Fridley, the headquarters of the company at which he was appearing. We thought we were at the right door. About 1:15 pm CDT, I heard what sounded like a muffled cheer coming from within the building, and I think it was then he made his grand entrance through the back door. I guess we should have had a clue when a U-Haul pulled up to the same front door a few minutes earlier to load up stuff. Hope springs eternal. I wasn’t the only one fooled.
The small consolation is that he “stiffed” everybody – including true believers with tickets who couldn’t get in, and were waiting to see their patron saint, and perhaps even press the sacred flesh. They were not inclined to complain…at least not within the group along the roadside with us.
If you had any interest, you saw the lucky true believers on TV, from inside the warehouse. The disciples looked to be basically very well dressed. Apparently a few dissidents got in, but I don’t know for sure.
It was a beautiful day, and I was surprised that there weren’t more people. There was a good enough crowd, but even on a work day I have seen much higher attendance at political events. Somebody said there were a couple of thousand in the building, which seems a bit on the high side. Anyone who was seated in the building had to go through what seemed to be pretty tight security. The rest of us – perhaps a thousand or so – cooled our heels outside.
There were a few peace activists there (good for them), and beside them were a few true red-blooded Americans, most with their “Liberate Iraq” signs. Either the red-blooded American liberators didn’t hear the president’s speech from the USS Abraham Lincoln, when he said that Iraq was liberated; or he’s told them something that he hasn’t told me; or they thought the signs were too good to waste, after all the official war was very short. An hour or two before the Chief was scheduled to arrive, at the front of the liberator contingent was a little girl, perhaps five, waving a flag bigger than she was, and reciting the mantra over and over “God bless America”. A true patriot, doubtless.
At one point, a phalanx of peace activists quietly approached the front lines – where the Republicans who couldn’t get in, and I, were standing. It was a quietly uncomfortable time. One of the well-dressed types asked another “what do the masks signify” (some of the protestors were wearing masks, I guess). There was no answer, except somebody said they were “rabble rousers”. All this happened very gently. “Minnesota Nice” was dripping.
One young lady with a sign talking about 79,000 lost jobs per month during Bush times, was an object of some derision by two well-dressed people, a man and woman. The man wondered if the demonstrator was an exempt or non-exempt employee. No one directly took her on, however.
Some adult lady in my section sang the first stanza of God Bless America, but no one joined in. She went a little ways down the line, and tried again. Still no takers. Somebody said “Star Spangled Banner”, but no one went there, either, including the singer.
Two protestors came through behind us, one chanting “Who is a terrorist?”, to which the other responded “Bush is a terrorist.” A tall well dressed young guy standing near me, who I had thought must be a secret service agent, dark glasses and all, sort of under his breath muttered “Liberals with radical ideas are terrorists”. I guess I am a terrorist…. He apparently was not a secret service agent. Shortly after that, he disappeared.
Actually, I felt a bit sorry for the Republicans who apparently had tickets for the event but couldn’t get in. I don’t know what the snafu was. I had zero interest in going in, so it didn’t bother me.
Right before leaving I visited briefly with three women who were protesting. We had a nice visit. Peace people are peaceful people!
I left with a guy who does independent media stuff, and he suggested a visit to www.twincities.indymedia.org [his work is most likely no longer on-line, though the web address still is active]. Go to “The rest”, click on “Search”, then select photos and Bert Schlauch, and you’ll see some excellent stuff he has posted (and doubtless will post about today). The site is a very good one. So there you have it.
We have a virtual president. The closest I came to actually seeing him today was five mobile transmission towers for the television stations.
Keep the faith. Keep on, keeping on!
Peace.
https://thoughtstowardsabetterworld.org/wp-content/uploads/2022/04/thoughts-300x138-1.jpg 0 0 dickbernard https://thoughtstowardsabetterworld.org/wp-content/uploads/2022/04/thoughts-300x138-1.jpg dickbernard2011-06-10 20:32:342011-06-10 20:32:34#383 – Dick Bernard: The Quandary for Big (and Small) Business, and its impact on all of us.
0 replies