A brief trip to Chicago in early March was to attend the burial of my Uncle Art.
As it happened, my hotel was in the “village” of Westchester (pop. app 17,000), a middle class suburb where my Uncle and family had lived for over 20 years till his first wife died and he remarried and moved about 1980. I had visited Westchester with some frequency back then, so I knew the town pretty well, and it was an opportunity to re-see it.
For many years I have made a practice of seeking out the local “flavor” when I travel. So, on Saturday, March 5, the hotel offered breakfast with the room charge, but I got in the car and wandered back into Art’s old neighborhood to find something in the neighborhood, and finally noticed a promising sign: 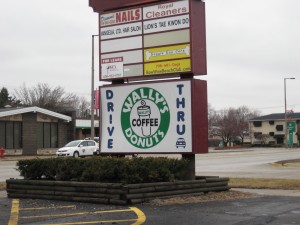 Wally’s was in one of those ubiquitous small shopping strips that dot American communities. It was your standard “coffee and donut” place. I was the only customer at the time I entered.
Westchester is a middle class professional community, and Wally’s was not fancy as I would have expected, actually quite spare in its decor.
Something immediately caught my eye. Posted very visibly, twice, was an article from the April 9, 2010, Chicago Tribune. I read the article. The proprietor Walid Elkhatib, had been a franchise holder for one of those immense donut and coffee chains, and in 2010 had lost his franchise after a long legal battle over his refusal to market a certain kind of sandwich which went against his Muslim beliefs. The article was fascinating, and I wanted to talk to “Wally” but he wasn’t there at the time.
A little later he came in, a very engaging sort of guy. Customers came and went. Wally had a particular affinity for youngsters, and had a bowl of donut holes he called “munchkins” for the young children.
I lingered a bit longer and had an opportunity to talk briefly with him. He’d been in business since 1977, he said. With full knowledge of the franchise company, he didn’t market the sandwich because of his beliefs, and there were no questions.
But ultimately after September 11, 2001, the corporation turned up the heat, and the end result was his losing his franchise – huge loss. All that remained was his storefront, on which he held the lease, and a local trade which he had known for many years.
When I walked in the place, I had no idea of the earlier corporate link. After I knew, it all fit together (his apple fritters are delicious, just like in the old corporate stores you’ll find in every state.)
He and I had never met before, and didn’t have much of an opportunity to chat, but there was lots of content in those few minutes we visited.
It is clear to me, particularly from an earlier Chicago Tribune article, that the sandwich really wasn’t the issue; it was Wally’s religion and the post-9-11 hysteria that led to his downfall.
The community? It is predominantly white, Christian, middle class, professional.
He said that the local community gave and gives him very strong support. The legal issue was between the Corporation and himself. He lost.
He’d planned to retire, but the legal case did lots of damage to his savings, and he needs to keep the business.
I hope to be able to stay in touch with him.
I wish I had a photo of Wally behind the counter, but I didn’t have the presence of mind to take a photo at the time. I came back later, and he’d left for a couple of hours, and I couldn’t return….
(I couldn’t come up with an internet copy of the Chicago Tribune article posted in his shop, or the specific court case. I will keep looking.)
NOTE: This history of this post goes back to a simple act of kindness shown by a Muslim family in western North Dakota in 1953-54, as described in my September 5, 2010, blog entry.