As I write, in the background is Wolf Blitzer and Company at CNN already endlessly analyzing the actions in Libya today. A retired General is talking. Of course, everyone is a war expert. War is always interesting, and a launching platform for all points of view.
Peace is boring, or so it seems. How do you report on cooperation when conflict is more exciting? This is how our society seems to assess one versus the other.
Or is Peace really boring to the vast majority of us? Is it, rather, that War is interesting to the visible minority who control the air waves? Hmmmm.
The first time I ever heard Wolf Blitzer was during Desert Storm which began in late January, 1991 with the invasion of Iraq.
I remember vividly where I was when I heard that the U.S. had invaded Iraq – I was driving on Co Rd 42 in Burnsville MN.
Back home that evening, I heard Wolf Blitzer, announcing on CNN from perhaps Saudi Arabia. While he was already a veteran reporter, this was perhaps his first highly visible assignment, talking under Palm trees in his Middle East location. Desert Storm made Wolf Blitzer and CNN into household names. They made a lot of money covering War.
But I was not opposed to the first Gulf War – it seemed necessary at the time – and indeed I got into non-ideological correspondence as pen pal with a young GI in Saudi Arabia. Not long ago I reconnected with the man, and sent him a half dozen letters he had written to me from the front. I thought we’d get together, but haven’t done so as yet. 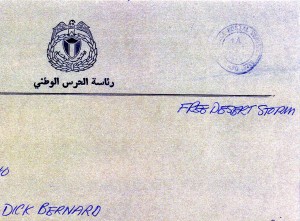 The 1991 War was rapidly over, at least the newsworthy part. The anti-war movement had scarcely time to get organized.
March 19, 2003, 8 years ago today, the bombs began to drop again on Iraq.
This time I wasn’t on the sidelines. The bombing of Afghanistan in October, 2001, had got me into the fray and I participated in lots of demonstrations over the years. I could see no good coming of what I felt was simply U.S. actions to avenge 9-11 by demolishing a poor country. I wrote a newspaper column, published April, 2002, which didn’t even mention the word “Iraq”: 2002001.
Of course, all that ended up mattering to the then-administration was Iraq. We essentially destroyed Iraq, based on a false argument; and we’re still in Afghanistan.
But the action which began today in Libya finds me somewhat conflicted. At the outset, I’m feeling a bit like I did back in 1991. There are major distinctions between the others and this, at least so I feel.
Perhaps I should have joined the annual march remembering the anniversary of the bombing of Iraq today, but I didn’t (I actually drove by the site where the march was to begin but decided to come home rather than park and join the small gathering). My heart wasn’t sufficiently in it. I suppose this makes me a sellout. Really, all it means is that I have an opinion.
I just turned off Blitzer and went back to college basketball, and I will despise every retired General who is hired to analyze the tactics and strategy in Libya in the coming days.
I am every bit as opposed to war as ever, but I think the time is long past for alternative actions: to be for things rather than against.
People I know will disagree vigorously with this. To not be against war is considered to be for war.
So be it.
Three websites dedicated to Peace:
The U.S. Peace Memorial Foundation. I am active in this initiative and a Founding Member. I encourage your support in this long term venture.
A Million Copies. This is a personal website specifically dedicated to two elders who have long years dedicated to world peace and understanding, Lynn Elling and Dr. Joseph Schwartzberg. At this site are links to several other initiatives towards a peaceful world.
World Citizen. This organization, of which I’m vice-president, works to bring peace education into classrooms and is beginning an on-line presence. It is also co-sponsor of the annual Nobel Peace Prize Festival at Augsburg College in Minneapolis (link to Festival information is at this site).
At least take a look.
https://thoughtstowardsabetterworld.org/wp-content/uploads/2022/04/thoughts-300x138-1.jpg 0 0 dickbernard https://thoughtstowardsabetterworld.org/wp-content/uploads/2022/04/thoughts-300x138-1.jpg dickbernard2011-03-19 20:32:512011-03-19 20:32:51#349 – Dick Bernard: The Third War in 20 Years? Is it time for the Anti-War Movement to Change Tactics and Strategies?