Early last evening we were having a light meal at a nearby hotel before hearing the Minnesota Orchestra in Minneapolis. (Magnificent concert, as always.)
Our server, Mindy E., took my credit card to ring up the bill, and on return asked me “are you a teacher?” She had seen the imprint on the credit card; the teacher’s union for whom I worked for 27 years; and of which I was an active member for quite a number of years before that. 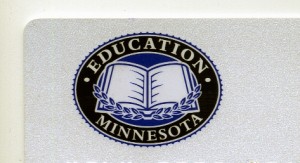 I told Mindy I was retired, had been a teacher years ago and spent much of my career representing public school teachers but no, I was not currently a teacher.
She said “I admire teachers. My brother is a teacher.” I asked where, and she mentioned some small place in Montana I’d never heard of. “We went to Montana State in Bozeman”, I seem to recall her saying.
The conversation was very short – she was busy and we were about to leave – but it is one of those messages that will live on for me.
It was a particularly heart-warming happening because a few hours earlier, in my town, I’d been to a listening session with our newly elected local legislator. There was the usual talk, heavily laced this particular day with how those Wisconsin public employees were bankrupting the State, and how we just had to get rid of those “bad” teachers. One of the 27 in the room was glad to darkly describe one of these – somebody from some long ago memory of one classroom event – interspersed with the usual “good old days” stuff about discipline and the like. She was a good storyteller, I’ll give her that.
It didn’t sound like there were many bad teachers employed in our district, but in some other towns there had to be these blights on the world who should be eliminated by some means or another. This brought up the problem with “teacher tenure”, which I pointed out was a misnomer…but I didn’t pursue since it would just create another unresolvable argument engaged in by people who probably don’t have a clue what the law is or how it works.(Here’s Minnesota’s).. All they know is that they’ve been told it’s bad.
I asked how you define a “bad teacher”, and nobody including the legislator was quite sure how you go about it. Perhaps there should be some kind of assessment of how students progress on test scores during the year, the new legislator offered. The legislator seemed to be working from talking points, and as I asked for some proof, she seemed happy to get rescued from the topic by other issues she was urging the audience to raise – fair enough.
The audience pitched in: issues like cutting health and human services; should the state help fund a new Vikings Stadium (the local NFL team); Racino (the latest version of legalized gambling in lieu of taxation); open bars on Sunday (apparently liquor store owners are against this, for some reason); an initiative to enhance carbon monoxide safety awareness brought by a citizen; how they could buy booze in grocery stores in California, why not here?; the problems and benefits of the Legacy Amendment (a constitutional amendment passed by Minnesota voters which dedicates a small percent to things like the arts, wetlands, etc.).
I was a bit depressed when left the meeting with the legislator, but nonetheless I was glad I’d come.
The restaurant servers comment made my day.
I’ve never been much for “vanity credit cards”, but that little conversation in Minneapolis has caused me to rethink this a bit.
As for getting to know your legislator, do it whether they’re from the friendly or unfriendly side. At the very least, they need your point of view, and speak up. Maybe somebody in the audience will be listening.
And the legislator wants to be reelected next time….
Last night I gave Mindy a good tip. Today I’m going to write her a note, and send it in a real stamped envelope. I know where she works….
POSTNOTE: The previous 14 posts on this topic begin with Part 1 at February 17.