To easily find this page in the future, simply enter the letters OTW in the search box for thoughtstowardsabetterworld.org.

UPDATE July 13, 2012
These are thoughts gathered over time which may help generate additional thoughts and ideas for readers.
1. Thoughts on Organizing:
A. An assortment of thoughts on The Future for Public Sector Unions – Part A: The future for public sector unions Part A
B. Early comments after June 5 on The Future for Public Sector Unions: The future for public sector unions C
2. Uncomfortable Essays here
3. Archival Items on building Community Relationships here.
4. Index of assorted thoughts on organizing at this blog site: Outside the Walls Blog Organizing
5. A message to younger teachers: AssociationYoungTeacherJuly12
UPDATE: August 22, 2012: Excellent commentary, Opening a New Front, on teachers, students, parents and the 2012 election can be found here. The writer, Alan, is retired, a former teacher. His posts, including this one, are long but I’ve found him to be an excellent source of information almost every day, and have subscribed (free) for a long while. 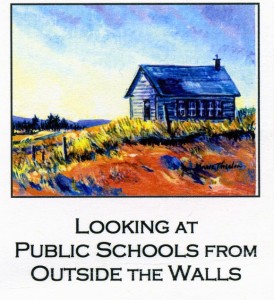 INTRODUCTION. This site, commencing May 3, 2011, replaces and is now the primary site for the still-existing-and-functioning Outside the Walls website (2002-2008). Contact site owner Dick Bernard with your suggestions and ideas (see business card below for contact information). If you wish to be a part of an e-list which may become an information sharing group, please provide your contact information.

DICK BERNARD INTRO: one minute 46 second video
Brief Bio: DickBernardBioMay11001
PURPOSE: This page is a continuation of earlier work (see next paragraph) which conveyed ideas from outside the Public School walls to help build positive relationships with the large majority of citizens who have no day-to-day relationship with the public schools.
OUTSIDE THE WALLS (the original site). After retirement from teacher union staff work in January, 2000, the author of this site, Dick Bernard, became interested in helping public schools, in particular, get more positively involved in what he calls the “Outside the Walls” community. This is described here. This site was active 2002-2008. There are approximately 59 short essays, each with timeless ideas, at this site, each describing some means of better connecting with the 75-85% of the population who have little direct contact with public schools. (See the last Archive here.. The four posts are examples of all the others, and, like the others, all still apply to the present day.) Here’s a suggested “lesson plan” for using the archived ideas: OTWideasWeb
INAUGURAL IDEAS MAY, 2011: Reader suggestions and content contributions are solicited for future use:
1. Thoughts on National Teacher Day, May 3, 2011, from Dick Bernard. Follow up column dated May 7 here. UPDATE: Comment on National Teacher Day May 8, 2012 here.
2. Floridian Marion Brady, is very, very actively engaged in education reform issues. His website is here.
3. OTHER OUTSIDE THE WALLS GROUPS AND ACTIVITIES can also be publicized here, such as a joint venture between retired and active teachers, students and community members, World Citizen’s Peace Education program for school teachers. World Citizen, of which I’m vice-president, is in process of moving its training program onto the internet. This process will take place during 2011-2012.
4. This can also be a space for ideas perhaps not noted in other venues. For instance, in 1984-85, there was a highly successful “Year of the School” called “Ah, Those Marvelous Minnesota Public Schools“. It was a year-long public relations campaign, with many ideas which, though many are now dated, are still worthy of revisiting. They can be found here: 1984 Revisited001
Thanks for stopping by. I hope you stop back again, soon.
Dick Bernard
dick_bernardATmsnDOTcom 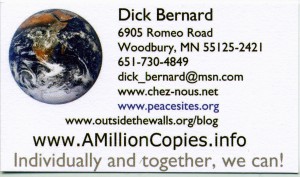