Thursday afternoon I went over to the Tomb, formerly known as the local DFL (Democrat) headquarters in my town. There were several staff and volunteers working to make order out of the chaos that such places become at the end of a long and chaotic campaign.
This was a Tomb, not a Nightclub after a drunken debauch celebrating victory. Tuesday night was a bloodbath for Democrats in Minnesota and elsewhere. There were bright spots, but still today they are hard to see. Our three area legislators, whose headquarters was this building, were all defeated by newcomers to elected office. This happened despite the fact that the incumbents were veteran, even-handed and highly accomplished legislators, all given strong editorial endorsements by the state’s largest and most influential newspaper…which liberals consider to be conservative (and conservatives, liberal).
Going across the parking lot I spied an “I Voted” sticker affixed to the payment. Somehow it had a message of its own, including where I saw it – probably already run over by several cars. 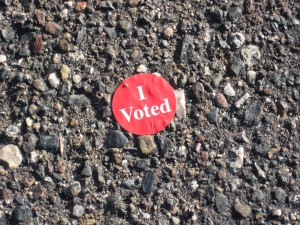 Death.
I struggle to make sense out of the abundant nonsense that is this election. The people spoke, and it remains to be seen what the long-term implications of their vote will be…for them. We seem to be a society that needs to blame somebody other than ourselves for certain happenings. So, Tuesday is the President’s fault. That is a dominant narrative I hear and sense from all sides. He’s a good, visible target.
Perhaps the President didn’t do enough change quickly enough…or too quickly. If so, was it wise to pretty dramatically increase the power of the party which not only had created the disaster in the first place, but had blocked all attempts to make needed change in our national infrastructure after our near economic collapse in 2008? Somewhere in there is the very definition of national insanity.
As is true in all mid-term elections – unfortunately – perhaps 60% of those who voted two years ago voted this year. The final numbers won’t be in for some time, but it seems that past will be prelude. [UPDATE DECEMBER 1, 2010: SEE HERE. Actual turnout in 2010 was about 88,000,000 compared with about 133,000,000 in 2008: 67%.] There will be endless reasons and excuses for not voting. Few, short of emergency hospitalization, wash with me. But that’s how it is. (Check here for some interesting data from past elections.)
Another interesting piece of data I saw this morning showed that Senior Citizens – my cohort – really turned tail and railed against change…especially fear of change in their Social Security and Medicare or their own beloved medical plan or doctor. Talk about throwing somebody under the bus, or Grandma’s “death panel”: large segments of my senior citizen cohort were apparently right fine with sacrificing the future for keeping our own benefits. The kids can take care of themselves….
Fear and Loathing of others: Muslims, illegals, liberals (like me) and the like also played into the vote.
The apparent second priority of the Republicans (getting rid of President Obama in 2012 is the first) is to make as much mischief as possible with recently passed health care reform. The signals are very strong.
(Interesting about those “death panels” bandied about in this campaign season: yesterday I discovered in a box of my Dad’s important papers, an envelope on which he had written “Living Will of Henry L. Bernard executed 3-8-91“. That’s 19 years ago. He died in 1997, and that Living Will came in handy. I know. I was there.) 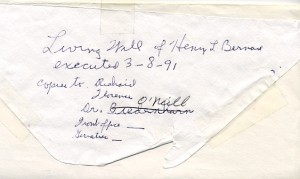 Finally (at least for this little essay) was the business of protecting the interests of those poor beleaguered wealthy people, and the huge corporations and banks, saved by “we the people”, who now worry they have been put at death’s door by re-regulation, etc. The peasant class rushed to the defense of the plutocrats, responding to the advertising these same plutocrats could fund without even revealing their identities. Only in America…. Last Sunday’s edition of “60 Minutes” had an unlikely witness to what we’re doing to ourselves. David Stockman, Ronald Reagan’s Budget Director, testified to the absolutely huge gains in wealth the wealthy have made in recent years. The segment, click here, is well worth watching.
Tomorrow, it’s three days since the American electorate took pen in hand and smote President Obama and the Democrats for not doing enough…or too much.
I come from a faith tradition that has a resurrection after three days in the tomb.
The three days are up. Time to look forward. We all have a huge mess on our hands…we all had a hand in creating it.
Related posts: click on November 2 and 3, 2010.