Last Sunday on the way into Minneapolis’ Basilica of St. Mary for Mass I stopped by a small group of people collecting a DVD Archbishop Marriage001 earlier sent to all Archdiocese Catholics. The DVD lobbies against the supposed threat of Gay Marriage, and promotes a Minnesota Constitutional amendment mandating that marriage be restricted to one man and one woman*.
I dropped off my DVD and asked Lucinda Naylor, who ordinarily sits near us in the Basilica, if I could take her picture (below). 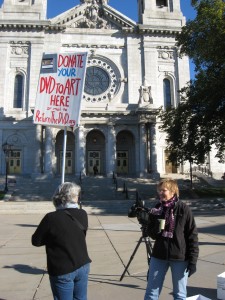 Lucinda had unintentionally become famous a few days earlier when she had written a Facebook entry about the DVD. The entry came to the attention of her employer, the Basilica of St. Mary. There was a meeting between the Pastor and Lucinda, and the result was her suspension from her part-time job as artist for the Basilica. Her liturgical art work for years has been a staple part of the Mass booklets distributed each Sunday by ushers like myself. The DVD issue, I am convinced, was not created by either the Pastor or Lucinda. It was dropped on both of them from outside.
The suspended employee, Lucinda, established a website which gives people an opportunity to recycle the DVDs into a sculpture she plans to make. The collection of the DVDs began Sunday, October 2. Similar collections took place at other churches.
At this writing, the drama continues. I have a great deal of respect and admiration for Lucinda; and for the Pastor as well. I know both people. She acted courageously on her convictions; the Pastor, whether he can admit it or not, was without doubt caught between “the proverbial rock and a hard place”. Basilica is not ‘his’ Church, after all: it is, like all Catholic Churches, real estate of the Archdiocese, and the Archbishop is the Pastor’s boss.
After depositing my DVD in the curbside box, I went inside for 9:30 Mass. More on that in a moment.
The next day, Monday, a very large photo, taken from the identical vantage point and essentially identical to mine, appeared on page A11 of the Minneapolis Star Tribune. The headline said “Taking a Stand Against the Church“, and showed Lucinda Naylor waving on Twin Cities Marathon Runners as they passed by the Church. The accompanying text included the phrase: “A spokesman for the Archdiocese of St. Paul and Minneapolis called [her action] a publicity stunt.”
Sunday morning, inside Basilica, the Mass booklet said that the presider at all of the six weekend Masses would be Pastor John Bauer. This is highly unusual. Normally there are two or three presiders.
I am sure the vast majority of us in Basilica on Sunday were waiting to see what the Pastors Homily would be. There was little doubt about the topic; the only unknown was exactly what he’d say.
Basilica is a welcoming and diverse place, and Fr. Bauer made specific reference to the greeting at every Mass: “Whatever brings you here and wherever you are at on your faith journey, you are welcome here.” It is a theme that the Basilica lives. It fits my Parish.
The rest of his brief message spoke gently to the issue that had Lucinda out on the sidewalk: “Parishes are much like families“, he said, alluding again to something he’s said before: that in his own family, members tend to cancel each other out in Presidential elections. He pulled a quotation from, he recalled, James Joyce: “The word ‘Catholic’ means ‘here comes everybody’ “. And then he quoted from an e-mail someone had sent him during the tense few days preceding this Mass: “I stay [in the Church] because I want the Church to be the Church I want the Church to be.”
Finished, Fr. Bauer received warm applause (unusual in our setting, regardless of the preacher or message). I was among those who applauded.
But that applause doesn’t mean this issue is over; by no means.
As I was drove home I thought in particular about Fr. Bauer’s “family” analogy.
In this case, there is a huge difference: the Archbishop, with the help of what had to be a huge anonymous donation, sent out hundreds of thousands of these DVDs which spoke from Power to Peasant, as it were.
Lucinda is one of those Peasants; I another.
The Archbishop didn’t ask our opinion. He didn’t care. His wealthy financial benefactor hid in the shadows of anonymity. So be it.
For some reason I thought about action organizing in such a case of power versus powerless and I thought back to a favorite book from childhood, Gulliver’s Travels. Gulliver, as most will remember, traveled to a place called Lilliput, which was inhabited by ant-size humans who were no match in any way for the gigantic normal sized human, Gulliver.
At least, the Lilliputians were no match for him on his terms.
But one night Gulliver fell into a sound sleep, and the next day when he woke up, he was tied to the ground, and couldn’t move.
The Lilliputians had put Power in its place.
“Publicity stunt” indeed.
Go, Lilliput!
Postnote: a YouTube link from a friend, a Dad, whose son is Gay.
*The Archbishops DVD can also be found on YouTube.
Watch this space in coming days for a commentary on a Marriage in Quebec in 1730.
https://thoughtstowardsabetterworld.org/wp-content/uploads/2022/04/thoughts-300x138-1.jpg 0 0 dickbernard https://thoughtstowardsabetterworld.org/wp-content/uploads/2022/04/thoughts-300x138-1.jpg dickbernard2010-10-06 10:56:212010-10-06 10:56:21#254 – Dick Bernard: A DVD Drama at the Basilica of St. Mary