Every now and then, if one pays attention, someone wanders into their life and makes a difference just by being who he or she is.
For me, one such person is Lynn Elling, Minneapolis, closing in on 90 years young, and 67 years of marriage to Donna. 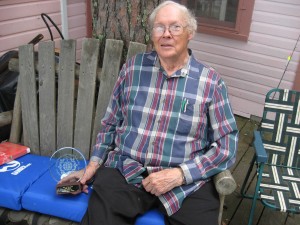 Lots of us want to make a difference. Lynn’s experience as an LST officer in the War in the Pacific 1943-45 compelled him to seek a better way to solve problems than war, and a visit to the Hiroshima memorial in 1954 cemented his “driving dream.” I’ve previously told most of his story at a website I dedicated to one of his major accomplishments. It is here. I am privileged to be on the Board of the organization he founded, World Citizen, whose mission is Peace Education for teachers, as well as Peace Sites, Peace Poles and the Nobel Peace Prize Festival at Augsburg College, Minneapolis, for school children. The Nobel Peace Prize Festival is an annual event in the Twin Cities which honors the Nobel Peace Prize Laureate. Next years date: March 4, 2011. The laureate is President Barack Obama.
Lynn was, it seems, born to lead. I was at Big Sandy Lake near McGregor MN last Saturday, at his invitation, for the annual gathering of the Big Sandy Lake homeowners association – a 500 homeowner group which has Lynn’s palm prints all over it. At the picnic he and Donna were recognized for their leadership, particularly in establishment of a Big Sandy Community Foundation to help preserve the lake environment as well as contribute to the greater surrounding community. A week or two earlier he had been honored for his work on Peace at the Concordia Language Villages camp near Bemidji (in the above photo, he’s holding a memento he received at that event.) I know he was President of his Church Congregation in Minneapolis, and on and on.
No question, he’s been a driven man, driven by his driving dream of Peace amongst all peoples and nations.
Outside the door of their cabin – a place he’s known as his lake home since he was two years old – is a symbol of his dedication to Peace. 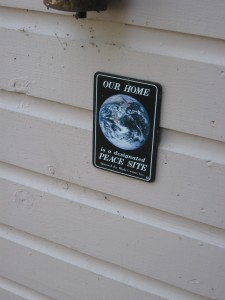 The designation of the Elling's cabin as a Peace Site

Anyone, any place, can become a Peace Site. The information is here. Check it out. The importance of being a Peace Site is symbolic, yet substantive. It gives witness to a place of Peace.
Thanks, Lynn and Donna, for your witness to Peace over many years. 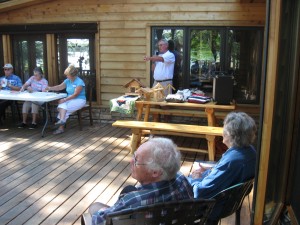