I arrived late for the Dakota County Softball League Championship Picnic on August 17, and as I got out of the car I heard the beginning of the singing of the Star Spangled Banner. I turned around and in front of me was the American flag, backlit by a brilliant sun, and as much instinctively as intentionally, I stopped in place, took off my baseball hat, and paid attention to the national anthem as beautifully sung by two young women somewhere in the park.
It was a perfect start to a perfect three hours on a pleasant Tuesday afternoon at Aronson Park in Lakeville MN. 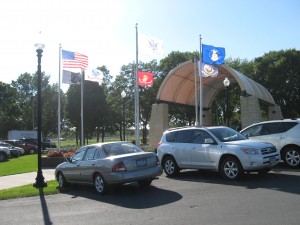 During the Star Spangled Banner August 17, 2010

The event was, I guess one would say, the “World Series” for a bunch of truly exceptional adults, one of whom is my daughter, Heather (photo below). The program listed a dozen teams, roughly half in the “A” League, the other half in the “B”. Heather’s team was vying for 5th Place in their Division. 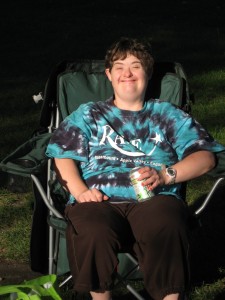 After the national anthem, and before the games, came the picnic for about 400 of us: players, coaches, families and friends. Fried Chicken never tasted so good! Heather’s sisters and their families were there, as well as the family in whose home she lives with two other exceptional adults. We sometimes joke with Heather being “the Queen”. For sure, on Tuesday, she was! Her own cheering section was “in the stands”.
After the picnic came the game. Every player came to bat, and spent time as fielders. Can’t say I saw any double plays or ‘out of the park’ home runs, but I was truly at the World Series! Heather is a big sports fan. When she came up to bat, she did the routine, “knocking” the dirt off her sneakers; doing the stretching exercise with the bat before coming to the plate – the whole nine yards. She rapped a couple of near-hits. While in this particular game she didn’t actually reach base, it made no difference at all to anybody, including herself. She’d shown up and taken a cut! 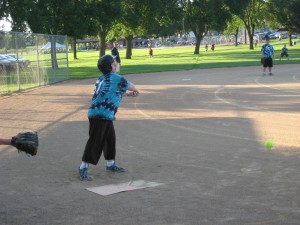 The mighty Heather taking a cut at the Plate

Game over – each game lasts an hour – Heather’s team, Rave Red, was on the short end of an 8-4 final score. The way some people would see it, they came in last in the league.
But you wouldn’t know it from the players, the coaches, the fans in the ‘stands’. They were winners, as they congratulated the opposition, and ran the bases one last time for this season, and received their trophy for a truly winning season. 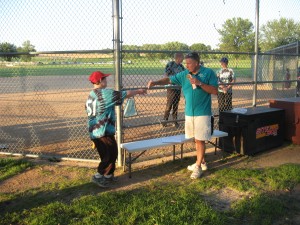 Before the game, I made a side comment to Jeff, who’s a good friend of mine, one of the volunteer coaches, and parent of one of the athletes.
“Without volunteers, this country of ours would collapse“, I said. He agreed. We are bombarded daily with all sorts of very bad news about us; it is good, sometimes, to take time to identify the good – and there’s lots of that, too.
So to all the unsung heroes, especially those folks who make things like the Dakota County Softball League happen, including the players on the field, I offer my heart-felt thanks and Congratulations!
You make my day. 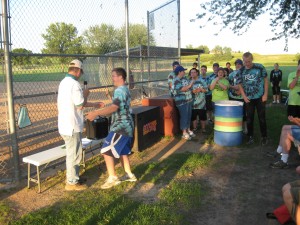 Coach Jeff gives an Award to one of his players after the game. 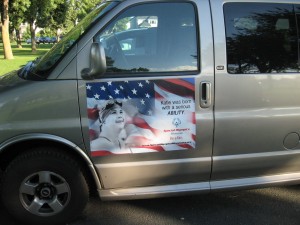