July 22 I took the four hour training required to be an Election Judge in Minnesota. A half dozen instructors from the County Elections Department led the 30 or so of us in attendance in the mind-numbing process of at least seeing, one time, the kinds of things a judge needs to be aware of on election day. Judges are required to reveal their party designation, Republican, Democrat or Independent. On election day you will see lots of pairs of judges: one of one party, one of another. It is important, and in my experience the judges take their duty of non-partisanship seriously.
Yesterday I voted absentee for the Primary Election which is next Tuesday, August 10. That process, too, went easily and orderly. The person who gave me the ballot took her job seriously. While there is much heat about a minute number of scoundrels playing fast and loose with the rules (criminals voting, and the like), the odds of such happening are infinitesimally small compared, even, with the even worse scoundrels suggesting foul play in elections. While the odds are certain there will be mistakes made by citizens like me who are judges in any elections we are trying to do our best and the process works extremely well.
In between July 22, and August 2 was an interesting time period for me, a time of getting involved in my parties activities.
Here’s a small photo gallery and commentary on the hard – sometimes agreeable but not always – work that candidates have to do to get noticed by an electorate. 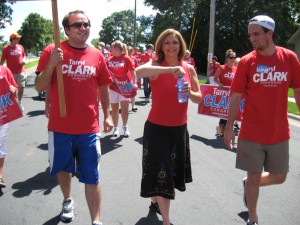 Tarryl Clark, candidate for Congress in Minnesota's 6th CD, marches in the Lumberjack Days Parade in Stillwater, Sunday July 25. She had just returned from a speaking engagement at a Convention in Las Vegas.

Tarryl Clark was in Las Vegas for the Convention of a group called Netroots Nation, and introduced U.S. Sen. Al Franken there. She said that they had knocked on 4,000 Nevada doors during her time at the Convention – door knocking is a staple of local politics. A California friend of mine, Jane Stillwater, was at the Convention and said this: “I had the honor of meeting Clark at her event…Sadly…not all that many people showed up. But I did! She was in competition with people getting ready for the big Kos party, plus the main speaker ran late that evening. But Clark served dessert!…Wish I could do more to help. I gave her ten dollars. And a hug.”
I thought about that $10…if every voting age American gave an average of $10 – and only $10 – to help their choice for representative get elected, that would mount up to about $2 billion. You cannot get elected for peanuts in this country. Most don’t contribute at all. 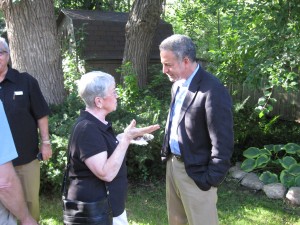 My spouse, Cathy, is a big fan of Russ Feingold, and she is talking with him at this lawn party. As with Tarryl Clark and all candidates for major office regardless of party, fundraising has to go across state lines. It would be good to have public financing and strict limits on campaigning but until that happens, candidates need to meet and greet wherever they can. The public exposure is essential. 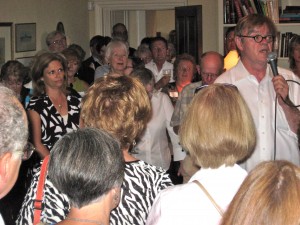 Garrison Keillor introduces Congressional candidate Tarryl Clark at a fundraiser at his home on July 28.

I would suppose most of us really came to see the Keillors home on Summit Avenue in St. Paul (nice place). But here too, celebrity fundraisers are critical assets in a campaign. Keillor put on a mini-Prairie Home Companion in his living room. We were packed in like sardines…and loving it. On leaving, I noticed a very large pile of fund-raising envelopes.

Peter Woitock, an organizer for a non-partisan organization, Working Famillies Win, meets with a group of interested citizens on July 29.

People like Peter are unsung heroes, young folks doing the scratch organizing that is so difficult in these polarized times. His group wants to get grassroots and non-partisan progressive oriented conversation groups off the ground around the country. I really admire people like him and support them however I can. Check out Working Families Win.
Politics is a grind, but a most important one. Every one of us is Politics.
Get involved. It’s productive and important work for our democracy.
Minnesotans: get out and vote on August 10.
https://thoughtstowardsabetterworld.org/wp-content/uploads/2022/04/thoughts-300x138-1.jpg 0 0 dickbernard https://thoughtstowardsabetterworld.org/wp-content/uploads/2022/04/thoughts-300x138-1.jpg dickbernard2010-08-04 14:04:472010-08-04 14:04:47#219 – Dick Bernard: The Practice of Politics