There was a particularly remarkable moment at the closing program of the Initiatives in French Annual Conference in Bismarck ND July 10.
We had been treated to an evening of wonderful music and dance with a French flavor. The performers were Metis, Native American, African, and Caucasian. They performed ancient and modern music from West Africa to the North Dakota Indian Reservations to the traditional music and dance of the French-Canadian settlers to the Midwest. In common, they celebrated elements of the French culture, which they either represented, or were part of by native language or ancestry. It was a very rich evening.
The final number brought all the groups back to the stage and they improvised together. It was absolutely delightful. Here’s a photo (others from the program are at the end of this piece): 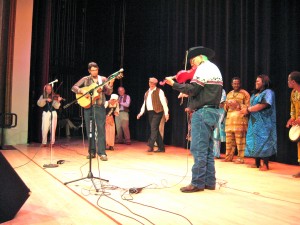 The U.S. is without any question a multi-cultural nation, in a multi-cultural world. Every world culture is represented within our borders. Increasingly, this is true of other nations as well. This reality can complicate relationships and, worse, can be used to fuel division and dissension through fear. The IFMidwest aim is to celebrate this diversity, and build bridges across boundaries of geography, language, race, culture, tradition….
This bridge building is not easy. On that single stage on Saturday night were performers from Togo, Cameroun, Congo (Zaire), and Cote d’Ivoire – all African countries whose official language is French. (One of the performers – I believe from Cameroun – said that in her country alone there were 218 different tribal cultures, each with their own dialect.) Within my French-Canadian extended family, I have cousins whose first language in Canada is French, including some who have considerable difficulty communicating in English. Then there’s me, who was never exposed to French, even in a school elective course, and is thus language handicapped when someone chooses to speak French, as happened on occasion on Saturday night.
The organizers of the Bismarck conference sought to implement the idea of Heritage as defined by the United Nations Educational, Scientific and Cultural Organization (UNESCO).
As identified in the conference program “1. …Heritage consists of the worlds natural environment, its history and social institutions and its human spirit to imagine.
2. Examples…in the natural environment are the prairies, bodies of water, wetlands, mountains, oceans, buttes and bluffs, etc. In our social institutions and history, they are schools, families, businesses, farms, ranches, parishes, libraries, and museums, etc. The third heritage, that of the human spirit is found in paintings, stories, drama, the interpretation of history, politics, in moving speeches, music, sculpture, architecture, and daily customs we cultivate from cuisine to gardening.
3. Living heritage…consists of reflection on our past and the pursuit of relationships with the elements that constitute Heritage. Study in genealogy or other aspects of Heritage develop our curiosity, causing us to raise such questions as where our ancestors lived, how they fit into the society of their time, and what motivated them. Living heritage leads to new relationships among the three areas UNESCO defines as heritage.”
During the year preceding the conference, indeed for the previous 30 years, I had been delving into the “living heritage” component of my own family, culminating in a 500 page family history I brought to the gathering. So, the issue was very fresh on my mind.
At the end of the conference, I delivered to the Director of IF Midwest three large boxes full of material I had used for my book. They now reside in the IF Midwest archives at the University of North Dakota in Grand Forks.
As I picked up one of the boxes, in which my father’s papers had been stored for many years, I noticed on the end of the box something I had never seen before: whichever company had made the box included instructions about its contents. The instructions were in English, in French, and in Spanish. American business has, for some time, really, come to grips with a reality that we all need to face as Americans. We are not, and will never be, a place where one language and one language only will dominate. Best for us to learn how to make the best of the abundant riches that come with our diversity. 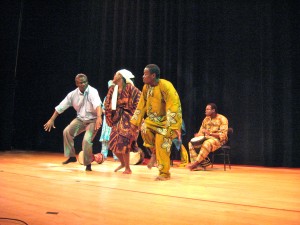 African Arts Arena of Fargo and Grand Forks joined by a member of the audience. 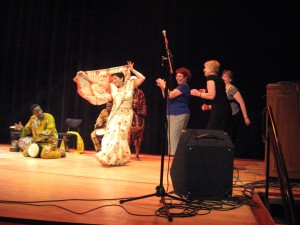 Members of the audience join the on-stage performance 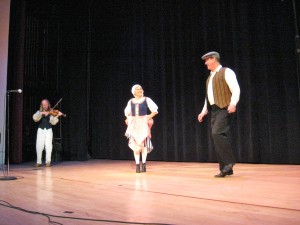