Saturdays post brought an emotionally powerful response from our friend, Annelee, who grew up in Nazi Germany and was 18 when the war ended in May, 1945. Her comment, here, is worth reading, carefully, and applying to our own lives.
Sunday morning, enroute to Church in downtown Minneapolis, I met two buses whose signage said their destination was “State Fair”. Today, Labor Day, is the final day of the 12 day gluttons paradise. I like the Minnesota State Fair, and indeed was there last Monday, and if the spirit moves me I may go for a couple of hours early today as well.
(click to enlarge) 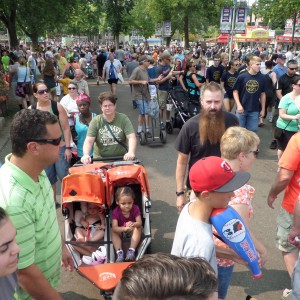 Meanwhile, back in reality-land, the picture of the drowned little boy is a haunting one, and if I end up at the Fair today, my view will be modified by events of the last few days in Europe and the Middle East.
A thought came to mind: last Monday I indulged in my once a year addiction there: deep fried cheese curds. They were advertised as having the same price as last year, $5.00, a “heckuva deal”, but the container seemed smaller than previously – perhaps a marketing strategy, less curds for the same dollars. Whatever. I bought ’em, and ate ’em and, as always, wondered why, afterwards. See them next year….
It also occurred to me that if everyone of us in the U.S. ponied up $5.00 one time, it would raise over $1.5 billion to bring help wherever needed. My $5 could be that single order of cheese curds that I certainly don’t need.
Meanwhile “over there”, the World Food Programme – one of the spinoffs originally part of the United Nations – announced it was out of money to provide minimal food relief to Syrians in refugee camps. This may have been to spur donations. It survives through international donations, including from the World Food Programme-USA.
On the news Sunday afternoon it was suggested that the U.S. State Department has devoted $4 billion to help alleviate the situation, but I’ve learned in the past to not trust numbers without more elaboration. I looked at the Department of State website and while it is a very interesting site to review, nowhere did I find such a declaration.)
Of course, I doubt many at the Fair tomorrow would think about giving up even $5 of their fun budget to help the refugees who are in Europe and those in desperate need in Syria and elsewhere. It is all so confusing. “Who can I trust with my money” is a common, and even rational, question.
And even the apparent U.S. Federal Aid of, they say, $4 billion, which seems generous, might be at least partially allocated to, for instance, the Department of Defense for war. (Though I don’t have facts on this, this isn’t a hypothetical concern. I once tried for nearly two years to get the Department of State to break down for me its own news release granting $50,000,000 Aid to Haiti in late 2003. They simply would not comply, though by the time I finally gave up, I had learned that the $50 million had gone to the Department of Defense to protect American interests, and to U.S. AID (Agency for International Development), the latter almost certainly for political destabilization of the then-sitting and democratically elected government in Haiti that the U.S. didn’t like. But it was very obvious that no one wanted me, or anyone, to know where that $50 million really went, if it existed at all.)
My sole point in all of this: I am not – none of us are – in a position to constructively change world policy on humanitarian aid in times of crisis, even if we know it is crucial. A few months wait for someone who is starving doesn’t work for the starving person. The money needs to be there, somewhere, to get used when it is needed. An at-best confusing system of assorted charities dealing with emergencies is not adequate. That is why I need to lobby harder for national and international systems, like a more effective and empowered United Nations, that is ready to step in whenever and wherever there is a humanitarian crisis as is now the case in Syria. Only there can my $5, or $10, really make a difference right away. 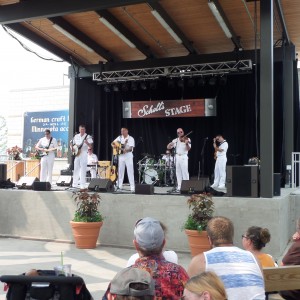 A final note: on that Monday at the Fair, I came across a wonderful U.S. Navy Country and Bluegrass music ensemble (above). They were so good, I came back to a second show at the Fair. You can catch them in several segments on YouTube.
At one point the leader recognized his fellow servicemen and women, “taking care of business” around the world to protect our American way of life. His was an applause line, of course, as when he asked we veterans to stand and be recognized as the service anthems were played. But herein is one of our national dilemmas. As a nation we are incomprehensibly wealthy compared to most, and our great wealth blinds us to the needs of others, including the poor in our own country, and our obligations to devote more of our resources in others behalf.
Are we able to learn? Can the little Kurdish boy who drowned help teach us a lesson that will endure?
POSTNOTE: Our initial contribution – $100 – today goes to the American Refugee Committee. They know the trade, and I know them from experience.
Comments, if you wish, to dick_bernardATmsnDOTcom.
https://thoughtstowardsabetterworld.org/wp-content/uploads/2022/04/thoughts-300x138-1.jpg 0 0 dickbernard https://thoughtstowardsabetterworld.org/wp-content/uploads/2022/04/thoughts-300x138-1.jpg dickbernard2015-09-07 00:39:312015-09-07 00:39:31#1059 – Dick Bernard: The Little Kurdish Boy who Drowned, continued.