A reader took umbrage at something I said in yesterday’s post on the Wisconsin stand-off at the State Capitol.
The comment was succinct: “Enough of the…bashing [of the power group to which the writer belongs]. Please remove me from your email listing and future emails.” The writer is a prominent actor in the political arena with a lot of influence in the legislature.
I decline to remove the writer from the distribution list. He can delete the messages or mark me as spam.
Initially I was puzzled by what the writer could be reacting to. But as I thought about it today, there were a couple of comments in the previous post which could be interpreted as “bashing” of his constituency.
But I left out of that post most of the rest of the story.
My parents were career public school teachers in the good old days before there was any such thing as “teachers rights”. They were phenomenal people, both of them. No taint of scandal or performance deficiency followed them in their career (excepting my mothers first year as a teacher, in 1929-30, when she was scarcely 19, and several of her country school students were almost her age. She resigned at Christmas time and went home.) Both took their work very seriously. But they were always – always – outsiders.
They, especially my Dad, kept records. As I write, in plain sight in front of me, is a brown folder which contains 67 of their teaching contracts. Four of my mothers contracts in the early 1930s escaped the folder, but all the rest are there. For a total of 71 years they taught public school in numerous places. 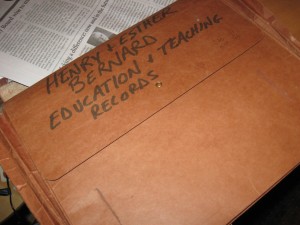 Every single one of these contracts was ‘at will’ of the local school board which could decide whether or not to rehire for the following year, whenever it wished. There were even circumstances, in the 1930s, when the tacit agreement was that the contract, even if signed, may not mean anything. They’d be paid if the district had the money. Long and short: every year when they signed their contract, they knew it was for a single year. The next spring they could be let go for any or for no reason whatsoever. Cause didn’t matter. There was no due process. They were well educated migrant workers.
In return for that contract, they did everything that was asked, and more. Dad didn’t like to coach, but sometimes he had to coach because there wasn’t a coach available. Often there were implicit rules that married couples wouldn’t be hired because, together, they made too much money, by community standards. Those community standards required them to do certain things, and not do other things. Sometimes those were in the contract; sometimes not.
By 1948 they had five kids, but could never plan anything for sure past the end of the school year. Perhaps they’d be back; perhaps not.
Those stories don’t appear in the folder in those pieces of paper called Teacher Contracts. The rest of the stories took life through the stories my Dad told me in later years.
They retired with dignity, living in tiny houses and a frugal lifestyle. It took two retirements to survive.
They didn’t complain.
So when I watch the fat cat politicians and others posture in Madison and elsewhere, and watch those union members in the street challenging what lawyers would describe as ‘arbitrary, capricious and unreasonable’ attempts to remove hard fought rights, I side with those folks on the street. They’re fighting for survival.
I don’t really care about the details of the items at issue. That is for the parties themselves to sort out in two-sided collective bargaining.
My parents are long dead. I do wonder how they’d see the situation in Madison these days.
They didn’t bash their school boards. They just moved on, and uprooted we kids each time that happened.
But, unfortunately, plenty of those boards well deserved some bashing….