Back in April, my son Tom alerted me to watch for a package containing a Sock Monkey. It was in Michigan, he said, and our home was its next stop. When I received it I was to let people who knew his daughter (thus my granddaughter) Lindsay see the monkey, and write a note or such wishing well her and her-husband-to be Jeffrey.
We talked by phone, and Tom mentioned that the monkey was his idea. He could remember seeing such a monkey at some relatives house years earlier, and he thought it would be a neat idea to have a Sock Monkey carry a message of good wishes to the newlyweds.
It was certainly a neat idea.
Sock Monkey came, and I got into the task far more so than I had expected.
Sock Monkey went out to North Dakota to the ancestral farm, and took a photo with Tom’s grandmother’s brother and sister.
Back in the Twin Cities, the Monkey got around, visiting all of the places that Tom had lived and gone to school before he migrated to Colorado many years ago. Sock Monkey posed with Tom’s sisters and their families, and with friends.
I worried about misplacing, or forgetting, the Monkey in its makeshift home – a small packing box.
Memorial Day we began our trip west via the Black Hills with an overnight in the famous Wall S.D. Sock Monkey got free ice water at the Wall Drug (well, figuratively speaking); made a call out west from the phone booth in front of the drug store; posed with the dinosaur, and was pretty generally was a pretty typical tourist. Walking through the Wall Drug with the Monkey I found a whole rack full of Sock Monkey’s! The friendly monkey had a family reunion, right there on the Main Street of Wall!
We drove on, through eastern Wyoming, where Sock Monkey (below) took a moment to perch on the dashboard and take a look at Wyoming’s scenery. 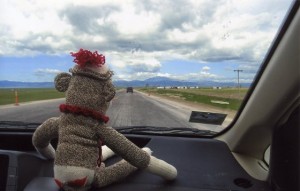 Sock Monkey gets undivided attention at the Wedding Reception 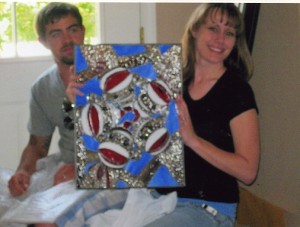