Been a spell since I’ve posted here. No particular reason. Maybe time for a break…the beginning of Memorial Day Weekend seems a good time to break the silence.
A little over a week ago I took a trip out to North Dakota to visit my Uncle and Aunt who live in an assisted living facility in tiny LaMoure ND. There was no particular reason for the visit – just a bit overdue. The 6 hour drive out, and then, back, was about the hardest “work” I did.
The days were perfect spring days.
One morning – it was a Thursday – I went to join my kin and their fellow residents for breakfast. I was early, so I decided to sit outside and watch the world go by before 8 a.m.
In a town of 1000, as LaMoure, there really isn’t much of a “world” to pass by, but my bench was on the street heading to the local public school just one block away.
It was the last day of the school year this particular morning.
A solitary kid came by with a backpack as big as he was, made a right turn heading up the block to school.
Across the street, another kid came by on a bicycle and saw someone he knew in their yard, and said “hi Mr. ___”, startling the man who was walking towards his car. The man, probably my own kids age, said “hi” back, got in his car and drove off to wherever his day was taking him.
It was only a block to the school so I took the short walk to the front door. A little ahead of me were a couple of young girls dressed in the simple style of Hutterites, who have a community nearby. They were quietly chattering. One went in one door, another in the other.
I stopped to look at a monument in front of the school which featured the school bell from the old building which had occupied the block where the Assisted Living facility now stands. I looked at the plaque explaining it, and it had been a project of the local Boy Scout troop some years back.
Another kid came in the door, and I left.
Back at the facility, my bench faced the American flag on the flag pole. It had seen altogether too much North Dakota wind. I decided it would be a good family gift to the residents, and later went downtown to the Hardware store to pick up the flag. Almost immediately it was installed by the appreciative administrator.
Other happenings, at the local Drug Store, Gasoline station, Grain Elevator; a brief visit with some old friends; the news in the local paper, the LaMoure Chronicle…. All added positively to my visit.
Before I left town, I went up to my uncle and aunts apartment, and outside the window saw the flag billowing in the wind. I took a photo.
There are a great plenty of problems in our society and in our world. Yes, the local LaMoure paper has police happenings, and Cable TV is ubiquitous everywhere.
But it was good, on those three days in North Dakota, to notice the other and (I believe) still dominant side of American society. Basically we are a bunch of good people trying to make a positive differences.
This Memorial Day I prefer to focus on the bright side, the good side.
Have a great weekend. 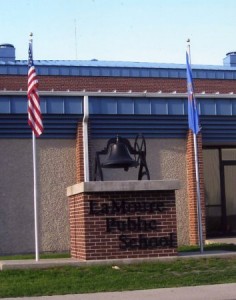 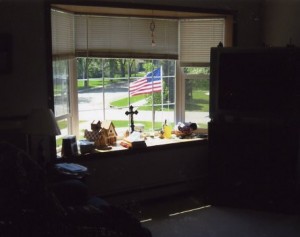