Thursday I had the opportunity to drive author Paul Loeb from place to place in Minneapolis. Paul had spoken the previous evening on the new revision of his best-selling book “Soul of a Citizen”, and as authors do when their new works are published, he was making the rounds, and we had a few minutes to chat. It was an interesting and stimulating afternoon. (The book is inspiring and stimulating. Check it out.)
I was a little late picking Paul up, and had an excuse. Right before I left home, the phone rang and a friend of my wife was on the other end. Cathy wasn’t home, so I was about to simply take a message, but the friend – let’s call her Joan – needed to give somebody a piece of her mind. Usually it would have been Cathy, who’s stuck with this friendship for years. Today it was me.
Joan, who I don’t know very well, works for a medical products corporation in a major city and is by all accounts pretty successful. I gather her salary is somewhere in the lower six figures; she has a couple of million in her investment portfolio, and it would be more except for some financial manager who made very bad decisions with her money some years ago. She’s never been married, and somebody has advised her that she needs a nest egg of $5 million to have a decent retirement…. She’ll probably make that goal, but she will not be satisfied with reaching it. So it goes. It’s Joan against the world; nothing will ever be enough.
But that wasn’t her litany on Thursday noon.
She had been at a meeting at Corporate that morning, and it was said that because of higher taxes as a result of the Obama Health Care Reform they were probably going to have to lay off people, and furthermore, new people she needed for her own department could not be hired. It’s Obama’s fault….
I told her I couldn’t agree with her, but I didn’t have time to get into an argument, since I was already running late.
I have no idea if she was telling me “facts”, or just her interpretation of what was said in the meeting. Similarly, I don’t know if the company spokespeople were telling facts, or just their interpretation of facts, for their own reasons. You never know.
Had she continued, I know she would have gotten into her favorite topics: teachers get paid too much and besides have three months paid vacation; welfare is disgusting – she works hard, and they don’t work at all; taxes are too high, and on and on and on. She is relentless.
Meanwhile, Paul Loeb was talking to another type of audience that could easily be said to be polar opposites of Joan. He was puzzled that progressives seemed to write off Obama as a failure after only a few months on the job; and worse, it seems that many feel that their only duty was to vote in a new President, and then leave the work up to he and the other politicians to accomplish, essentially, with little or no support.
In this unholy mess that is the United States of America, there are lots of people who are befuddled, some intentionally, and plenty of fools, oftentimes fooling themselves. Some of these folks we know pretty well: some are us.
We seem to expect that are simple solutions to complex problems, so Joan, who probably doesn’t even vote, is content to complain about her circumstances which are extremely good compared to most of her fellow citizens. That doesn’t make any difference to her.
And the beat goes on. 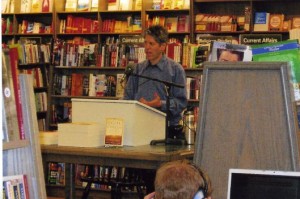