Today is my Dad’s 102nd birthday (he passed away in 1997, not quite reaching 90.) He’s more on my mind than usual this year because, for the last several months, I’ve been trying to summarize 400 years of his French-Canadian ancestry in North America. I’m in the home stretch, now, thanks to many people. I’m calling the document “The First 300 Years”. It ends with Dad’s birth, December 22, 1907, in Grafton ND. It has been a fascinating, difficult, project. I’ll be glad when I can say I’ve finished it (probably in January.) 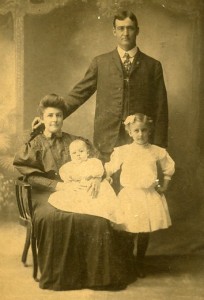 Josephine and Henry Bernard in 1908, with youngster Henry, and his sister Josie.

Dad was a tall man: he reached his adult height of 6’3″ about 8th grade – very unusual for those early days. His height gave him no particular advantage. He was a gangly kid, and he had big, flat feet – size 12 if I recall rightly. His nickname of “Boy” (when he was born the doctor said “it’s a boy”) stuck with him his entire life.
Dad’s big feet helped caused me a broken leg in 7th grade. He had a hand-me-down pair of racing skates – the ones with the very long blades – which were size 13. This particular day, at the schoolyard pond across the street from our house, I put on those huge skates, ended up on the end of “crack the whip” with a bunch of kids, fell, and broke my leg. It was my first experience with Dad’s shoes.
I got to thinking about Dad and his shoes a few days ago, when I took down his insulated walking boots from the shelf. I like to walk outdoors year around, and sometime back around Dad’s death, I “inherited” the walking shoes he used in the winter at Our Lady of the Snows, the place at which he lived his last ten years, in Belleville IL. I’m size 10 1/2, so his boots are a little large, but with heavier socks they fit just fine, and they’ll do me all winter. Unlike Dad, they haven’t “kicked the bucket” yet, and my guess is that they have more years left in them.
Here they are, a couple of days ago… 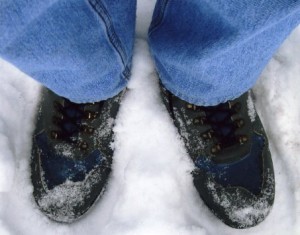 A few years ago, one Christmas, I gave each of my kids and the then-grandkids one pair each of my beat-up old shoes (I don’t easily throw stuff in the garbage!) I’m a couple of grandkids behind (this year they’ll get theirs – I’ve got two pair in mind!) The gift of the old shoes was, I admit, a bit on the odd side, but it was a gift.
On this day, Dad’s 102nd birthday, Dad’s Big Shoes come to mind. Whatever his good points, or deficiencies (like us all, he certainly wasn’t perfect), he cobbled me together, and then sent me on my merry way to practice, imperfectly, life.
I’d guess that every one of us, in one way or another, male or female, had similar Dad or Mom stories…about their Big Shoes and how they helped us grow to what we have become.
Doubtless my own kids have Dad stories about me.
I hope most of the stories are at least a tiny bit positive!
Happy Birthday, Dad, and Merry Christmas.
https://thoughtstowardsabetterworld.org/wp-content/uploads/2022/04/thoughts-300x138-1.jpg 0 0 dickbernard https://thoughtstowardsabetterworld.org/wp-content/uploads/2022/04/thoughts-300x138-1.jpg dickbernard2009-12-22 05:19:132009-12-22 05:19:13#135 – Dick Bernard: Dad's Shoes