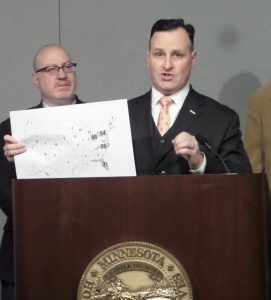 (click on photos to enlarge)
I took seriously the notice: “Join us as we support Representative John Lesch at 11 am on Monday, December 19, in State Office Building Room 181 for a press conference announcing a National Popular Vote bill for Minnesota,” getting there not long after 10:30. Had to ask the guard where Room 181 was, and got there and found it dark and empty. Had I received the wrong memo? Well, at least I had the best seat in the house…but not for long.
By 11 a.m. the room was packed like sardines and Rep. Lesch and four or five legislators and four news cameras and at least one newsman, Pat Kessler of WCCO-TV. Rep. Lesch gave a brief statement; there were a few questions; the meeting adjourned. Those in the Twin Cities will see it on the news tonight, and read about it in the papers tomorrow. A main point made by the Rep. was the map he was holding (see above photo): that campaigns concentrate on just a few states in the battle for an electoral win. Of course, Trump garnered immense free and daily publicity from the national media – another issue for another time. 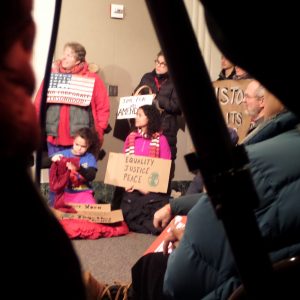 Stripped to its essence, the proposed bill simply mandates that the states abide by the national popular vote. It is not an amendment to Article II of the Constitution of the U.S. (u-s-constitution-art-ii001) Once enough states, totaling over half of the electoral vote (261 currently), agree, the popular vote would control the election outcome.
The Minnesota proposal is one of many proposals through the U.S., and is bipartisan. Of course, the road to approval is a long one, but worth the effort and worthy of watching. Also, there are other proposals of other sorts.
Meanwhile, a block or so away Minnesota’s electors were, I am sure, preparing to vote for Hillary Clinton as per the Nov. 8 election, as other electors in other states more than likely were voting by their electoral vote rules, electing Donald J. Trump.
News Conference over the legislators departed. As I say, the room was packed with advocates. Good friend, Barbara Gerten, Network Representative for Minnesota Move to Amend, was there. Bundled up such as to be almost unrecognizable, she said hers was one of many organizations represented at todays demonstration at the Elector convening nearby at noon. Her organization, here, is worth getting to know. As I say, hers was one of a number of different groups represented. It is an important part of a large national coalition, here.
The temptation is to say it won’t make any difference.
I disagree. An energized citizenry can make a great deal of difference. It is necessary, however, to keep after the goal; too often we defeat ourselves. One demonstration, one news conference, is not enough.
Learn the issue, and get in action. More in a later post. I have opinions about Donald J. Trump and the nature of his “revolutionaries”. Not nice people…. 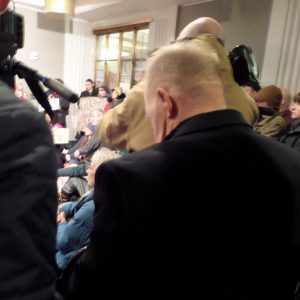 Pat Kessler, WCCO-TV, covering the story. He was one of few newspeople there, it appears.

COMMENTS
from Madeline:
Hi Dick,
Looked for you. I never went to the 11 am press conference. There were a lot of people rallying near the building where the Electors were to meet. Most were there around 11 and definitely at 12–I wanted to make sure the biggest crowd got video taped. About 12, some started entering the building for the EC Assembly. I waited til things thinned out (lots went in; some may have left; a few stayed outside). Inside I ended up being in second over-flow room. We had video screen of the proceedings with standing room at the back.
Outside from time to time were news cameras from channels 11, 5 and perhaps 9 that I was aware of. Inside, Fox 9 video streamed the entire proceeding. There was one “faithless elector” from CD 5, Ellison’s district. Because MN is a winner take all state according to the MN Constitution, he was dismissed after voting and replaced by the Alternate. So, Hillary got all 10 from MN. (Took the Sec. of State a few minutes to shuffle through papers to see exactly how to process the faithless elector’s vote)
Will try to send photos of the detailed ritual printed program and some pictures a little later. Meanwhile, I’m setting up to record news 5-6 on 11, 5, and 9. Don’t know if 4 was represented–perhaps they were too.
I’m glad I went too–got to keep the pressure on–never know in this extremely different and outrageous election. Thanks for covering the other event!
https://thoughtstowardsabetterworld.org/wp-content/uploads/2022/04/thoughts-300x138-1.jpg 0 0 dickbernard https://thoughtstowardsabetterworld.org/wp-content/uploads/2022/04/thoughts-300x138-1.jpg dickbernard2016-12-19 15:28:362016-12-19 15:28:36#1196 – Dick Bernard: Before the Electoral College in Minnesota
0 replies