POSTNOTE: An excellent commentary on July 4 and the Declaration of Independence, here.
On Saturday, when I was doing some political leafletting in my town, I came across a Dad and two young boys putting small American flags on the edge of their lawn. I rolled down the car window and said “great job!”, and one of the little kids said “thank you”.
It was no time or place to take a photograph. Sunday I drove back to the address and took the below photo. Just add in a Dad and his two little kids, and you can complete the picture.
(click to enlarge) 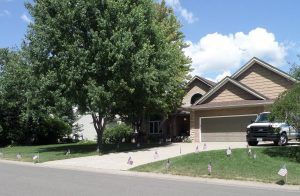 Back home, on a nice July 3, I went for my walk, and a couple met me and the guy said “thank you for your service”. For a moment I was taken aback, but then I remembered what I was wearing: my “Veterans for Kerry” t-shirt from the 2004 Presidential Election. Kerry was defeated that year; “Swiftboating” comes to mind; some will remember how successful it was to turn a positive into a negative: the demonizing of a hero. We were less than two years into the Iraq War, then.
Mr. Kerry is, now, our U.S. Secretary of State, and a very good one….
I thought of the recent political parade I was part of, for a local legislative candidate: a young Mom joined us for a short time, with her children and their friends, all carrying American flags, and they walked with us for awhile – they were, after all, little kids. Here is their photo. 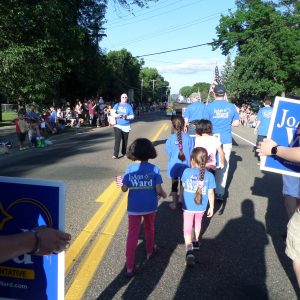 Oh yes, Mom was wearing her Hijab.
But my most vivid memory this 4th will be the one without a photo, from Thursday June 30, at Gandhi Mahal Restaurant in Minneapolis, where a roomful of people celebrated Iftar, breaking of fast during Ramadan. We overflowed the room, which must have meant there were over 100 in attendance.
We arrived at 8:45 p.m. and when we arrived, a young man was speaking to the assembled, most of whom were Moslem, about how difficult it is to be Gay and Moslem…. It was for him an act of courage, and all listened most respectfully, and gave him heartfelt applause at the end, and he mingled with the rest of us: a powerful coming out.
Whatever else we might do today – perhaps a parade in a neighboring town – these are the images I will carry with me on this July 4, 2016.
There will be lots of other images too. I notice that this mornings Just Above Sunset, “Our Fireworks”, is its usual interesting and thought-provoking self.
Have a great day, wherever you are.
AT THE PARADE IN AFTON: 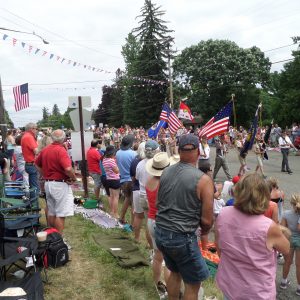 COMMENTS:
From Norm: (Norm, Julianne and I are long-time active members of a group called the DFL Senior Caucus): Thanks for a great review of what the 4th of July means to so many people including all of us!
Julianne and I were invited to attend a brunch a beautiful home along the St. Croix ten-miles or so north of Stillwater this morning hosted by one of the prominent “old guard” of the DFL. We were invited largely due to our work with several of the “old guard” if you will, who are working on developing a follow-on organization to replace the Hemenway Forum that ran for over 30-years under the guidance of former state party chair, George Farr.
In addition to its absolutely beautiful location on the banks of the St. Croix River, the home and yard were all decorated with 4th of July red, white and blue paraphernalia including many, many American flags hanging on the magnificent White Pines that surrounded the house and bordered the river!
It was a great way to spend part of the 4th of July visiting, socializing and “brunching” with so many DFLers of long-standing. Julianne and I were able to make several contacts as well for both the new DFL Forum as well as the Senior Caucus newsletter, including lining up a very prominent state senator to write the Capitol Corner update for the October issue.
In any event, just like you noted in your blog, we also noticed several homes along the way with flags planted along the edges of their lawns just like the one you took a photo of. In fact, there were dozens on them between Roseville and the town where our hosts lived.
In addition, when leaving the home of our hosts, we found cars parked on both sides of the highway for at least a mile south of the small town where they lived. The small town was filled with people getting ready to enjoy the annual parade that was to begin at noon!
So wonderfully Americana and the 4th of July!
From Bruce: Pretty rosy picture you paint, Dick. The fear of Trump fuels the tyranny that allows for decriminalization of criminals and legitimization of corruption as the grease that makes government run. Fear of Trump clouds these new normals & forces us to vote for lessor evilism. We, as a people, should have organized strong third parties years ago in order to have real and positive choice instead of of what we have now. We only have ourselves to blame. My self interest lies in not voting for either of the majors’ candidates. I think, as it stands now, the voter turnout will be low. Who that benefits is hard to tell. I’m petitioning to get Jill Stein of the Green Party ballot access in MN . Anecdotally, I’ve found the Democrats are the most likely to be against ballot access for Dr Stein because they think it works against Clinton. At the very basic level of our country’s voting system, they are practicing voter suppression. It gives them a sense of power. I’m sure if the accusations of voter suppression by the Clinton campaign in the primaries are true, these democrats wouldn’t care. It’s all in the name of the fear of Trump and everything else that is wrong with the world takes a back seat on the two party system bus.
Response from Dick: Thanks. I’ll add your comment, and mine, at the post. I am trying to give a realistic assessment, which is far from the idealism of something like the Green Party. We are not a Green Party country. I think many of our attitudes are turning in that direction, but not through organized parties. The parties are the ones which make the national policy, and regardless of your criticism of the Democrats, they are a far better alternative than today’s version of the Republicans, and the other parties are fringe, and that’s it. In fact, in my opinion, they mitigate against the very change which they seek, as they take votes away from the moderate middle. My favorite example is Ross Perot, who certainly was no Bill Clinton fan, but weakened George H.W. Bush…. Of course, I can’t prove that, but neither could you, about alternative parties….
And interesting commentary in yesterday’s Minneapolis Star Tribune by Lawrence Jacobs and Vin Weber about “Democracy (as only we know it)” adds to this conversation. You can read it here.
from Lauri: So when the birthday of our country falls in a weekend as beautiful as this, it would be a shame to let it pass by silently. A play in the park, dog sitting my adorable nephew Gio, bonfire and banana boats. A little playtime at Chutes and Ladders followed by a surprise journey to the World’s largest Candy store in Jordan. Ended with some tuna noodle casserole back at home and a trip with Heather to the cemetery to deliver some flowers for what would have been mom’s 74th birthday. We have much to be thankful for…. In good times and in bad. The men and women who bravely fought on behalf of all us, to give us freedom and guarantee us a country where we are free to make mistakes without fearing for our lives and to succeed because of our own determination. Regardless of all the craziness and pageantry of elections and political endeavors, may we all remember the gift our forefathers gave us so many years ago. God bless all of my friends out here and beyond and most importantly, God Bless America!
https://thoughtstowardsabetterworld.org/wp-content/uploads/2022/04/thoughts-300x138-1.jpg 0 0 dickbernard https://thoughtstowardsabetterworld.org/wp-content/uploads/2022/04/thoughts-300x138-1.jpg dickbernard2016-07-04 05:55:112016-07-04 05:55:11#1141 – Dick Bernard: The Fourth of July
0 replies