“Iraq” is one of those words-never-uttered-in-polite-conversation these days.  Even in the protest community, out-of-Afghanistan is more in as the issue du jour.
Iraq does come up, but only indirectly, and not by name: there is worry about our horrible national debt…but not much focus on where much of that national debt came from: almost a trillion dollars in off-the-budget money spent on our now eight year “War on a Word” (See #mce_temp_url#).   To focus on that would be bad form…we must look forward, one would protest.
Ho-hum or not, we went, last night, to hear Sami Rasouli and his son,Tariq, talk about Iraq.  Sami is well known in my area; I know Sami, though not well.  He’s Iraqi, left Najaf for the broader world back in 1976; ultimately settling in the U.S. in 1986.  He became a successful restaurateur here, an American in all the conventional ways.
2003 was the time of the shift in attitude for Sami.  He went back to Iraq for a family matter, intending to stay only a short time.  His visits lengthened; he sold his restaurant; he committed what life he has left to rehabilitation of Iraq and relationships between Iraqis and the U.S. which has essentially destroyed their country.  On his most recent trip, now ending, he brought 15 Iraqis to see in person his part of the U.S.  The city of Minneapolis has recently become a sister city of his hometown, Najaf.  He founded a group called the Muslim Peacemaker Team, modelled on and assisted by Christian Peacemaker Team.  His internet place is #mce_temp_url#.  Do visit. 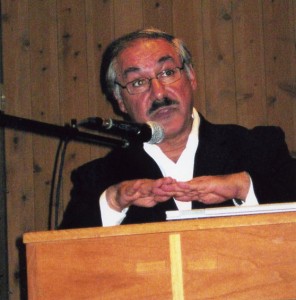 Last night, his 20 year old son, Tariq, spoke first.  Sami said, later, that he never thought that Tariq would even have an interest in going to Iraq, a country he had no direct relationship with – much like a person of German ancestry has no direct relationship with Germany.
Nonetheless, Tariq went to Iraq.  About the first thing he said was this: “Iraq is a third world country because of the U.S.”  It’s a rather jarring indictment, but true.   From an historical seat of civilization in the Middle East, Iraq has joined the Third World…and we did it to them, and would rather not notice….  Even during the worst times of Saddam, times were far better than now or the past several years of war.
Tariq showed a few minutes of video that he took in Iraq, the seeds of a documentary, then his Dad took the podium.  I’ve heard Sami speak before.  He spoke with conviction and passion.  He is well informed.
There have been immense casualties of war in Iraq; the 1991 Gulf War and the current nearly 8 year conflagration have essentially destroyed the country.  There is a website that attempts, diligently, to track the body count.  It is #mce_temp_url#.  It tracks only violent civilian deaths since 2003.  In all, since 1991, it is estimated that well over 1,000,000 Iraqis have died from the cumulative effects of the assorted wars and sanctions against Iraq by the U.S. and its supposed “coalition of the willing”.
But the disaster is much, much greater:  depleted uranium, from weapons of war, kills quietly and persistently and will continue to kill on into the far distant future, even if not used directly.  It is in the sandstorms, and in the water, and in the vegetables….
Potable water is in short supply, leading to epidemics of diseases like hepatitis, and premature death of children; electricity is scarce.  What was the middle class has largely left, and slow to return.
Sami talked about the three wars that have cemented Iraqi ideas about Americans like you and I.  I have mentioned two.  The first Iraqi image of America was, he said, “John Wayne movies”.  We are a society that celebrates and exports violent images.
He said something else well worth pondering: in his view, 5% of the population are inclined to peacemaking; 5% endorse the war philosophy; the other 90% tend to gravitate towards whoever has the power.  I believe he’s generally correct in his assessment.
The inclination is to follow the War crowd – the one’s who were in charge.  The consequence of our forever-wars is certain for humanity, and it is not for our good, whether we temporarily “win” or not.  We are paying the price now; we are only beginning to pay the total bill – that’s for our grandchildren (we seem to say).
It’s a tough struggle to commit to peace, but only we can do it….
For a rather stark comparison of what we spend on War as opposed to what this money could be used for, check out the downloadable postcards at #mce_temp_url# 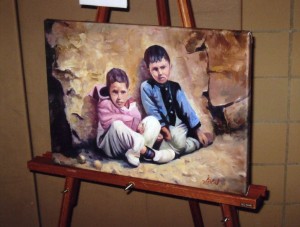