Much more information about the French in Minnesota available here and here.
What is your heritage? What is your story? Comment/Questions/Stories are welcome: dick_bernardATmsnDOTcom. (For many more stories, simply put the words Collette or Bernard in the search box of this blog.) 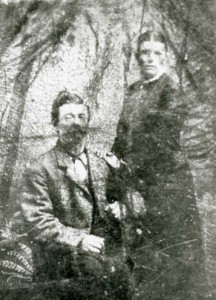 I’m in the midst of updating the index of a small French-Canadian newsletter, Chez Nous, which I edited for 16 years for midwest French-Canadians from the mid-1980s through 1990s.
And four of us from the French-American Heritage Foundation are at mid-point in a four week workshop presentation on our shared French-Canadian heritage.
So the visit of Canada Prime Minister Justin Trudeau and his spouse to the Obama’s in the White House this week is a good reminder of the very long connection between French-Canadians and the United States; and a good time for a brief “seminar” on a branch of the French-Canadian family tree very familiar to me: my own family.
It did surprise me to learn that the last such state visit between the two heads of state was about 20 years ago. After all, Canada, the French in Canada and the U.S.have a very long history in North America, going back to the founding of Quebec City in 1608. 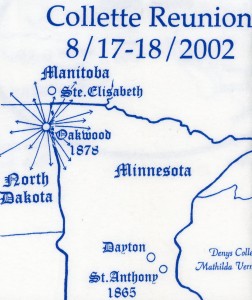 My Dad, Henry Bernard, was 100% French-Canadian, born in Grafton, North Dakota, Dec. 1907; graduating from high school there. His father was Honore (always known as Henry) Bernard, immigrant from Quebec ca 1894, carpenter, then flour mill chief engineer; his mother was Josephine Collette, born in 1881 at what was then called St. Andrews, Dakota Territory, where the Park enters the Red River of the North, baptized, and growing up on a farm, near tiny Oakwood.
They married at Oakwood ND’s Sacred Heart Parish in June, 1901. (You can access the Sacred Heart Parish Centennial book here. It is chock-full of French-Canadians. (See Part 2, page 27 upper left corner for “my” Collette’s). Oakwood is “suburban” Grafton – about four miles east.)
*
There is plenty of French-Canadian blood in the veins of Minnesotans and midwesterners. The 1980 U.S. census – the last to record such data – showed 7.9% of Minnesotans to have French descent (Wisconsin 7.3%, Michigan 10%).
At minimum, hundreds of thousands of Minnesotans carry some French or French-Canadian lineage.
French-Canadians were true non-native pioneers here, though often unrecognized. Ours seems always to have been a quiet heritage. Yes, there is a story about that, too…for another time. (In the Chez Nous index project I re-noted an article written by University of Minnesota professor William Rogers for an Adult Education journal in 1975. You can read it here: Fr. in MN 1975001)
*
Thirteen years ago, members of the Collette family staged a reunion at the historic French-Canadian parish of St. John the Baptist in Dayton MN, and event organizer Vernon Sell of the Minneapolis Collette’s designed the t-shirt pictured in part above.
Every family story is different. The Collette story in some ways is representative of the migration from Quebec to this area; and integration of the French-Canadians in this area.
Briefly: The first Collette came to St. Paul from St. Lambert QC in about 1857; my great-grandmother Clotilde Blondeau and her parents and siblings came to Dayton MN, probably from Ottawa Ont area, sometime shortly after 1850.
Most of the rest of the Collette’s, seven boys and one girl, came to then-St. Anthony, and settled near what is now the St. Anthony Main end of the Stone Arch bridge in Minneapolis about the time the Civil War ended. Octave Collette and Clotilde Blondeau (photo below) married at then-St. Anthony of Padua Parish in then-St. Anthony in 1869.
In 1875 the family moved to the Dayton-Otsego area, where they lived till about 1878, when the first of the group walked to the Red river Valley to take homesteads. Two other girls, by now married, had moved to the area of Oakwood from Quebec. About a dozen Collettes from Quebec had transplanted to Dakota Territory before North Dakota became a state (1889).
(click to enlarge photos) 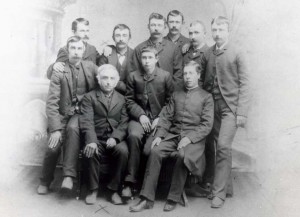 The Collette men in Oakwood ND 1887 likely after the death and burial of their wife and mother Mathilde. Dad is front left; the Priest is at front right. 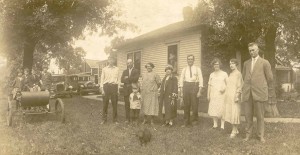 Visitors from Winnipeg to the Henry and Josephine Bernard home in Grafton in the 1920s. The 1901 Oldsmobile still exists, in a Pennsylvania museum.

1954 photo,Unlabelled photo summer lunch in the farmyard of the homeplace at Oakwood. Apparent identities as known. At right: Bonnie and Maurice Collette; from left Beatrice and Alcide Collette; at end of the table Josephine and Henry Bernard. The others are not known, and the photo is not labelled.

As happens in families, in time one of the boys, Vernon Sells Grandpa, married, and returned to the Dayton MN area to live the rest of his life with his family in what is now Otsego, between Dayton and the present day Albertville Outlet Mall.
One of the brothers, and two sons of another brother, in the early 1900s, headed north into southern Manitoba to take available land between Ste. Elisabeth and Morris MB.
Another brother moved back across the Red river to Argyle MN. Others moved to other places like the west coast.
So it happened over the years that this family, like so many others, blended into both the United States and Canada, all now speaking English, but the Canadian cousins likely speaking French as their first language at home.
*
Canadian Prime Minister Trudeau comes from the French-Canadian tradition, as does his first lady.
Yes, I’m very proud of this heritage.
What are your stories? Check in with us at FAHFminn.org, consider joining our mission to preserve the French in Middle West heritage. Write me at dick_bernardATmsnDOTcom.
https://thoughtstowardsabetterworld.org/wp-content/uploads/2022/04/thoughts-300x138-1.jpg 0 0 dickbernard https://thoughtstowardsabetterworld.org/wp-content/uploads/2022/04/thoughts-300x138-1.jpg dickbernard2016-03-12 07:13:102016-03-12 07:13:10#1114 – Dick Bernard: Bienvenue Canada, the Trudeaus & French-Canadians