Friday evening, October 2, the French-American Heritage Foundation (FAHF) hosts a special event focusing on genealogy in Maple Grove MN. All details are here. Time is short, so check this now, if interested*.
The event venue is in the heart of what used to be one of the French-Canadian rural settlement centers in what is now the Twin Cities metropolitan area. Note photo below (which is also in pdf form, here: Dayton MN 1873001)
(click to enlarge photo) 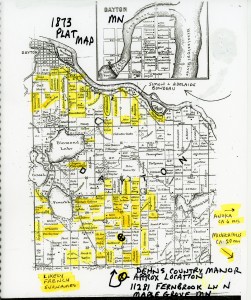 The French-Canadian presence in Dayton MN 1873

This map, though unpolished, gives an interesting look at a “nest” of L’Heritage Tranquille, the French-Canadian presence in a single township in the Twin Cities area. Otsego, to the immediate west (between Rogers and Elk River), also had significant French-Canadian presence; as did Osseo to the east, and Corcoran township to the south, and many other places (Little Canada, Centerville & Hugo, pre-Minneapolis St. Anthony et al).
(On the map, Simon and Adelaide Blondeau are my great-grandparents, who came to Dayton from Canada in the early 1850s.)
A mysterious and intriguing presence, by virtue of ownership of a piece of land just west of present day Dehn’s, is Thomas L. Grace, who happens to have been the second Bishop of what is now the Archdiocese of St. Paul-Minneapolis. (Scroll down to the para beginnng “After the death of Bishop Cretin…”) The story of that piece of land is one yet to be told….)
As late as the 1980 census – the last to ask the question – nearly 8% of Minnesotans recognized their French ancestry. Fr-Can in U.S. 1980001 Of course, this ancestry carries on, though the French surnames are less often recognizable as identifying people of French ancestry, masquerading their heritage (two French words, by the way) behind surnames of other ethnic groups, or, common back in 1873, behind French names that were anglicized: “Roy” became “King”, and infinite other examples.
But, back to Friday, October 2. Check us out. Stop by. Let others know.
*
About the sponsoring group, French-American Heritage Foundation (FAHF):

FAHF (full disclosure: I am current vice-president) is the latest in a line of groups seeking to preserve the French heritage in the midwest.
In the twin cities, in recent history, FAHF was immediately preceded by La Societe Canadienne-Francaise du Minnesota (LSCF) which existed from 1979-2002, and whose founder was legendary Franco American John Rivard, native of the Range-Somerset WI area also well known as the popular Father John of St Anne’s in Somerset. . LSCF lives on at the FAHF website in Chez Nous, its “kitchen table” produced newsletter, all of whose near 1000 pages, indexed, can be found under the tab “library”.
(Mr. Rivard retired before the internet age, thus no URL links were found about him for this article; though much can be read by him within Chez Nous. He died in 2005 at age 94.) Below is the jacket of the video produced for his memorial service in 2005. 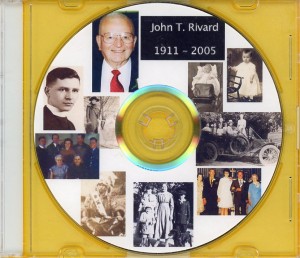 September 28-30, 2012, another well known and passionate Minnesota French-Canadian, Dr. Virgil Benoit of Red Lake Falls MN envisioned and put together an event, Franco-Fete, in Minneapolis. This event followed several predecessor events at Grand Forks, Turtle Mountain (Belcourt) ND, Bismarck and Fargo, ND.
The 2012 event was very successful, but not without considerable stress. Three days prior to Franco-Fete, Dr. Benoit was in a serious car accident, and spent Franco-Fete and many days after in a hospital in Grand Forks. A dozen or so of us who had volunteered to help, were thrust into completely unanticipated leadership roles.
After Franco-Fete, in November, 2012, a core group in the Twin Cities met to debrief Franco-Fete, and an outgrowth of that meeting came FAHF, which has formal 501(c)3 standing, and is now completing its third year of existence.
We have weathered the birthpangs of any new organization, and look forward to a long future.
We invite you to join us as we continue the task of helping to preserve the French in America presence in Minnesota and surrounding areas. Membership information here.
* – Questions? Call Dick Bernard at 651 334 5744
https://thoughtstowardsabetterworld.org/wp-content/uploads/2022/04/thoughts-300x138-1.jpg 0 0 dickbernard https://thoughtstowardsabetterworld.org/wp-content/uploads/2022/04/thoughts-300x138-1.jpg dickbernard2015-09-28 10:45:372015-09-28 10:45:37#1067 – Dick Bernard: French-Canadian Special Event on Genealogy, Minneapolis-St. Paul area, Oct 2, 2015
0 replies