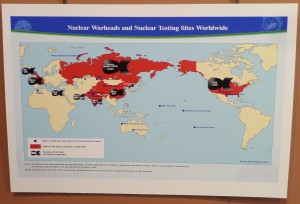 Seventy years ago today, September 11, 1945, my mother’s brother – my Uncle and Navy Lieutenant George Busch – was on board the Destroyer, the USS Woodworth, which had anchored the day before in Tokyo Bay. (WWII was over, the surrender signed nearby on September 2, 1945.)
I know this from the ship daily log books which I had requested back in the 1990s. Uncle George was on the Woodworth, from January, 1943, through the end of the war, till docking in Portland Oregon October 20, 1945, thence reentering into American civilian peace-time society.
Presumably on September 11, 1945, those on the Woodworth had an opportunity to take a look at what was left of Tokyo. 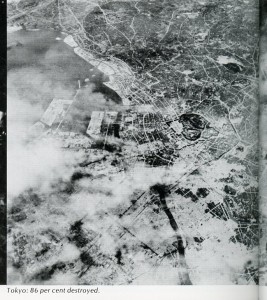 Perhaps some of them – perhaps my Uncle George? – did as my Dad’s cousin and best man, Marvin, an Army veteran, who was field promoted to Colonel by the end of the war, and was for a short time head of a Prefecture on Japan. He told me once that his first act on reaching Japanese soil was to “piss on it”. So it is with showing dominance over enemies after conquest, and disrespecting the vanquished, even though his Prefecture was far from the seat of things militarily – it was just a rural area in northern Japan.
The war in the Pacific had been a vicious one for all, and in addition, Marvin’s cousin, my Dad’s brother Frank, had gone down with the Arizona at Pearl Harbor, December 7, 1941. 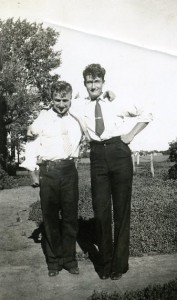 There have been lots of September 11ths before and since 1945.
September 11, 2015, in addition to the obligatory nod to THE 9-11, will probably feature, on TV tonight, the endless commercials attacking one of our MN Congressmen who apparently is not condemning the Nuclear Agreement with Iran and is viewed as politically vulnerable. One ad ends with a horrific fireball, a “mushroom cloud”, as if it is some unique invention to be pioneered by the Iranians if we don’t see to it that they’re kept under our heel. Such propaganda is expensive and persuasive. We have become slaves to sophisticated media messages which are difficult to escape.
But there are alternative realities as well. Tomorrow somewhere in the Twin Cities a large number of new citizens will proudly take the oath, and graduate to full citizenship in the United States. It is doubtless a ritual shared in all countries, all that differs is the precise way it is done.
And these new citizens will be proud of their new citizenship, as they’re proud of their own homeland, and are likely more aware than the vast majority of us about what it means to be an “American”. They’ve had to study our system, and they are knowledgeable. Sorry, more of us aren’t as aware….
We all will do as we will do today, and tomorrow and next week and on and on and on.
Three simple suggestions:
1. To become acquainted with the organization Green Card Voices, which is doing very significant work to bring to life those who have spent years as Green Card holders in the U.S. enroute to citizenship.
2. If you’re in the Twin Cities, take time to go to the Landmark Center in St. Paul, and see the exhibit provided by the City of Nagasaki about the bomb and its affect August 9, 1945. It is a relatively small exhibit, but if you pay attention to it, you’ll easily be there more than an hour. It’s on till November 28. The schedule is here:
(click to enlarge) 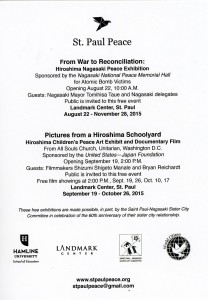 3. To pick up and reread, or read for the first time, George Orwell’s “1984”, published in 1949, which I probably didn’t see till college days. It is rather disquieting to translate his novel to present day American terms: actors like “telescreen”, “Proles”, and all of that. (I looked up September 11, 1984, and there really wasn’t all that much happening that particular day. But Orwell was in many ways a visionary, and most of us are todays Proles, who allow life happen to us without much regard to the consequences.)
Each one of us has a certain command of our own “ship”, and we can impact positively or negatively on how it sails, and how it impacts ourselves, and others.
Have a great day. 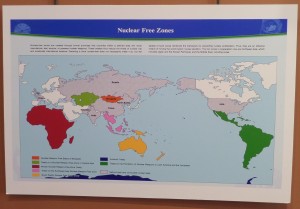 POSTNOTE: After publishing the above I watched the 9-11-2015 evening news which, as expected, emphasized again, on this 14th anniversary of 9-11, the continuing national mourning of what seems to be our now perpetual “Pearl Harbor”.
No “mushroom cloud” ads appeared, as erroneously predicted by myself, perhaps because a concerted effort to stop the deal failed in the U.S. Congress on Sep. 11 – a date probably specifically strategically selected for the vote.
No doubt, we experienced a tragedy 9-11-01, but the biggest tragedy of all is our continual obsession of the need to be in control; and the seeming narrative that the only way to prevent war is to be stronger and more threatening than the other party in preparing for the next war…more or less the narrative of George Orwell’s 1984. We seem to need to have an enemy to validate our existence. We are made to live in constant fear of some other.
9-11-01 took the lives of 3 Minnesotans, it was reported tonight. In the 2000 census there were 4.9 million Minnesotans. (There were 281 million Americans in 2000.) After 9-11 has come continuous war, Iraq, Afghanistan, ISIS/Syria, with all the attendant loss of life and disruption of normal lives, including the present day refugee crisis. ISIS/ISIL is a direct outgrowth of our actions in Iraq, including regime change.
We don’t seem to learn, we need to change the conversation, beginning within ourselves.
I wonder if we have the capacity to do this….
https://thoughtstowardsabetterworld.org/wp-content/uploads/2022/04/thoughts-300x138-1.jpg 0 0 dickbernard https://thoughtstowardsabetterworld.org/wp-content/uploads/2022/04/thoughts-300x138-1.jpg dickbernard2015-09-11 16:15:582015-09-11 16:15:58#1061 – Dick Bernard: September 11
0 replies