POSTNOTE, AUGUST 28: Here is the video of the entire two-hour program on the Iran Nuclear Agreement, on which I comment, below.
A few hours before attending a two hour “Round Table” on the Iran Nuclear Agreement Monday night, I was talking with a friend, who at the same time, was monitoring tweets from another friend at some political conference somewhere. A prominent Minnesota legislator was speaking at the time, and he commented, according to the tweet, that “in my district, the only acceptable vote [on any legislation] is NO”.
He would have been talking, of course, about his “base”, the majority of voters who elected him to the legislature from their district. They obviously aren’t into the give and take of what I consider healthy politics: healthy debate accompanied by compromise to reach an always imperfect resolution. Rather their idea seem “my way or the highway”. You win or you lose, and all that matters is winning…. A certain recipe for conflict where, ultimately, everyone loses.
A few hours after the Round Table, on Tuesday morning, I noted at the top of page A4 of the Minneapolis Star Tribune the below photo, which was surrounded by a long article, “Talks yield deal to ease Korean Tensions”.
(click to enlarge) 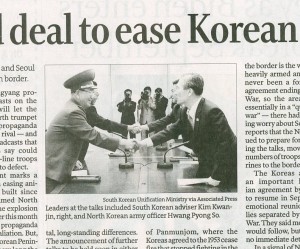 Clearly these representatives of enemies of over 60 years were negotiating to resolve an issue; face-to-face with a handshake to seal a doubtless imperfect deal to both sides.
The image particularly struck me because a dozen hours earlier I watched and listened to another group of four men, talking pro and con about the Iran Nuclear Agreement before a couple of hundred of us at the Cowles Auditorium at the Humphrey School of Public Affairs at the University of Minnesota. The below photo is representative of many that I snapped of the group. 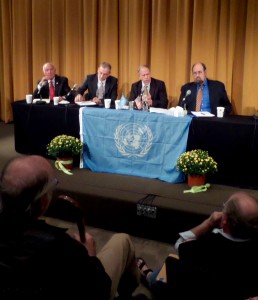 Each photo would have seen the four characters in a somewhat different light. Photos are simply “freeze frames”, in these digital days easily manipulated to convey the desired “spin”.
The content of the Monday gathering was no particular surprise: polar opposites invited to express their positions. A good summary was provided by Eric Black who covered the session.
William Beeman and Oren Gross apparently were the main spokespeople for the pro and con side: both were well informed and convincing; the room was probably filled with partisans, one way or the other who didn’t need convincing. Everything was very civil, but there was no bargaining, not so much as “you have a good point”….
While the Monday session was strictly a talking at, rather than talking with, exercise, it was a very worthwhile use of my time, I felt. At two hours, it is too long for airing on on-line media, which is a shame. It was very interesting to hear these four panelists talk about an extraordinarily complex topic – the multilateral Nuclear deal with Iran – to an audience which was, likely, split in its opinions about whether the deal was “good” or “bad”.
We all had an informal ballot we could fill out, assessing whether the two hours changed our individual minds on whether the deal was good or not. I answered “no”. My guess is that my answer was by far the most common vote.
We were not there to negotiate; rather to listen and learn a bit more.
Of course, this was intended, but it is also very representative of an unfortunate reality in our nation today. We are a nation filled with sound bite certainties. We make judgments based on our own fragments of information about all manner of simple and complex issues.
I happen to be in Beeman’s corner on the Nuclear deal issue (Beeman, Iran Nuclear001), but always willing to listen to other points of view.
As for “getting to yes”, those four folks (photo above) from “axis of evil” North Korea; and shining star of capitalism South Korea best represent the harsh reality of actually doing a deal, where the status quo, even on relatively simple issues from a global perspective, is difficult.
The actual negotiations for the Iran Agreement of course is infinitely more complex, but the very engagement of our countries participation and leadership in the process is worthy of congratulations to all negotiating parties.
Negotiations is part of everyones life. Why should negotiating international differences be any different?
POSTNOTE: RELATED, Note the October 9-10, 2015 Workable World Conference on Transforming the United Nations System. Details here.
Here is a link to a year-long series of posts related to international issues on this, the 70th year of the United Nations.
https://thoughtstowardsabetterworld.org/wp-content/uploads/2022/04/thoughts-300x138-1.jpg 0 0 dickbernard https://thoughtstowardsabetterworld.org/wp-content/uploads/2022/04/thoughts-300x138-1.jpg dickbernard2015-08-27 21:50:242015-08-27 21:50:24#1055 – Dick Bernard: Dealing with Differences. The Iran Nuclear Agreement, the Koreas, North and South, et al
0 replies