POSTNOTE, July 18: see “The Women in the Yard. Looking for Clara”, here.
Going through old papers and photos of a deceased relative can be tedious, but occasionally something pops up, as did this photo a few days ago.
(click to enlarge) 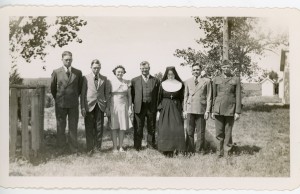 While not of my town, or my family tree either, I have some knowledge of this farm family in the summer of 1943. Sr. Victorine, of the Sisters of St. Joseph of Carondolet in St. Paul, was a good friend in her last years. She passed on in October, 2010.
I never knew that her brother was Francis, at right in this family photo taken in the summer, 1943, in rural ND. (The entire family is in the photo, save their mother, Clara, who was probably taking the picture. On the back of the picture are written the names of the Charles Long family. From left, as identified by a family member, they are: Leonard, Clem, Marcella, Charles, Sr. Victorine, John and Francis Long.)
The 1976 town history (Berlin ND) says that Francis was “Killed in Saipan, July 2, 1944“. A short article from, likely, the Fargo Forum, says that Francis dropped out of high school to go in the service. In the Berlin history, he is listed as “deceased” in the class of 1943.
A letter from my Grandma Rosa to her son, my uncle Lt. George W. Busch, officer on the USS Woodworth in the Pacific, dated August 20, 1944, sums it all up well: “[W]e had a Memorial Mass for Francis Long killed July 2 on Saipan in action Sister Victorine was here to come to visit us on Fri afternoon is done with school now has one test to take then she has her Masters Degree in Science she did very well looks so good too but all felt so badly….”
So goes war, willing heroes, full of all of the brash confidence and invulnerability of youth. Francis was probably 19, just starting life, when he died.
I think of Francis and family this day because this week a major agreement was reached between U.S. and Iran negotiators.
The media is full of commentary about this agreement, and people who stop by this blog can find far more than adequate information in other sources, on all sides about the technical details, and dead-certain positions and opinions about it.
President Obama framed this pretty well, yesterday: “Either the issue of Iran obtaining a nuclear weapon is resolved diplomatically through a negotiation or it’s resolved through force through war.”
Either we figure out how to get along, or there will be more and more people with names who perish, and not only ours.
This won’t stop the drumbeaters for War, for unconditional surrender of the Enemy, whoever that happens to be at the time.
Peace is a very hard sell in this country.
Peace is, I think I can fairly say, considered by the traditional Power People in our country to be an instrument of terrorism…It threatens their prosperity or their authority.
For the media (and the people who watch or read it) Peace is boring as a generator of revenue (just watch your local and national news and see what is prioritized for coverage.)
Peace is costly – a competitor – for the military-industrial complex that President Eisenhower so correctly identified as a big and looming problem way back in 1961.
For others, an enemy is absolutely essential to retain power and control. It is useful to keep people in fear, and portray yourself as the only safety buffer between “us and them”.
Eisenhower was as military as they come…he knew, however, a reality to which we’ve paid too little attention.
My friend, Tom White, who spent a great deal of time for many years establishing accurate numbers concerning military and other costs in this country always estimated that over half of the U.S. discretionary budget related to military.
He’s out of the card business now, but the general information on his last one is still pretty accurate.
All that military money goes somewhere, and the vast majority not for the peace and general welfare of our or other citizens.
We live or we die by our priorities.
Francis and millions of others have died defending the premise that war is necessary for peace.
*
A postnote from the present:
I’ve been a member of the American Legion for years. I’m a vet. The Minnesota American Legion seems to enroll perhaps 1 1/2% of Minnesota’s population. It is a small, and decreasing in membership (old soldiers do die), but still a powerful entity.
In the most recent American Legion newspaper, announcement was made of the 2015 Minnesota American Legion Convention, including the Resolutions it would be considering, among which was this one.
(click to enlarge) 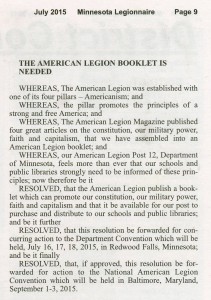 Are our (America’s) priorities:
“Constitution
Military Power
Faith
and
Capitalism”
as stated in the Resolution?
The drafter of the resolution seems to think so, and I can predict that this resolution will sail through. Look carefully at the four pillars of the resolution.
If we choose survival, we choose peace: that is my opinion.
And I thank the administration of President Obama for forcing us to begin this conversation, since an alternative to his forced choice is a third way, which he did not mention: to stay the course of our dismal reality of fear of anything and everything but war.
https://thoughtstowardsabetterworld.org/wp-content/uploads/2022/04/thoughts-300x138-1.jpg 0 0 dickbernard https://thoughtstowardsabetterworld.org/wp-content/uploads/2022/04/thoughts-300x138-1.jpg dickbernard2015-07-16 09:52:402015-07-16 09:52:40#1043 – Dick Bernard: Going to Peace. A Reflection on Detente with Iran.
0 replies