Today was the annual Recognition Dinner of Anoka-Hennepin Education Minnesota, and as I’ve done since the first one, in 2001, I always attend. And when I get home, I’m always glad I made the trip to the north suburbs of Minneapolis, to some venue in the Anoka-Hennepin School District.
It was a rainy late afternoon, early evening, this year, and a rush hour drive, but as always the general theme of food, fun, family prevailed, the family being 85 or so present and past leaders of the now over 2700 member teacher union.
This year I was especially glad to be there, though externally I probably looked and sounded a bit withdrawn.
It was an evening of reminiscence…a time of thinking back.
It was 50 years ago this coming summer, July 21, 1965, when I came to Anoka for the first time, and signed a contract to teach in the brand new Roosevelt Junior High School in the neighboring town of Blaine. I signed the contract in Superintendent Erling Johnson’s office in the old Anoka Senior High School, the school from which Garrison Keillor had graduated a few years earlier, in 1960.
I didn’t know it then, but three days later my critically ill wife, Barbara, would die at the University of Minnesota Hospital, leaving me in a strange city, a new arrival, with a year and a half son. Survival depended on community, in the broadest definition….
(click to enlarge all photos) 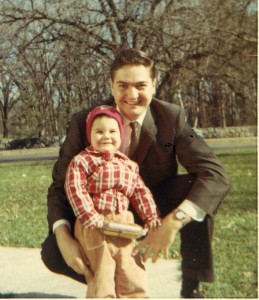 The early weeks remain a blur, and the first year was especially difficult, but somehow or other unplanned things tend to work out, and in this case they did.
Another unplanned event got me involved in the teacher’s union beginning towards the end of the 1960s.
I was teaching at Roosevelt, and a teacher colleague, Ron Swanson, became President of what was then called AHEA, the Anoka-Hennepin Education Association. Anoka-Hennepin was already a large district, and while there was not yet collective bargaining, representing about 1000 teachers was very hard work.
Ron was a local boy, and I was an outsider, but one day I remember Ron walking by with a large box of Association files, heading to a meeting, and complaining of a bad headache.
It was then and there that I decided that I needed to get involved and do something, though I had no idea what teachers unions did. That singular decision led to a 27 year career representing public school teachers – something I’d never even considered doing. So is how life goes. 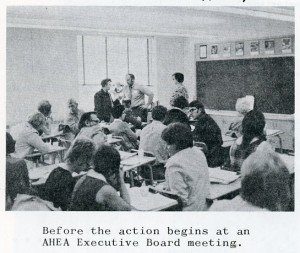 AHEA Executive Board Meeting in October 1971

You learn quickly, of course, when you jump in, and others who are active see that you have an interest.
For me, it began with becoming part of a Public Relations Committee which founded something we decided to call “Coins for the Community”. Tonight, at the dinner, it was mentioned that Coins for Community remains as a project of the Association 45 years later!
Old AHEA Newsletters I have reveal the origin and first results of “Coins for Community”: AHEA Coins for Community001. I can still see in minds eye the small committee meeting in an Anoka-Hennepin classroom deciding on the project. A teacher at Sorteberg Elementary School asked her son to design the Coins logo which was used for years.
Then came a year of editing the Teacher Association newsletter, thence dabbling in negotiations, thence diving into the totally uncharted waters of Executive Director of the local Union beginning in March, 1972. 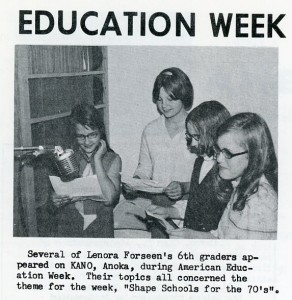 American Education Week 1970. These youngsters would now be in their late 50s! 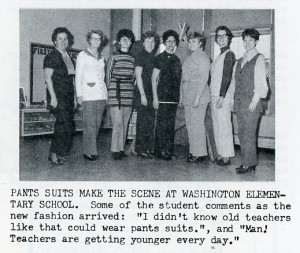 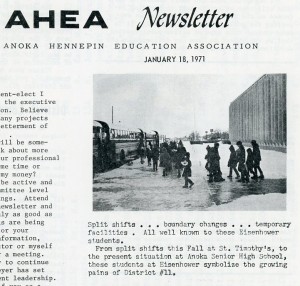 Growing Pains January 1971, at what was soon to become Anoka Senior High School

There were increasing numbers of we teachers who became active back then and, truth be told, we all basically slogged along, putting one foot in front of the other, learning as we went along. So did management adapt and adjust. They had no concept of sharing power with employees – it just was something that had never been done.
We all learned, making abundant mistakes in the process.
What heartened me tonight is that this Association survived and thrived long after we departed from the scene.
Sitting in that room tonight, among a number of we “old-timers” were a large crop of present day active members of the Association, the people who make any organization work: in a real sense, a family of people who work together towards a common cause, not always agreeing on what or how to do this or that, but nonetheless getting the job done…and being respected by the other side.
Sometime in the next months there will be a 50-year anniversary of the opening of Roosevelt Junior High School. When it happens, I’ll be there with the rest of us, all well on in years, now, but nonetheless all people who contributed in our own ways to the future.
Thanks AHEM Local 7007. It was great to be there. 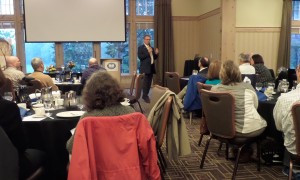 LeMoyne Corgard, President of AHEM, presides over the recognition of teacher leaders May 14, 2015