On my frequent trips to LaMoure ND, I’ve always passed by a road-side historical marker on the edge of Milnor (about 40 miles west of Wahpeton on Highway 13).
Markers like these are “magnets” for me, but this one I would always pass by – enroute, and too tired – though I think I read it back in the late 1980s, before it had any context for me.
Here’s a photo of the marker, weather beaten but readable. Click to enlarge it. 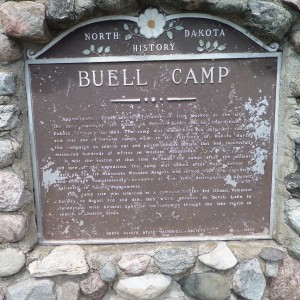 This marker had, it turns out, personal meaning to me: back in 1863 my ancestor, Samuel Collette, was a private in the very unit that camped here, part of Co G of the First Minnesota Mounted Rangers, on their mission to remove the Indians from territory about to be settled, part of the Indian War (now called Dakota Conflict) of 1862-63.
There is no need, here, to either justify or condemn that long ago action. It could be argued either way, and has been, and likely will be. It was a part of history.
The marker itself is now over 50 years old, and it would be interesting to discuss how its contents might be changed, if at all, at this time in history.
Five years ago as part of my French-Canadian family history I included a few pages about this campaign. A portion of those pages can be read here: Sibley Expedition 1863*001
The North Dakota Historical Society has an interesting weblink which describes, briefly, the circumstances and experiences at each of the camps on the Sibley Expedition. You can read it here. Simply use the drop-down menu on the page to find any of the camps, including Camp Buell.
No photos exist of Samuel Collette. Apparently they were all lost in a house fire somewhere years ago. He was an interesting character, coming from Quebec to what is now Centerville in suburban St. Paul in 1857.
In 1862, for reasons unknown, he became part of the First Minnesota Mounted Rangers, thus becoming part of the historical narrative of this part of the midwest.
* – Pages three and four of this link are from a newsletter, Chez Nous, which endeavored to keep alive aspects of French-Canadian history in the midwest. The entirety of Chez Nous can now be read on-line, and is indexed. Go here, click on Library, click on Chez Nous to access both index and newsletter entries.
https://thoughtstowardsabetterworld.org/wp-content/uploads/2022/04/thoughts-300x138-1.jpg 0 0 dickbernard https://thoughtstowardsabetterworld.org/wp-content/uploads/2022/04/thoughts-300x138-1.jpg dickbernard2015-05-10 15:13:592015-05-10 15:13:59#1025 – Dick Bernard: Camp Buell, Dakota Territory, July, 1863
0 replies