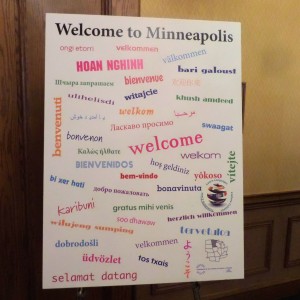 Since the time I met him a dozen years ago, my friend, Dr. Joe Schwartzberg, always worked into his programs his Affirmation of Human Oneness, which he first wrote in 1976. As I got to know him, I came to learn that he’d been working to have the Affirmation, in English, translated into as many major world languages as possible.
He’s now at 41 languages.
In 2010 Dr. Schwartzberg gave me the translations and allowed me to prepare a small imperfect book of them and publish them on the internet in time for the 2010 Nobel Peace Prize Forum at Augsburg College in Minneapolis. You can find the resulting booklet here.
One language in the booklet especially intrigued me as I had never heard of it. It is Esperanto*, and you can find it in the above booklet in its alphabetical place, following English, and preceding Farsi (Persian).
To me, at the time, Esperanto appeared to be something like Spanish.
Life moved on, until March 12, 2015, when I was invited to attend a small dinner with Prof. Ron Glossop, in Minneapolis for an event. I’d met Prof. Glossop in another context, and hardly knew him, and in the course of conversation, asked him why he was in town.
Prof. Glossop was presenting a workshop on Esperanto the next day at the Central States Conference on the Teaching of Foreign Language (CSCTFL). An activist for world citizenship, Prof. Glossop said he learned Esperanto because he wanted to be a world citizen, and now largely because of Esperanto and getting to know Esperantists throughout the world, he felt like a world citizen.
I asked, would he mind if I “crashed the party” the next day, and attend his session. Come on over, he replied.
So I went, and it was a fascinating hour and the language made sense to me.
I have no gift in languages, so simplest to just introduce Dr. Glossop by photo, and include (with his permission) his handouts on Esperanto001, and include the official website of Esperanto-USA, and an 8 minute and fascinating recommended video describing Esperanto, in English, including some verbal Esperanto.
Dr. Glossop’s contact information can be found at the first page of the handout, should you have questions or an interest. 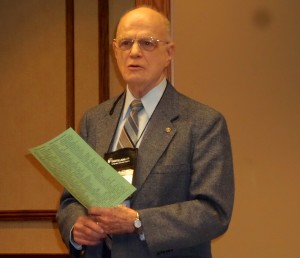 * – Prof. Glossop told me he was the one who authored the translation which appears in the booklet.