The Selma, Alabama, march was actually two marches. The first, March 7, 1965, was the confrontation at the Edmund Pettus Bridge in Selma; the second began March 21, 1965, and ended four days later at the capitol in Montgomery.
My friend, Kathy McKay, decided to go to Selma March 6-7 to remember 50 years ago. Following are her notes as she experienced Selma, and Alabama, in 2015.
Kathy McKay
Why go to Selma?
When I read a short note in January that President Obama was scheduled to go to Selma for the fiftieth anniversary march I knew I wanted to go too.
I remember the first marches in Selma with the really frightening pictures. Selma has become an iconic event of many occurring during the intensity of the Civil Rights movement in the 60’s and 70’s. It seemed like a way to remember these efforts, to underline their importance, and to participate in a public display of democracy given the challenges to civil rights still so with us. As Obama said in his speech at the foot of the bridge the US is still a work in progress. Democracy is still perhaps more of an ideal than a reality.
Another reason I wanted to go is that Lee and I own property in Alabama. Though I wholeheartedly embrace the unspeakable beauty of the island coast with its birds and quiet beaches I had not yet found a way to feel as though I politically belonged. I winched at statistics of poverty rates, anti immigration sentiment, disproportionate rates of incarceration and a general suspicion of pick up trucks with gun racks.
Perhaps traveling to Selma would expand my orientation to Alabama…give me a better feel…help me see if there is a way I can “fit” better into an Alabaman identity.
Montgomery, March 6th, night before Selma
Here I am at a Waffle House in a town I have never been to before. Montgomery, the capital city of Alabama is about 50 miles east of Selma and the closest place that I could find a room three weeks ago when I started calling.
This week end Montgomery has the Patti LaBelle celebration concert and the Grammy nominated Imani Winds doing a world premiere of a piece memorializing both Langston Hughes and negro spirituals in a nod to the 50th anniversary.
Montgomery has the Southern Poverty Law Center which was started by Morris Dees during the 60’s and is premiering a film highlighting several of the original local marchers.
There is a lot going on in central Alabama celebrating this civil rights event.
*****
In March of 1965 I was living in a college dormitory of 600 women in Winona, Mn. Not only was there no internet but only one television in the whole building. We got our news and commentary from TIME and Newsweek sometime after the events happened.
I was stunned when I viewed the news reports and video on that TV of policeman attacking the citizens they were hired to protect, and the now infamous footage of rage and brutality against the non violent marchers. It is the deep disrespect and de-humanization this event represents that draws me Montgomery
*****
President Obama was scheduled to speak at 1:30 in the afternoon on Saturday, March 7. I was 48 miles away in Montgomery. The news was saying security checks for the up close area would begin at 8:30 in the morning. I made a decision that I did not want to wait in an enclosed area with no water or seats for 5 hours so didn’t try for that deadline.
Wonderfully the Museum of Alabama opened at 8:30 on Saturday morning and had an exhibit of some of the Spider Martin black and white photographs from the first March. I headed to downtown Montgomery and entered the atrium of the museum a few minutes after 8:30am. Walking past busts of Alabama heroes I saw a military general that fought against the Spanish and one from the revolutionary war. I saw a proud bust of Booker T. Washington and one of George Washington Carver There may have been the expected Confederate generals but I did not see them. 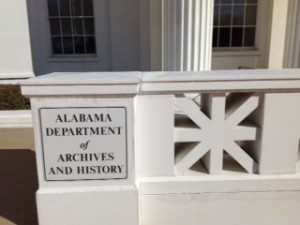 The Spider Martin exhibit was on the first floor. A friendly docent welcomed me and directed me to the Milo Howard room where the large copies of pictures were hung.
Following this visit I headed for the highway to Selma figuring I would get there early and look around. Spring begins in late February in Alabama. The rolling hills had some green and the four lane highway with a broad grassy median was a pleasant drive.
As I reached the peak of one of the many undulating hills I noticed in my rear view mirror flashing blue lights. “Oh oh someone is getting a ticket” I thought. The blue lights persisted and then I notice motorcycle police leading a trail of vehicles. “Oh, a funeral procession.”I slowed slightly. As there were two lanes going in my direction no need to pull over.
Pulling up beside me going, perhaps 55 mph or maybe 60 mph, were eight large motorcycles with leathered drivers and blue lights flashing. Immediately behind them a long black limousine, and then one after another of black SUV’s with license plates 001, 003, etc. As I was counting the SUV’s and got to about seven or eight i was stunned to realize this is the president and his entourage…family, secret service, etc. I was overwhelmed with the impact of driving along side of the president to get to the Edmund Pettus bridge and the city of Selma. The symbolism of a black president coming to the sacred ground of Selma to honor the marchers, the people of Selma and to proclaim to America and the world “what happened here was so important”. I was in tears.
Later came a train of seven tour buses, the congressional delegates, with staff, I believe. About 12 miles from Selma the traffic slowed and for the next three hours we crawled toward the truck route into Selma. The main highway goes across the bridge onto Broad street, the main street in Selma.
The president’s entourage went into town over the bridge, the rest of us through the back door truck route. Along the highway at the equivalent of about every three blocks were municipal police or sheriffs or state police guiding traffic and answering questions. We were all patient. Some stopped at empty lots a mile or so out and walked in to the town. South High school, about a mile and a half out of town was charging a modest fee to park in their lot, a fund raiser. I stayed on the road and went into the heart of Selma arriving about 12:30. Magically I found the last perking space on Clark street in the residential area. I hopped out and headed for the center of town. Needless to say I had missed the opportunity to get up close to the bridge in the secured area. The town was packed with people, tour buses from Atlanta, New Orleans, South Carolina and places unnamed and thousands of pedestrians.
Broad street was solid people so I made my way up the next street over. I could get within a block of the river and there met barriers and secret service. This would be my place for the next couple of hours. Although the sound system was loud enough to reach our area the “noise” was not decipherable. We didn’t care. The music still worked. The cadence of John Lewis was unmistakeable and the instructive and insistent President Obama spoke clearly without the specific words. (we all said we’d catch the actual speech later on tv). 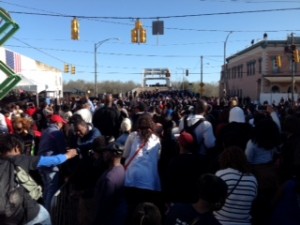 The crowds included lots of children, young people and old people. People dressed up and those more casual. No one seemed in a hurry to get anyplace. Everyone seemed happy just to be there…that was the point, to be there. The weather was friendly, bright sun and about 70 degrees.
After the speeches music played over the several blocks of milling people. There were booths selling food, I bought a roasted corn and then barbecued ribs from these ladies who were running a busy booth but consented to have their picture taken. 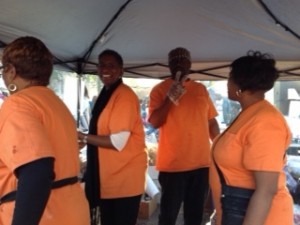 Chicken, grits and desserts were available. I bought a memory water bottle with Selma-50 Years written on the side. No one wanted to leave. People sat on the steps of all the churches, in the yards of the schools…everywhere they stayed around.
I, too, milled around feeling totally comfortable, not wanting to leave. I listened to an older gentleman singing tunes he was making up with recorded music background. I wandered back and forth down various streets, had a sweet tea and noticed the overflowing trash bins from all of the food that was being consumed.
As the sun’s light began to change I went looking for my car. Luckily I had written down the intersection and had my GPS with me. I walked by dozens of tour buses waiting for their travelers and got in line again to retrace my route out of town. The line was not as long leaving as it had been coming into Selma.
I left feeling proud, fulfilled, very American…we do create change, we have more to do, there are people willing to put their lives on the line to move the needle in the direction of justice, of fairness.
Alabama is different for me now. The people gathered at Selma both local and visitors enveloped me with assurance that there is room for me in Alabama…maybe, even, with my resist-the-status quo bent, a particular place for my perspective and my voice.
https://thoughtstowardsabetterworld.org/wp-content/uploads/2022/04/thoughts-300x138-1.jpg 0 0 dickbernard https://thoughtstowardsabetterworld.org/wp-content/uploads/2022/04/thoughts-300x138-1.jpg dickbernard2015-03-21 05:45:592015-03-21 05:45:59#1004 – Kathy McKay: Going to Selma, 2015; Remembering 1965
0 replies