On Halloween night, 2000 – it was a Tuesday – my wife and I were in Washington DC, and managed to get a pass to see an evening session of the U.S. House of Representatives.
No cameras were allowed, so I have no photos. Down on the floor were two small gaggles of congresspeople, gathered on the left and on the right side of the House. A couple of people were giving speeches about, as I recall, ergonomics legislation.
Nobody on the floor gave any appearance of listening to the speakers.
What we witnessed in person was so strange that a Congressman, my memory recalls he was from Illinois in the Alton area, came up to the gallery where we were sitting and literally apologized for his colleagues behavior to those few of us who were sitting watching the spectacle below. To my recollection, he wasn’t running for reelection.
Soon came a vote, and red and green lights appeared on the tally board “stage left”. There were, it appeared, far more votes tallied, than there were people on the floor. Apparently the rules were that persons who had earlier checked in were able to vote from their offices or somewhere, present, though absent.
Afterwards I asked my then-Congressman if I could get a copy of the Congressional Record for that date. He sent it, and I still have it: the only such document in our home. 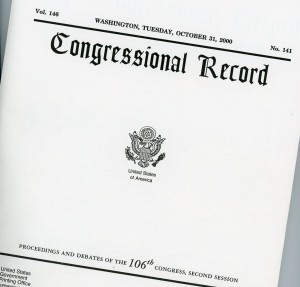 Some things, especially unpleasant, are worth remembering. Opportunities to learn come (hopefully) from bad experiences.
Exactly a week later, came Election 2000, the election of the “hanging chads”, where the U. S. Supreme Court ultimately ruled that George W. Bush beat Al Gore. A key popular vote was Florida’s. Note especially the Ralph Nader vote in 2000 in Florida. It is one my progressive friends like to forget.
That election was over 14 years ago, now, and in between the consequences have been lost in the “memory hole” of our national and collective repressed memory: Afghanistan, the Iraq War, which spawned ISIS; the very near collapse of the U.S. economy in 2008, and so forth.
Yes, some things, especially unpleasant, are worth remembering….
But we seem never to learn.
Witness the bizarre actions of 47 U.S. Senators just a few days ago. The closest analogy is some juvenile petition circulated around without a thought as to consequences. There are, by now, boat loads full of analysis about this petition. Here and here are two which I find most interesting.
And these signers are the most powerful and astute political people in the United States? They have instant access to all of the expertise this country offers, and this is the result?
There is no way to walk back the stupidity of this action, except by waiting for it to be forgotten by the people who elected them. The U. S. Senate dining room – I’ve been there once, in 1985, for lunch – is apparent haven for far more dim bulbs than just myself. 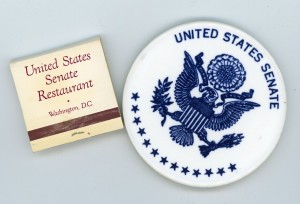