April 7 I was at committee meeting unrelated to politics or political parties, and my colleague sitting next to me showed me a book he was reading, which he felt was a must-read for anyone interested in politics. The book: “Winner Take All Politics” by Jacob Hacker and Paul Pierson. I have yet to pick up the volume, but I will.
A day later, late the evening of April 8, a government shutdown was averted by an agreement between House, Senate and White House. It is much too early to know what it means, and most of us will never know as the aftermath will be buried in the same rhetorical fog that accompanied the negotiations of the agreement. I kept thinking of assorted cliff-hanger negotiations I was involved with from time to time in my career. If people we were negotiating for only knew…. Sooner or later you’re stuck with making a deal.
Like the old story about the optimistic kid who comes into a barn full of manure and starts digging because “there must be a pony in here somewhere”, I have a little bit of optimism that maybe a tiny bit of sanity is beginning to prevail in this country. There needs to be a whole lot more, but at least there’s a start.
Even the sudden turnaround in the Wisconsin Supreme Court election due to quite certainly administrator incompetence rather than fraud is a hopeful sign for me. What had appeared to be an easy race for the apparent winner, turned into a near loss for him. What normally would have been a low profile boring election with a certain outcome turned into a cliff-hanger in the national spotlight. People are paying attention.
Winner take all politics is killing our country, and maybe, finally, some of us are paying attention. Maybe there is that pony down there. But if so, it’s a long ways down, and there’s a whole lot of digging to be done to find it.
Between the meeting and the drama in Washington, I attended a hugely informative two hour session entitled “Reality Meets Rhetoric: The Hidden Costs of State Budget Cuts“.
There were about 50 of us in attendance at the gathering. The session was expertly conducted. (click on photo to enlarge it) 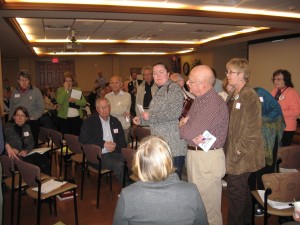 Citizens generating questions after one of the presentations April 7.

Four outstanding panelists gave an overview of and some context for our state’s deficit situation*. None of the presentors were politicians; all of them were in high level positions of advising, administrating agencies or lobbying. They know the lay of the land – what is inside that fog bank of political rhetoric. I could name their names and their credentials, but it wouldn’t matter. They were talking straight about a pretty harsh future if our lawmakers don’t grow up (my state is like most these days: politically divided and polarized. Not a whole lot unlike Washington DC or even Wisconsin.)
I was tired when I got home from the meeting, but nonetheless I felt better informed.
I wrote a thank you e-mail to one of the people who seemed to have an important role in helping set up the meeting, and she wondered: “It will be interesting to see what percentage of the participants are the same people who are super involved in the political process already and what percentage are just getting their feet wet. My goal was to start reaching the latter. How do we do that?”
“How do we do that?” is a legitimate question with an easy answer:
One person at a time.
I will always believe in the long term benefit of what I call “each one reach two”. It seems so simple. If the 50 of us who were in that room reached two others, that would be 100 more. If those 100 each reached two, that would be 300….
But you need to actually start doing this, first; and become as good at listening as talking. Results generally don’t come by just wishing for them, or blaming somebody else.
* – “Scribbles”: of course, in such presentations, the macro is emphasized. So, for instance, we’re dealing in Minnesota with a $5 billion dollar deficit which seems awful. But if one does the calculations, that is roughly $1,500 per Minnesotan, which MOST Minnesotans could absorb quite easily, and which SOME (the wealthy) could very easily handle, and MANY (the poor) could not. It would take very little creativity and little sharing of the wealth to deal with the entire deficit. Of course, the $5 billion was a deliberately created mess due to a refusal to “tax” to fund the programs Minnesotans demand.
Similarly, one of the presentors talked about the most expensive students to educate in Minnesota Public Schools. I recall the number was $12,000 per student per year (the average was, if I remember right, about $8,000 per pupil). This covers every cent of every expenditure by schools for educating our youth. For the most expensive student, it amounts to about $70 a school day, less if you factor in that the buildings must be maintained during the rest of the year etc. Is $70 a day for a child’s education too much? Where would you cut? I recalled being at a fundraiser for a private school for special needs kids – kids whose needs are beyond the capacity of public schools to serve. That school, two years ago, said the cost per student was $25,000 per year, double the most expensive public school student this year.
In short, talking MACRO can be scary; talking MICRO is more real….
Related Posts are here, here, and here.
https://thoughtstowardsabetterworld.org/wp-content/uploads/2022/04/thoughts-300x138-1.jpg 0 0 dickbernard https://thoughtstowardsabetterworld.org/wp-content/uploads/2022/04/thoughts-300x138-1.jpg dickbernard2011-04-09 03:56:462011-04-09 03:56:46#358 – Dick Bernard: Averting a shutdown. A tiny bit of optimism.