Nobel Peace Prize winner Dr. Wangari Maathai died September 25, 2011, in a Kenya hospital. I never met her, or knew much about her. I wish I had.
My friend Lynn Elling asked retired Minneapolis teacher Nancy Paxson to send along Ms Maathai’s obituary and her wonderful and inspirational recitation “I will be a Hummingbird”.
Lynn faces serious surgery Monday, October 10, and at 90 is an eternal optimist. “Can’t” or other negative talk is not part of Lynn’s vocabulary. That hummingbird had nothing on Lynn Elling, especially when it came to his absolute passion for peace.
As Monday approaches for Lynn, I want to share a memory that he shared with me recently.
Lynn is founder of World Citizen, and co-founder of the Nobel Peace Prize Festival, an annual event at Augsburg College in Minneapolis.
Each year since 1996, the Peace Prize Laureate of a preceding year has been invited to attend the Festival at Augsburg, and several laureates have attended.
Dr. Maathai was awarded the Peace Prize in 2004 for her Green Belt movement in her native Kenya, and she accepted the invitation to come speak to children at the March 2006 Augsburg Peace Prize Festival.
All was ready for the Festival except for the heavy snowstorm which brought the Twin Cities to a standstill. In early morning, the Festival organizers cancelled the event, and Dr. Maathai was marooned at the West Bank Holiday Inn in Minneapolis.
As Lynn recounted, he and several others managed to get to the hotel and at least give Dr. Maathai some company. She was in tears. She had so wanted to address the children at the Festival. Of course it wasn’t possible.
She made a huge contribution to the betterment of her country and the world in her lifetime.
The same can be said for Lynn Elling, though his accomplishments were more local.
Dr. Maathai’s Hummingbird lives on, thanks to Lynn.
Best wishes, Lynn, as you face your surgery next Monday. 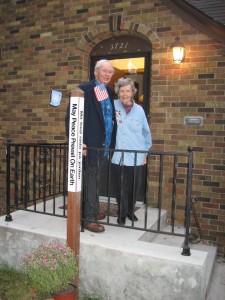 More about Lynn Elling here.
UPDATE October 13, 2011:
After posting this item, my wife and I were on an out of town trip for the following six days.
Lynn’s surgery appears to have been successful, and he is back home.
On October 6, Nancy Paxson sent an e-mail, received on my return, which further comments on the snowy day in Minneapolis in early 2006: “Hi, I treasure recalling that day. My husband & I drove through the deep snow to her hotel and were honored to be included in the group to go to her hotel room. The Ellings were there, as well as Joe [Schwartzberg] and the Augsburg camera guys who video taped her telling the hummingbird story and greeting the festival children, all to be shown in April when we held the rescheduled festival. I have pictures of that morning in her hotel (someplace ) and sent copies to Ellings and others. My Keewaydin [school] Peace Choir was prepared to honor her, so she asked me to sing bits of the songs for her, and we presented her with a lovely photo book of trees and wrapped it in one of those rainbow bandanas that the peace choir wore to perform. She was tickled at that, because when she was in Japan, they had a tradition of gifting in lovely cloth wrapping. I forget the term. I was a special day, and I have shared it with many students over the years, as we study the laureates.”
And, of course, in the past few days three women, Ellen Johnson Sirleaf and Leymah Gbowee of Liberia and Tawakkul Karman of Yemen, were named the Nobel Peace Prize Award Winners for 2011. According to the Nobel official site, their Awards are “for their non-violent struggle for the safety of women and for women’s rights to full participation in peace-building work.”
https://thoughtstowardsabetterworld.org/wp-content/uploads/2022/04/thoughts-300x138-1.jpg 0 0 dickbernard https://thoughtstowardsabetterworld.org/wp-content/uploads/2022/04/thoughts-300x138-1.jpg dickbernard2011-10-06 04:05:442011-10-06 04:05:44#451 – Dick Bernard: Hummingbird. Lynn Elling and Wangari Maathai