UPDATE February 5, 2011: Twin City Daily Planet review of the Ballet here; Minneapolis Star Tribune review here.
I was a very reluctant stand-in Thursday night, when we went to see the Ballet at the Northrop Auditorium at the University of Minnesota.
My wife had purchased tickets to the Voronezh State Ballet Theatre performance of Tchaikovsky’s Swan Lake at Northrop Auditorium, and I had no interest in attending. Her friend down the street planned to go, but was ill. An octogenarian friend across the street and his friend made up the foursome.
I came home delighted I had gone. 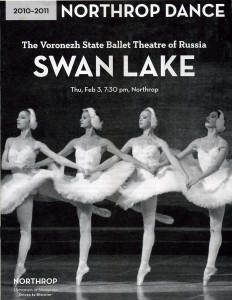 It would be foolish for me to proclaim any knowledge of ballet, what was good, what wasn’t.
Judging by the audience reaction from what seemed to be a full house at the immense Northrop, we were treated to first class ballet by a first class company. I’ll leave the performance details to someone else.
Ballet was not part of my growing up experience, in tiny towns in North Dakota. I am sure that someone out there ‘did’ ballet, but not within my own circles or experience. Me? It was hard enough to learn to Square Dance in 4H. I learned the waltz steps in my bedroom, and really struggled with polka, etc….
In those years, the 1940s and most of the 1950s, cultural communication was primarily through radio, and television was too primitive for large stage performances to broadcast well. So I don’t recall ever seeing the awesome precision and skill of a ballet company.
I do recall that one or the other or both of my parents liked to tune in the live performances of the Metropolitan Opera in New York during those days. Song was a medium one could listen to.
Tchaikovsky’s Swan Lake, the music for the ballet, was probably available on phonograph records, if one had such an interest.
I watched the performers in the 50 or so member company attentively, and applauded in synch with others who knew better than I when to express appreciation.
Someone said that old music, like Swan Lake, is losing its appeal to youth, and that programs like ballet are less common now than previously. I have no evidence about this. I did see a large number of young people, and it was not necessarily an audience that was only Russian or white European in ethnic makeup. There was a good variety of persons in the audience.
While Swan Lake has an unhappy ending, the ballet was a very happy experience for me.
During the first intermission, my wife and our octogenarian neighbor were discussing ballet, and she mentioned that during her high school years at St. Joseph Academy in St. Paul, that at least once a year the students would be treated to a performance by the local Andahazy Ballet Company – a familiar fixture in this area for many years. Don, our neighbor, said that in his younger years, which would have coincided with my wife’s high school years, he was a member of the Andahazy Ballet. Possibly, he had been a performer in one of those performances my wife had witnessed.
I began the evening with no enthusiasm at all for attending the Ballet; after the nearly three hour performance, I left happy and energized.
Thanks to everyone that got me involved in the evening.