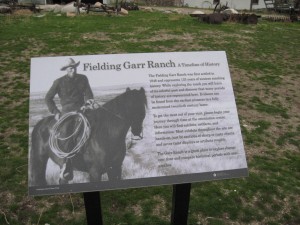 On our recent trip to Salt Lake City, we had an opportunity to visit the Fielding Garr Ranch on Antelope Island in the Great Salt Lake.
While the ranch, on the south end of the island, is only several miles west of Salt Lake City, the necessary driving trip is perhaps 50 miles or more, as the sole road entry to the island is over a long causeway on the north end.
It was a chilly late afternoon when we visited the ranch, and all of us probably wondered in various ways “why am I doing this?”, but I found the half-hour or so visit to be thought-provoking.
The story of the island and the ranch are told in the links (above). 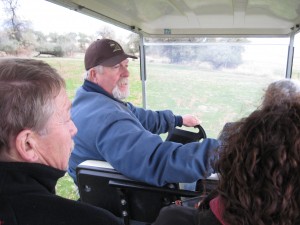 I kept thinking, as I shivered, and our guide gave us a most personable ‘tour’ of the environs, about that time back in the 1840s and 1850s, especially, when the west was being settled by white settlers seeking land.
We learned (and kids probably still learn) the romanticized ‘Cowboys and Indians’ version of the story, but this was a rough-and-tumble time in our history. The Cowboys won, the Indians lost, and that was that.
What the cowboys won, were they Mormon, or any other settler, was an unforgiving land where laziness or mistakes were not rewarded. Simply put, it was a struggle to get there, and to survive once there. At Salt Lake City’s Temple Square is a sculpture that tends to capture the difficulty of the move west. 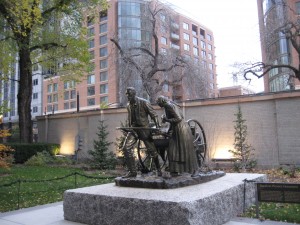 We’re a nation of immigrants. In my case, my French-Canadian ancestors got a bit of a head start on this continent, attempting to eke out a living in the 16 and 1700s in what is now Quebec, and like the Mormons, came west beginning in the 1850s; my German ancestors arrived in Wisconsin in the 1850s and 1860s.
All of the things we now take for granted, they couldn’t even imagine. Food had to be processed to last through winter, and, often, parceled out carefully. One didn’t jump in a car to get anywhere, or start a gasoline engine to do the chores. It was all by hand, often backbreaking.
As we viewed that chilly but bucolic area I would call the ‘farmstead’, I could imagine how life might have been back then. We wouldn’t have been sitting in a golf cart, listening to an enthusiastic and pleasant guide telling us about this place at which he was a volunteer. 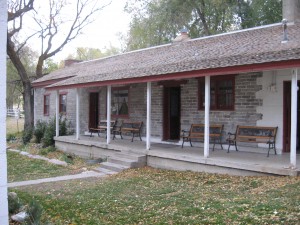 (“Back then” in reality is not all that far back in time. I can remember my grandparents farm before rural electrification brought electric current to the farm in the late 1940s. The end of the “olden days” is really pretty recent.)
It was a different time, then; a time almost unimaginable to today’s kids.
Out on Antelope Island these days, successful attempts are being made to reintroduce buffalo who are as nearly as possible the direct genetic descendants of the buffalo we very nearly exterminated back then. In other ways, the ranch and the island have become places to help visitors become better aware of the need for careful stewardship of ever more scarce resources.
Near the end of the trip the guide pointed out a building in front of the main house which had been the pump house. For many, many years it had been the source of spring water for the farm. In recent years, the spring stopped running – the water table beneath had receded due to increasing use in Salt Lake City to the east. No one in Salt Lake City would notice this change….
Be aware. What is may not necessarily be forever. 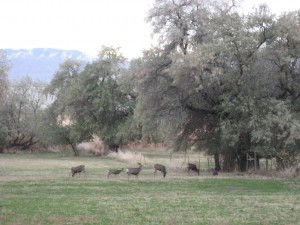 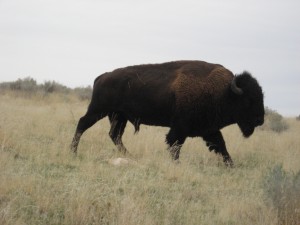