Two sold-out performances of Bottineau Jig, Untold Tales of Early Minnesota, attested to the interest in Dance Revels Moving History’s interpretation of the life and times of legendary Pierre Bottineau.
The program was performed at Intermedia Arts in Minneapolis, Friday and Saturday evening, April 1 and 2. The production was a creation of Jane Peck of Dance Revels. Jane is a long-time student of historical dance forms. The program proudly noted that the activity was “funded, in part, by the Minnesota arts and cultural heritage fund as appropriated by the Minnesota State Legislature with money from the vote of the people of Minnesota on November 4, 2008” (This is the Clean Water and Legacy amendment approved by Minnesota voters November 4, 2008.)
Pierre Bottineau (played by Dr. Virgil Benoit) was a legendary early founder of the Twin Cities of Minneapolis and St. Paul, and he was renowned guide in the white settlement of the upper midwest. Bottineau, Metis (Michif) born in the area of present day Grand Forks ND, was gifted in languages and a larger than life presence. He was one of eight pioneers who built the original log cabin St. Paul Catholic Church (the first Cathedral of St. Paul MN); he owned land and built the second frame house in what was then St. Anthony, later to become Minneapolis; he founded Osseo and later Red Lake Falls MN.
Jane Peck’s program was an extraordinarily rich demonstration of period fiddling, music and dance.
The program interspersed spoken word, ethnic music and dance, covering the period from Bottineau’s birth in 1817 through 1870. At the conclusion of the program the cast of 14 invited the audience to join them in a Red River Jig, and then engaged in discussion with the audience. (Click on the photo to see an enlarged version.) 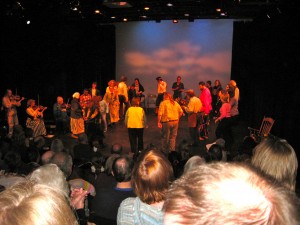 The program specifically intended to showcase an assortment of characters, not all well known in Minnesota History. So, Sarah Steele Sibley was emphasized over her more well known husband, Henry Hastings Sibley, and Franklin Steele, builder of the first house in to-be Minneapolis. Jacob Fahlstrom, early Swedish settler via England and years with the natives in Canada, and his wife, Marguerite Bonga, whose ancestry was a freed Haitian slave well known in what is now the Duluth area, spoke powerfully to the dilemmas of cross-cultural relationships in the newly emerging Swedish community northeast of St. Paul.
Among other purposes of the Bottineau Jig Project are, according to producer Jane Peck: “1) Offering the contributions and points of view of the mixed bloods and Metis in Minnesota history. They have been ignored as much or more than the French; 2) tracing the modern-day communities of some of the cultures represented in the play, including the Metis as the only modern mixed blood community.”
An expert cast was augmented by three fiddlers, all well known interpreters of Metis and French-Canadian music: Legendary Metis Fiddler from Turtle Mountain ND, Eddie King Johnson, gave his usual great performance, as did Twin Citians Linda Breitag and Gary Schulte. Larry Yazzie and Ricky Thomas provided outstanding dance, native and Metis. Other performers, all very engaging, were M. Cochise Anderson, Josette Antomarchi, Jamie Berg, Paulino Brener, Kenna Cottman, Craig Johnson, Scott Marsalis and Jane Peck.
Jane Peck has begun and will continue a blogging project on the Bottineau Jig at her website. See her site for more stories about Bottineau Jig.
Also visit the website of IFMidwest for upcoming activities in Virgil Benoit’s French-Canadians in the Midwest organization. The annual conference of IF Midwest is planned in Fargo ND October 7-8, 2011. Details will be at the website.
https://thoughtstowardsabetterworld.org/wp-content/uploads/2022/04/thoughts-300x138-1.jpg 0 0 dickbernard https://thoughtstowardsabetterworld.org/wp-content/uploads/2022/04/thoughts-300x138-1.jpg dickbernard2011-04-05 08:53:502011-04-05 08:53:50#356 – Dick Bernard: Bottineau Jig, Untold Tales of Early Minnesota