Sunday afternoon, enroute to other things, I found a cartoon I had saved for some reason back in March of 2002. (Click on photo to enlarge.) 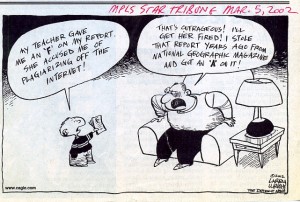 About the same time I found the cartoon, came a CBS “60 Minutes” segment on a New York City experimental school that pays $125,000 a year. You can see the segment here.
A few hours earlier, a couple of folks had forwarded on a Nicholas Kristof post on the same general topic. One suspects that he had access to the same general source as did 60 Minutes.
The previous day my local legislator and some in her audience were lamenting being unable to get rid of “bad” teachers….
The song goes on and on and on and on: get rid of unions, and so-called “tenure” laws which give “bad” teachers life-time no-cut contracts and all will be well.
Having been in the trenches for many years, including growing up in a family whose Mom and Dad were public school teachers (and excellent ones, including their public citizenship), I know that the cartoon catches the reality far better than the high-falootin’ philosophizin’. For assorted reasons, the Power that runs things cannot abide its Public Workers having any status even roughly equivalent to it. It, including that angry Dad in the cartoon above, demands a subordinate class.
It would be truly nice to have a substantive conversation about ideas such as the $125,000 teacher in every classroom. The way things are going, when that $125,000 goal is reached; poverty level will be, perhaps, $130,000.
I have all of my Mom and Dad’s old teaching contracts – there are 71 of them in all. I pulled them out for the year I graduated from high school – 1957-1958.
1957-58 was Dad’s 28th year of teaching. He had been serving as “Superintendent” of many tiny schools since 1940-41.
We had lived in this town before, from 1945-51; in the interim, there were three other places, till Dad and Mom got another contract here. In addition to doing the assorted kinds of administrative things that go along with administrating even a tiny school, Dad had to teach two classes, as well as Drivers Ed, and he had to Coach sports. The latter was something he wasn’t interested in and was not good at, but there would have been no Basketball or Football had he not taken it on.
There were about 45 students and two other teachers in his tiny high school; my Mother taught the elementary (most elementary kids, including three of her five children, were in the Catholic elementary school down the street.)
That year Dad was paid $4800 with no fringe benefits and, excepting a one year contract, no legal protections whatever. At the end of the year his reemployment was completely at the whim of the local school board.
For Mom, it was her 17th year as a teacher – the off years were to bear and raise we kids. Her salary was $3000.
Likely there were plenty of people in that little town who were envious of this two-income couple. 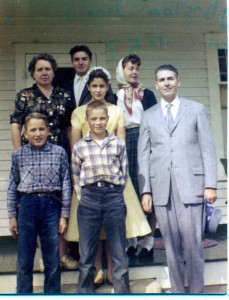 They lasted three more years in that place they were content to be, but their contract was non-renewed by the school board for some reason they had no right to know, and off they went again.
Teachers everywhere and in every age can tell similar stories. Even the ones who confide to their friends that they don’t like the Union, are the first ones to call for help in times of trouble.
Trust me. I know.
Something else has become very noticeable today. In the relatively short time I watch TV each day: the ads heavily focus on the “me”. No longer is it adequate to be covered only by a group insurance plan (if you are so fortunate as to be in one). Now the rage is to build a plan to your own specifications. Etc. Of course, with sophistication of data management, such things are possible these days. On the other hand, such schemes are just further evidence of the breakdown of our society into a mass that is the have-nots, versus the truly elite individuals who are the haves, and who believe they have earned and deserved their right to make choices.
This is a time of back-sliding. It is only a matter of time before there will be a reaction, and it won’t be pleasant. Unions didn’t happen because of benevolent and enlightened management. Quite the opposite.
One reaps what one sews.
Teachers, their unions, as well as other employees and their unions as well, may be open to criticism, as any other persons or entities are open to criticism, but we will all rue the day Unions go out of existence or are stripped of their power. Most of us are, after all, subordinates, and Wisdom does not necessarily follow Power. 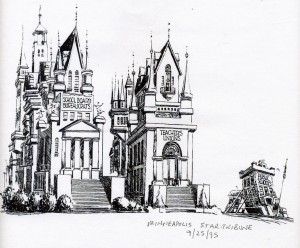