A couple of days ago a friend sent me this forward.
It is an intriguing piece of video, especially for someone like me who was 10 in 1950 and 20 in 1960. It only takes two minutes to view. Take a look and return.
There is, of course, lots to agree with, especially if you lived through childhood and adolescence then. (I’m fond of saying that the real proof that there is a God, is any kid who survives childhood. I can tell my stories; you can as well….)
At about the same time the video crossed my threshold, so did the below 2×2 well worn time-damaged photo labelled “Berlin [ND] Picnic Sept 7 1952”. The handwriting is unmistakably my grandmother Rosa Busch (who is at left in second row behind the little child and, likely, the childs mother.) I have scanned the photo at high resolution so as to make it possible to easily enlarge it. Most likely, given the nature of that day, this is the Ladies Aid (or Rosary Society?) of St. John’s Catholic Church in Berlin.
Take a look at those Moms, in my Grandmas yard, September 7, 1952. Their’s are the faces of the good old days. 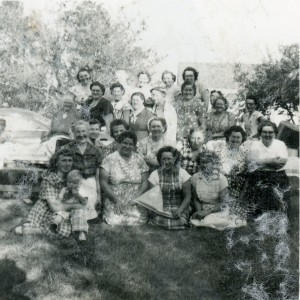 I took a look at mortality statistics for our country – sort of the marker for how it was, and how it is. Here are a couple of items worth looking at:
(1) a chart about developed world life expectancy at birth from 1950-present is in the upper right hand corner, here. (click on the chart to enlarge it) NOTE: the projection to the end of this chart is to 2045; notice the point on the chart for 2010-15.
(2) 75 Years of Mortality in the United States 1935-2010 from the Centers for Disease Control.
It would seem to me that a 12 year increase in average life expectancy from about 66 to 78 years over 65 years of history (first chart) is pretty significant.
Maybe there were some down sides to the good old days?
But maybe we prefer looking at the up-side of some of those changes which the video narrates?
Start with the photo of those women. In 1952, the status of “women’s rights” was much different than it is today.
Change didn’t come easy, but it came.
As for surviving, I’m one of those who lucked out, who made it through the assorted risks of growing up. There were far more risks then, I know. No seat belts in cars; you took your chances with drinking water and home-canned food. Who of my age does not recall the lines to get the Salk Polio Vaccine back in those early 1950s?
And the bomb shelters which reminded us that we were in some bulls eye for one of those Soviet bombs aimed at us (and we aimed our own bombs at them, I guess).
I watched Sputnik blink across the night sky at exactly the same spot as the photographer in the same yard of my Grandmas in the Fall of 1957. In those days, Sputniks path across the night sky was printed in the newspaper (it would have been to the photographers right, to the southeast), and on a clear night, as the saying goes, you could see forever, especially on the pristine prairie “back in the day”.
Now, I’m at the age where nostalgia tends easily to trump reality: it is fun to look back in memory to how it used to be (I think).
But not so fast: I see Johnny, in my North Dakota town when I was 10. In today’s terms he’d be so-called severely retarded. He lived at home, and he was older than we kids who used to persecute him till he’d chase us down the street with a bat, or a stick, or whatever. I was not “happy days” for Johnny (who’s still alive, I hear.)
In many ways we’ve over-corrected, I admit, but by and large I’d rather be where I am, now, than back in those olden days.
COMMENTS:
from Joyce, June 3: Whenever someone waxes nostalgic about the good old days, I think about the plight of those for whom the ’50s were a horror show, in particular, African Americans, but also intelligent women who had few outlets for their intelligence, Jews (universities openly had Jewish quotas in those days and HR departments displayed signs stating that Jews need not apply) and all the people whose careers were destroyed by the McCarthy witch hunts.
from Flo: Thanks for bringing some reality to the good old days! Some kids who were tortured by parents, siblings, or bullies are the angry ones now torturing all of us in retribution!
https://thoughtstowardsabetterworld.org/wp-content/uploads/2022/04/thoughts-300x138-1.jpg 0 0 dickbernard https://thoughtstowardsabetterworld.org/wp-content/uploads/2022/04/thoughts-300x138-1.jpg dickbernard2015-06-02 16:45:322015-06-02 16:45:32#1033 – Dick Bernard: The Great Olden Days of the 1950s

I “watched” the State of the Union address in its entirety last night. The word is in quotes, because, while I sat in front of the TV, I mostly watched with my eyes closed.
In other words, I listened, like one would be forced to listen in pre-television and instant analysis days which in historical terms are really very recent.
I didn’t stick around for the responses of Reps Ryan and Bachmann. In historical terms, such responses are really very recent.
I have my own e-mailing list, and when I awoke this morning sent out the four overnight analyses received on internet, the first from the President himself, and advised readers that from this point out I’d send out only their own personal commentaries. The punditry and political ‘blab’ will be interminable and predictable. Talking heads, talking.
Nothing is left to chance in today’s management of news and images. Every single person sitting in the House Chamber last night knew that they were potentially on-camera every second. Their focus was likely not really listening either. Rather it was to have the appropriate stage-look: enthusiastic, bored, angry…. “You lie” was out this year, and good riddance. Rep. Gabby Giffords empty chair spoke volumes without saying a thing.
Personally, I thought the speech was very good, but that’s simply personal opinion. I’m a strong supporter of this President.

The President’s “Sputnik” comment really resonated with me: I was a Senior in high school when Sputnik launched in October, 1957, and in those years we occasionally watched Communism blink over Capitalism in the clear night sky of North Dakota: in those years, the newspaper published where and when to watch for the blink as Sputnik tumbled, reflecting light from the sun. I wish I would have kept one of those Fargo Forums including a tracking map.
I hadn’t cleared my Freshman year in college when Castro took over Cuba in 1959, and I was a Junior in college when John F. Kennedy was elected U.S. President in 1960; and in the Army during the Cuban Missile Crisis of October, 1962. I saw the transition from then history to newer history, ‘boots on the ground’.
All of that was then. Back then, the war was over ideology; today, I believe, the War is over how or whether the generations which follow mine will survive or thrive. 1957-58, even with the much-played Red Menace of the Soviet Union, was a really simple time compared to today. We couldn’t imagine, then, even the possibility of running out of things, like oil; or other things, like the internet which has already been so much a force for good…and, yes, evil.
Now the debate begins about the future.
Frankly, I have zero interest in what the pundits say, or who the politicians blame.
I will focus on two quotations, one of Margaret Mead, the other of Gandhi, which “frame” the home page of my website which acknowledges the contributions of two of my personal heroes, Lynn Elling and Prof. Joe Schwartzberg.
Our future is NOT a spectator sport.
Either we’re on the Court helping to constructively fashion the solutions for our future in small or large ways, or we have no right to complain about the results.