The call came on Friday. It was unexpected only because I didn’t think I’d be in the communications loop.
Sister Victorine Long CSJ had passed away at Bethany Convent in St. Paul. She was 90. Her niece said she had a folder of assorted photos and letters for me – items which Sister Victorine had kept over the years. 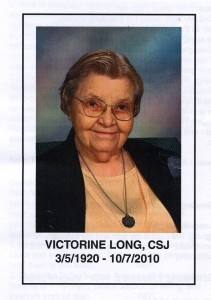 I went to Sister’s funeral on Saturday, and her niece, Sister Lillian, gave me the folder which brought back many memories of not only Sister Victorine, but four of her colleagues at Bethany who had preceded her in death.
The six of us were occasional friends, sometime correspondents, infrequent lunch companions at Bethany, which is the home for elderly and disabled Nuns of the St. Paul Province of the Congregation of St. Joseph of Carondolet (CSJ). These are the Nuns who founded the College of St. Catherine and St. Joseph’s Hospital in St. Paul and many others. They are a remarkable Order among many Orders.
For me, the relationship began in the early 1990s when a CSJ, Sr. Mary Henry Nachtsheim, CSJ, and I got to know each other in a French-Canadian Club, La Societe Canadienne-Francaise du Minnesota (LSCF). Sr. Mary Henry and I served on the Board of now-defunct LSCF. I doubt she had a lick of French blood, but she had a passion for things French, and her career was teaching French at the College of St. Catherine.
Before she died in 1995, Sr. Mary Henry introduced me to Sr. Ellen Murphy, CSJ, a remarkable poet, born and raised on a farm at Bachelors Grove ND. (See the poem at the end of this writing.) Hidden behind Sr. Ellen’s Irish name was her French-Canadian mother whose maiden name was Normand, and who grew up in the same community as my Grandmother, Oakwood ND. Sr. Ellen had a great interest in things French-Canadian. As she grew older, she took up residence at Bethany.
In turn, she introduced me to Sr. Ann Thomasine Sampson, CSJ, a resident of Bethany, and at the time I met her an historian completing a fascinating history of some of the powerful women who led the CSJ’s (“Seeds On Good Ground”, 2000). 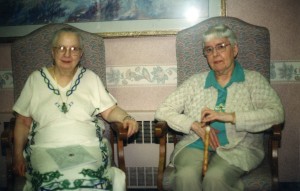 Ellen began to organize occasional and elegant formal luncheons for the three of us in the Bethany dining room. We had fascinating conversations about many things.
Ann Thomasine shared Ellen and my French-Canadian heritage, and while we never talked about it specifically, most certainly her family name, Sampson, while rooted for her in Minneapolis, also migrated to Oakwood, a community near Grafton ND.
Early on Wisconsin native Sr. Magdalen Schimanski, CSJ, joined the occasional table get-togethers. Like the others, Magdalene had been a CSJ for many years, and she, too, was a resident at Bethany. I knew her primarily in connection with the Art Department at the College of St. Catherine, which she had headed. Her art hangs in the reception parlor at Bethany and in our home as well. While she was not of the French-Canadian cloth, we all had a great deal to talk about in our every now and then lunches. 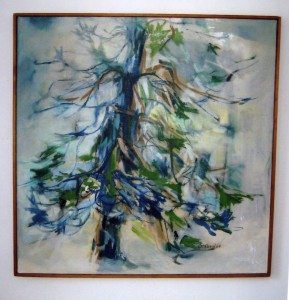 Sometime in 1999, Sr. Victorine Long joined the table. Word apparently had gotten around that a North Dakota native was lunching with the other Nuns. Not only was Victorine a North Dakotan, but she had grown up at the same time and same rural countryside (near Berlin ND) as my Aunt Edith. They were four months apart in age. Victorine, 79 when we met, had most recently been a medical professional in Jonestown, Mississippi during her “retirement”. Like the others, she had a quiet and very accomplished careerVictorine Long002.
Life went on, as did age, and my friends, all of whom had joined the CSJ order in the 1930s, slowly became more and more disabled. Sr. Victorine organized our last luncheons. Sr. Ellen was second to die in about 2004; then Sr. Ann Thomasine. The last time I visited Sr. Magdalene she was waiting for the release of death from her physical maladies. I walked down the hall that day and Sr. Victorine had no idea who I was – for her, her mind failed before her body. Sr. Magdalene passed away last year, and now Sr. Victorine is gone, and the luncheon table is empty for now.
When I viewed Victorine in the simple pine box at Bethany Chapel Saturday, I revisited and remembered some wonderful conversations with some wonderful ladies. I wonder how they’d comment on happenings today. They were far more than one-dimensional.
They are all at peace.
If I Am There
Sr. Magdelen Schimanski CSJ
in Sisters Today, March 2000, p. 90
Spring will go
and summer come.
Who will care
if I am there
when leaves fall
and then snow
softly covers all?
Saint Catherine’s Wood:
Reflections On An Autumn Scene
Sr. Ellen Murphy CSJ revised, 1994
We looked in wonder from southwestern slopes,
facing the wind, facing the guardian wood
where every shade and shape of leaf was moved
to catch our ears with murmurs, hold our gaze
with bronze, gold, crimson, russet leaves
the windswept boughs let fall
within our old and ravaged,
dear and criss-crossed wood. But then –
it’s true –
Progress brings need to dig and dump and plough
now here, now there – where ecosystems grew
fresh revelations of the Love we knew:
the bottle gentians, lupine, ferns and moss,
the owl and thrush, the moth and butterfly –
a myriad of those shy and gentle lives that must
thrive upon trust – all there on common ground
like you and me. Their lives a providence
of earth and sky and love and mystery.
Some trees are bent with burdens not their own.
Some stand tall and open as a prayer
that hasn’t yet received its sure response. Their
dignity, their strength will come to life
through temporal loss. Their life’s austerity in ways
like Monks whose spirits thrive through Lenten days.
What if today from every compass point
the Angels of the Earth called out, ‘Do not impair
the sole protection of the ozone layer. Do not unsheathe
the suns life-fostering rays; do not pollute
the vital air you breathe; your temporal light
that gives you such delight. Love meant all these to be,
with sheltering trees, the mainstays of your life.’
What if an Angel called to all of us in time
a louder, more peremptory ‘Wait! O, do not harm
the land, the sea, the trees! And then revealed
that God, our Love, will now make all things new:
our ravaged planet and polluted air, our ruined
ecosystems’ ecospheres. The stones
that tell our earths history, the song-birds’ bones.
All that we mourn for in our Guardian Wood.
All of creation that He looked upon
and found so good.
https://thoughtstowardsabetterworld.org/wp-content/uploads/2022/04/thoughts-300x138-1.jpg 0 0 dickbernard https://thoughtstowardsabetterworld.org/wp-content/uploads/2022/04/thoughts-300x138-1.jpg dickbernard2010-10-10 14:38:512010-10-10 14:38:51#255 – Dick Bernard: Au Revoir to Five Sisters