Related post here.
Today is the two-month anniversary of Occupy Wall Street (OWS). This writer urges that the movement build on its initial success by changing tactics.
Pre-Comment from William in east suburban St. Paul: “Dick, this OWS may be cathartic for the demonstrators but will not have any lasting effect unless it results in actual political activity at the caucus level in getting candidates for office that support their positions and getting out the vote (theirs and others ) in the 2012 elections. The same holds true for all of the rest of us of course!”
*
During a number of years of participating in protests and demonstrations, I always heard the phrase that heads this post. It was a common ‘call and response’ one, catchy, pertinent, easy to recite: “ain’t no power like the power of the people.”
The phrase carries a great deal of meaning. But I wonder if the people reciting it really catch what it really could mean if they were doing, as they were reciting, the phrase.
As best I can gather, OWS and the Tea Party have the active allegiance of similar numbers of the “99%”. Both groups are small relative to the total population. The Tea Party has a two year head start, but is flagging badly in the court of public opinion. The Tea Party has been co-opted by the very real “power” of the 1%ers. This is a crucial time for OWS.
In our society we are familiar with assorted manifestations of power. A very long list can be made.
Perhaps 25 years ago I heard them explained in a particularly useful way, and a few years ago I created the slide which is shown below. Of course, this is only a partial list: how about, for example, gaining power through the correct marriage? 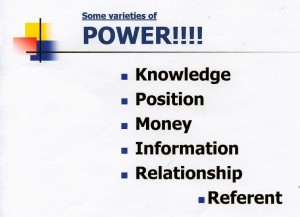 The one I wish to focus on in the above list is the last one, which the speaker called “referent power” for some reason. It is one about the “power of the people”; the power of relationships within the 100% of humanity.
To give “ain’t no power” meaning, we really need to get into action, into what is called civic engagement, with and among people who may not share our precise view of reality.
I recently witnessed this kind of call to civic engagement action at the annual celebration of the Minnesota Alliance of Peacemakers Nov. 8. Perhaps 300 of us, mostly in the “graying age” and “birds of a feather”, were there to listen to a representative of the group Move to Amend, whose focus is on challenging corporate personhood and re-creating democracy. The evening was really generated by the actions of two brothers, Laird and Robin Monahan, who, the previous year, had walked across the United States in protest of the Supreme Court decision in January, 2010, which declared corporations as persons under the law.
Their walk only started their action.
Our speaker was there to encourage action and dialogue. He yielded part of his speaking time to a young representative of the Occupy Minneapolis group.
At the end of the evening, the Director of the Twin Cities Gay Men’s Chorus, led his 150 person choir in song, and in between encouraged us, without becoming overtly political, to become aware of the issues facing the Gay Community. (The Gay Men’s Chorus is a phenomenal group (photo below, click to enlarge). Check out their website and let others know of their program.)
There were other examples of encouragement towards civic dialogue within this same meeting. It was a great night.
Personally, I think it is a good time for the Occupy folks to regroup and take their message to the people where they live. I think their visible presence these last two months has been incredibly effective, but it is back home with friends and neighbors and relatives that the real impact will be made. That is the “referent power” in the illustration. My friend, Jeff, said it well yesterday: “I think the OWS people in NY have taken the right view, its not the “place” , it’s the movement, so you “move on”….” William, at the beginning of this post, makes a similar point. 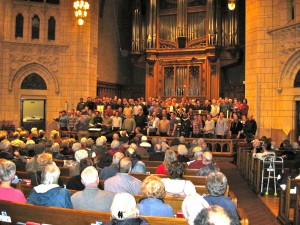 Comments from some others who were there Nov. 8.
From Val in suburban St. Paul:
[Our speaker] took great pains in laying the groundwork for taking action…love of God and neighbor, purpose of church, and everyone’s role in working toward justice…justice as an expression of love. He could get all the gray haired grandmas willing to go to jail for the cause.
The ‘Move to Amend’ movement has a much broader scope than just un-doing the Supreme Court decision of 1/21/10. I was surprised by this – not bothered by it. I appreciated his knowledge and background info on the subject.
What better way to send folks out into the night than the voices of the 100+ male chorus.
Grateful I was able to attend,
Bob from suburban St. Paul:
I was there and found his presentation to be quite powerful and motivating. I also felt some pride that one of my fellow Greens was taking on the issue of corporate personhood. It has occured to me that we need a international political movement to take on the transnationals who are now in charge of the Global economy. The Green Party has a presence in 90 countries and is the fastest growing political community in the world, which could present a vehicle for challenging corporate dominance. The labor movement has not found the formula for addressing the ability of corporations to just keep moving their facilities to the cheapest labor sources.
“There ain’t no power like the power of the people, like the power of the people, say WHAT>” “There ain’t no power….”