We watched the first segment of Ken Burns latest documentary on PBS last night. (Part 2 of the 3 part series is tonight at 7 p.m. Sunday nights program here. More details including archived material here.)
I very highly recommend watching the entire series…and doing more than just watching: it is a natural for very serious reflection.
Disclaimer: I am not a tee-totaler. On the other hand, if I was the statistical average for consumption of beer, wine and spirits, the alcohol industry would scarcely exist. My parents were, I believe, tee-totalers. They never said why, but my guess is that for both of them, their opinion was formed through earlier family experience. I’m the family historian. I can speculate.
As I watched Prohibition last night, I kept thinking of the arrangement on my office bookshelf, which has been directly behind me whenever I’m at this computer screen, and has been the same for many years (you can click on the photo to enlarge). 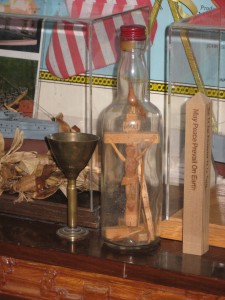 Front and center is a Crucifixion in a bottle, one of several made by my Grandfather Bernard at some point in his life. The bottles, all the same, were said to be whiskey bottles. Grandpa in his early life was a carpenter, a lumberjack and miner, later in life chief engineer in a flour mill. According to my Dad he did these creations himself. They are rough yet precise works. It is unknown when he crafted them. He died in 1957.
To the left of the whiskey bottle is a goblet made of shell casings by my Uncle Frank, Grandpa’s son and Dad’s brother, in the machine shop of the ill-fated USS Arizona (where Frank died and his burial place). Behind the goblet is a model of the Arizona. To the right is a mini-Peace Pole given to me by my friend Melvin Giles some years ago. And behind all of them is a portion of an American flag. Invisible to the right is a model of the Destroyer Woodworth, on which my Mother’s brother, Uncle George, was an officer in WWII.
As I say, all of these have a long history at this particular place in my office, behind my computer screen. Together they evoke “America”. And at the center of it all is a Whiskey Bottle and a Crucifixion scene….
Part One of “Prohibition” recounts the nearly 100 year effort to ban alcohol in the United States. It is a story full of personal tragedies, zealots, charismatic evangelists, superb lobbyists, and the usual collection of political characters, saloon keepers and charlatans.
Prohibition became the 18th Amendment to the Constitution of the United States in 1920.
Part two and three of the series will detail the failure of this campaign prohibiting a behavior and the ultimate repeal of the Amendment – the first (and last) such action ever in the 224 year history of the Constitution. What good it might have done was likely exceeded by the negatives.
The learning opportunity from this film comes, in my opinion, not from the event itself, but how it relates to all manner of schemes and causes to require this, forbid that, or condemn the other.
The list is very, very long. Pick your particular bias – something that you think should be done, and required of everyone. It’s on my list. And there’s some charismatic leader who can sing a mean song, and some passionate zealous followers who cannot conceive a country or a world without their passion being enacted to their satisfaction. The cause is their crusade.
As prohibition proved, such things never ever work. The experiment in prohibition should be an object lesson.
But, you say, “that was then, and this is now”?
Sure it is.
Think.
UPDATE October 5, 2011: We watched Parts 2 and 3 of Prohibition on Monday and Tuesday evening.
I’d highly recommend the entire Prohibition series for stone-sober viewing and then deep reflection about what will (not “can”, but “will”) go wrong, for any zealots, ideologues, moralists, etc. who think they can successfully manipulate American diversity by their own scheme or design. This includes the ones who claim to have the objective truth, not to mention God firmly on their side.
As the five hour series demonstrates, you can reach a peak in power and influence, but it is a long and certain fall from the pinnacle in ways you could not anticipate, and in the process you inflict considerable damage upon the very society you proclaim to save.
As I mentioned, I am neither a tee-totaler nor a drinker worthy of the label.
Makes no difference, I’ve seen the ups and downs of this and many other issues over the years. The ideals collapse upon very different realities.
I never studied the subject of alcohol (and tobacco) consumption, other than by observation during my adult life. Legally mandated notice about such as the dangers of alcohol and tobacco use certainly did have a positive impact. But, I think, the greatest impact on the body politic was simple changes in the way people were, together. It used to be, for instance, that you could find accommodation for smoking everywhere. Today smoking is by no means an endangered vice, but it doesn’t hold a candle to what it used to be, and nobody had to pass a constitutional amendment to make that so.
This will not stop the power people from attempting to move their own political agendas, from attempt to outlaw certain kinds of marriage, to mandating war without end, to perpetual and enduring peace, to ridding the world of abortion, or to rendering irrelevant certain political factions which hold different opinions from the temporarily dominant majority. Dreams ultimately collide with reality.
All the carefully concocted schemes will, at minimum, collapse over time, leaving rubble in their wake.
Will our societ collapse along with them?
Go to the link at the top of the page to rewatch the series, or check with your local PBS station.
Don’t miss it.