After the recent Nobel Peace Prize Forum at Augsburg College in Minneapolis I posted a small album of 46 photographs of the Forum on Facebook.
I chose as the “cover photo” the grainiest of the lot, taken by someone with a cell phone of my friend, Melvin Giles, giving a small Peace Pole to former S. Africa President and 1993 Nobel Laureate F. W. deKlerk. 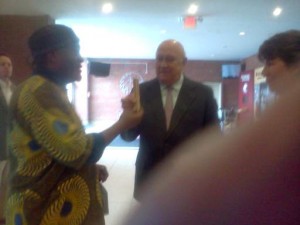 Melvin is one of those legions of unsung heroes of contemporary life: people who make a difference almost anonymously.
For St. Paul’s Frogtown native Melvin Giles, the passion is a more peaceful community and world. And he walks the talk.
I don’t recall exactly when I first met him, but I’m guessing it was about six years ago, when this enthusiastic guy showed up at a meeting I was attending and started blowing bubbles, those you often see after weddings. I was the President of the organization then, and Melvin came as one of the reps, and he lit up the room.
I got to know him as the Peace Pole Guy, and if you’re interested in Peace Poles and related links he’d recommend this internet link. He’s an authorized representative in the midwest for this organization, the original Peace Pole Makers in the United States. He is also Regional Peace Representative of World Peace Prayer Society (WPPS). He says, “I consider them the god-parents of the Peace Pole and Peace Message: May Peace Prevail On Earth. WPPS works on a global level and on programs and projects that are youth focus, as well as inter-generational.”
As time has gone on Melvin and I have gotten to know each other a bit better, and my first impression has been reconfirmed over and over. In an unreal world, Melvin’s the real deal. What you see is what you get: a kind, gentle man.
He’s given small peace poles to previous Nobel Laureates at the Forum, and this year was no exception.
See the photo gallery about Melvin below. If you’re ever in the market for a Peace Pole, I’m sure Melvin would be glad to help out. You can reach him at PeaceBubblesATqDOTcom.
“May Peace Prevail on Earth.”
UPDATE March 17, 2012: from Deborah Moldow of World Peace Prayer Society: What a lovely and fitting tribute to a peacemaker of the first order!
Melvin does more than walk his talk: he lives it. From the first, he understood the meaning of the Peace Pole project in a very deep way – and proved it over and over among the diverse population of the Frogtown community.
My very favorite Melvin achievement is the Peace Pole outside the police station that welcomes the immigrant communities with a message of peace in their own languages. Brilliant.
I am proud to know Melvin and absolutely delighted to see him recognized by your loving words. Thanks so much for sharing them with me.
May Peace Prevail on Earth!
Infinite gratitude,
(click on photos to enlarge them) 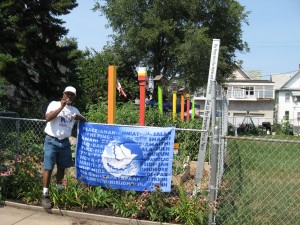 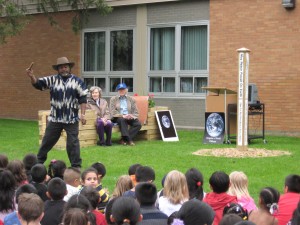 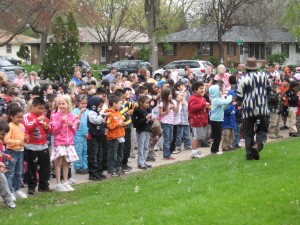 Peace Bubbles dispensed by Melvin at Centennial Elementary May, 2008 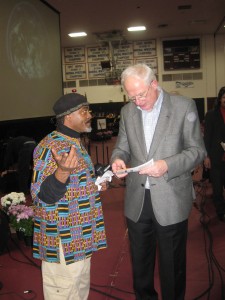 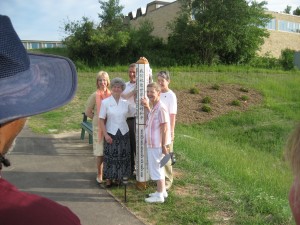 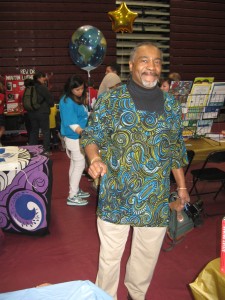 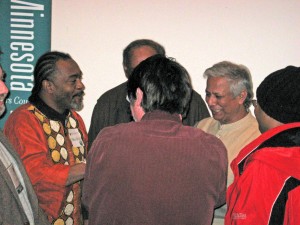 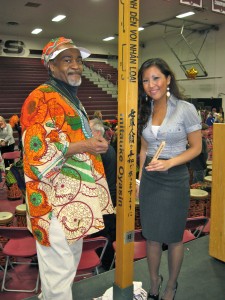 Today was another stunningly beautiful Minnesota Fall day, a perfect day for – as the invitation stated – “a peace pole planting & dedication ceremony” at St. Anne’s Episcopal Church in Sunfish Lake MN. I took the drive over to the picturesque church. It is a place I have passed by often, but until today never actually entered.
There are hundreds of thousands of peace poles around the world in almost any kind of location. As the St. Anne’s program stated, “In planting peace poles, we are linking with people all over the world who have planted Peace Poles in the same spirit of peace.”
I gathered that the peace pole project at St. Anne’s was a creation of the youth of the Parish who did the fundraising for the project. Rather than a single pole, the decision was made to plant three poles in a specially constructed Peace Garden near the Church. The project took one and one-half years to complete, but in the end the children had raised more than enough money for the poles which speak “…”May Peace Prevail on Earth” in Arabic, Chinese, English, Greek, Hebrew, Hmong, Maya, Ojibwe, Paw Prints, Somali, Spanish and Swahili.” (Among the onlookers was a gentle dog, for whom the Paw Prints fit!) 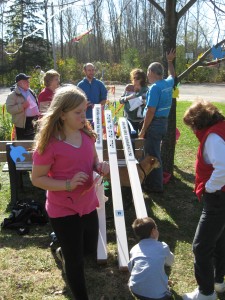 The Peace Poles prior to planting.

I have been to numerous dedications of Peace Poles, Peace Sites and the like, and they share commonalities, though they are planned individually, often over an extended period. Each are unique and inspiring.
At St. Anne’s, the opening prayer was as follows:
“We gather here today as diverse expressions
of one loving mystery –
To celebrate,
to sing,
to accept differences,
to promote justice and peace.
To recreate the human community.
We gather to plant these peace poles as a sign of
our commitment to nurture and encourage the seeds of
peace already planted in our community and in the world.
As we plant these poles, we commit to:
seeking peace within ourselves and others,
promoting understanding,
celebrating diversity,
caring for our planet,
reaching out in service,
working for justice,
and creating, in this place,
a sanctuary where all are embraced.
We are called to peace.
Peace within and peace without
Peace before and peace behind
Peace on right and peace on left.
We are called to peace.
Peace with brother and with sister
Peace with neighbor and with stranger
Peace with friend and with foe.
We are called to peace.
Peace in work and in play
Peace in thought and deed
Peace in world and in action
We are called to peace.”
The gentle ritual continued with a Song of Peace, readings from different traditions about peace, and thence the planting of the three poles with members of the group, young and old, contributing earth to the holes in which the poles were planted. 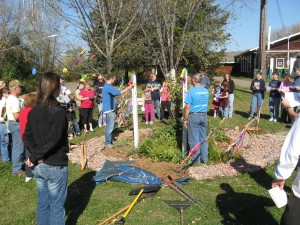 There are many perfect ways to do Peace Poles and Peace Sites. St. Anne’s was one of those perfect ways.
More information and ideas about Peace Sites and Peace Poles and other Peace programs are accessible at the website of World Citizen.
“Let There Be Peace On Earth” (one of today’s songs.)
https://thoughtstowardsabetterworld.org/wp-content/uploads/2022/04/thoughts-300x138-1.jpg 0 0 dickbernard https://thoughtstowardsabetterworld.org/wp-content/uploads/2022/04/thoughts-300x138-1.jpg dickbernard2010-10-16 14:34:482010-10-16 14:34:48#258 – Dick Bernard: Planting Poles of Peace