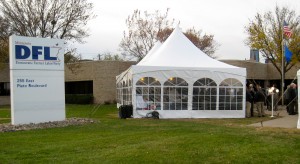 One of tents for Founders Day celebration at Minnesota DFL Headquarters October 29, 2011

When I made the decision to create this blog two and a half years ago, I had to decide how to label myself. It was not a difficult choice: “moderate pragmatic Democrat” is what I called myself then, and I’ve not seen any reason to change the label.
Each word, of course, carries its own meaning. As owner of this particular label, “moderate” and “pragmatic” speak a personal truth I learned over many years of advising and representing people. It is great to have ideals, but the reality of our communities and our nation and world is much messier. We are a “booyah”, a stew, of infinite variety. Anyone who seeks to impose his or her views on everyone is in for a very rude awakening, if not in the short term, certainly in the longer term.
As for “Democrat”, I’ve mostly been quiet, but in more recent years more active and visible. The Democrat view I see is more oriented to people at large, rather than to the most powerful, the ones who can control through money and media in particular.
Of course there are infinite points along any ideological line. Some progressive friends would view me as a sellout to the cause; some off to the right wing would view me as a socialist, or worse (I spent most of my career working for a Union – one of the hate words in the right wing lexicon.)
But that’s who I am.
Earlier this evening I drove over to the newly refurbished DFL Headquarters on Plato Avenue in St. Paul. It was a celebratory evening, featuring Guest Speaker Sen. Bernie Sanders, Independent of Vermont. In the gathering period before the dinner (I did not attend the dinner) was the motley variety of people I have come to expect at DFL events. This is truly a ‘big tent’ organization of people who care about people. 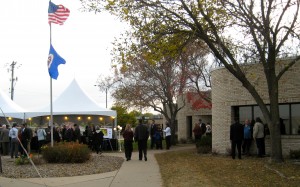 Wandering around the attractively remodeled headquarters of the State DFL, I came across a couple of quotes which serve as well as any words I might add to this blog.
I close with these two quotes, engraved on the walls of the headquarters (click on photos to enlarge them).
We would be well advised to follow their sage advice: 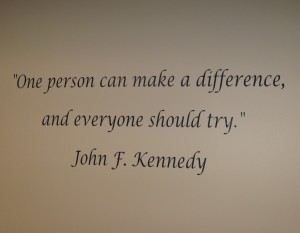 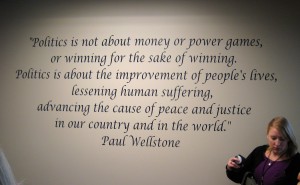