Tonight President Obama presents his State of the Union message to Congress. I will watch it. Here’s a preview.
Sunday night my favorite blogger, a retired guy in Los Angeles, Alan, succinctly described the history of the State of the Union in the first few paragraphs of his six-days-a-week blog, Just Above Sunset. You can read that here.
A week from tonight, Tuesday, Feb. 4, here in Minnesota, is a far more important meeting in every community, the Precinct Caucuses. I urge you to attend yours. I wrote about this last week, here. Most every state, I reckon, has something similar, albeit called something else or at different times.
Do attend yours. It is at these meetings that citizens begin the future, for good or ill, through becoming political party delegates, passing resolutions, etc.
In between the caucus and the State of the Union comes the very difficult job of managing our complex society, through numerous democratically selected entities: legislatures, school boards, city councils, etc….
Three days ago, I attended a meeting in suburban Oakdale, where four local legislators, Senators Kent and Wiger and Representatives Ward and Lillie met with interested constituents to report on what they were doing. About 40 of us answered the invitation and attended.
(click to enlarge photo) 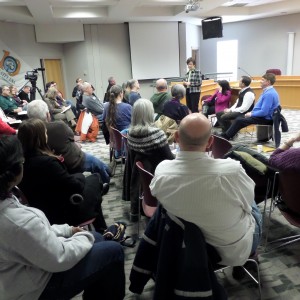 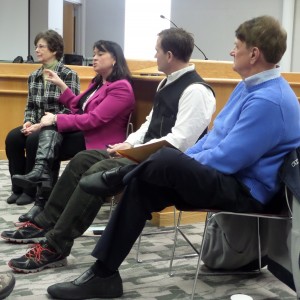 These meetings happen periodically everywhere. I found out about this one through being on an constituent e-contact list for my state Representative.
At this 1 1/2 hour meeting, we were invited to submit questions in writing to which any or all of the legislators could respond. You didn’t even have to listen carefully to discern that administrating an entity, in this case a state with over 5 million citizens, is not easy, though the tendency in our media saturated society is to describe problems and solutions in sound-bite certainty.
Not so.
As I remember, here are the issues brought up, briefly, on Saturday. And this was just in 1 12 hours. Just this list gives an idea of the multitude of issues “on the table” at our state legislature:
1. A proposed re-purpose of a Benedictine Nun facility in Maplewood for use as housing for women transitioning from desperate situations. This Tubman Center project is a major proposal before the 2014 legislature and is in our area. As described in one source I read: “Transitional housing is supportive housing that helps fight the homeless problem in todays society. Transitional housing is generally for a limited time period. Stays can be from two weeks to twenty four months. Transitional housing provides people with help after a crisis such as homelessness or domestic violence.”
2. The crucial issue of early literacy education for youngsters.
3. A need to increase the Minimum Wage.
4. Discussion of the recent roll-out problems of MnSure.
5. The always-issue of Transit, with discussion of the Gateway Corridor Study. Our District is between Wisconsin and St. Paul, and I-94 runs through it, so this is a crucial issue in this area, with lots of ideas of how best to address the need. This issue is a good example of the need/requirement for cooperation between government entities at all level, from the local to the national government. In a complex society, we cannot be free agents, though some would like this “freedom” to be so.
6. Partnership and assistance with a new Research and Development facility or 3M, whose corporate headquarters is in our legislative district.
7. The Bullying Bill. This is a column in itself, and Sen. Wiger, a legislator for 19 years, and before that a school board member, was particularly passionate: “there will be a bullying bill”, I recall him saying. The present law is only 37 words and badly needs redefining in many ways. Bullying is destructive behavior, and while it adversely affects only 2% of students, nonetheless that is a huge and unacceptable number. I wrote about this issue in June, 2012 for the Journal of the Minnesota School Boards Association (MSBA). If interested, here it is: Bullied MSBA Journal001.
8. Making legislators aware of concerns about the Minnesota Orchestra 488 day long Lockout which ends Feb. 1.
9. Exempting retired military pay from State Taxes
10. Labeling of Genetically Modified products.
11. Judicial Retention election procedures
12. Changing the Electoral College
13. The 5% Campaign related to disabled persons.
14. Addressing the problem of insurance coverage for persons with chronic Lyme Disease. Some people don’t just get over Lyme Disease, but insurance limits are sometimes a problem.
In addition, there were several strictly local issues: sidewalks in Maplewood; redevelopment at Tanners Lake and the old Oakdale Mall, etc., etc.
All of this in an hour and a half….
Get on your legislators communications list, thank them, help in whatever ways you can.
They are, like their colleagues at other levels of government, representing all of our interests as a society.
https://thoughtstowardsabetterworld.org/wp-content/uploads/2022/04/thoughts-300x138-1.jpg 0 0 dickbernard https://thoughtstowardsabetterworld.org/wp-content/uploads/2022/04/thoughts-300x138-1.jpg dickbernard2014-01-28 07:10:482014-01-28 07:10:48#836 – Dick Bernard: A Community Meeting

If you live in Minnesota or vicinity, and you give even the tiniest bit of attention to news, you will know that THE MINNESOTA VIKINGS NEED A NEW STADIUM (or so they claim). What is more real is that they WANT a Stadium.
MN Gov. Mark Dayton has called for a Special Session of the Legislature before Thanksgiving to decide what obligations will be assumed by Minnesota Taxpayers to build this new facility, wherever it happens to be built. His is a prudent political decision.
Personally, I have no particular interest in the issue. I think the Stadium will be funded, and taxpayers will pay lots of the cost, and I think it will be a very stupid decision, and I will so advise my legislators, but it won’t interfere with my daily life. It’s only a few hundred million, after all. Heckuva deal.
I attended a single Vikings game in my life, back in the early 1970s before sophisticated cameras and large TV screens, and I had arguably the worst seat in the stadium: beyond the end zone, in perhaps the third row up along the third base line at old Met Stadium. I could see the football in the air when it was being passed or kicked. I could discern progress only by cheers, boos and public address system, and by the long sticks showing where on the field the team was.
It was a horrid experience, never to be repeated.
This doesn’t deter the pitchman for the National Football League (NFL) saying yesterday “Great Cities are defined by the great institutions that they support”. This quote was on the front page of yesterday’s Minneapolis Star Tribune, above the fold.
Quite obviously he was talking about taxpayers supporting NFL football.
What a joke.
The Vikings have never won a Super Bowl, and are having a rotten season this year.
Since I don’t follow the game, I only see the aftermath in the morning after coffee crowd who mostly watched the game on television.
These days, there isn’t much animated conversation about The Team. The Vikings have died and gone to hell…quite literally.
Still, when all is said and done, my prediction is that even in these dismal economic times, when everything else is being cut, the State Legislature will find a way to involve ‘we, the people’ in helping along the wealth machine that is the NFL and its teams, including the Vikings GETTING THEIR STADIUM.
So, how much should this matter? Of course, points of view differ.
Real roughly, it seems that perhaps 1 of 1,000 Minnesotans actually attend the home games of the Vikings during the season, and, likely, most of these attend more than one game or are season ticket holders.
Very few care much about what the stadium looks like, or what amenities it has.
Lots of others (not I, thank you) watch the games at home or in other gathering places. But their time is not occupied by seeing how wonderful the corporate boxes are, or how good the obscenely priced drinks or food at the stadium are.
You could play the game in a large warehouse, with a green screen (a la the weatherman’s invisible screen) and sound effects, and nobody would know the difference. There’s a great plenty of authentic crowd pictures and noise already archived.
That would be much more efficient.
But in the end, we’ll cough up several hundred million dollars one way or the other, to preserve a home team which doesn’t perform especially well, and most of us will never see the inside of their stadium. There’ll be another coach, another quarterback, a new tight end…by Super Bowl XC (we’re approaching XLVI in a few months) THE VIKINGS WILL WIN!!! And that new stadium will have to be replaced, again.
What happens between now and the Minnesota Special Session, and after, will be political fodder in 2012. Gov. Dayton knows this; so do the legislators.
The real losers will be the school kids, the small rural cities and country, the poor, the people who suffer loss of revenue or services to help satisfy a greedy industry and its satellite businesses dependent on it.
Sad.