I expect to regularly comment on the Minnesota Shutdown at this space. Check in once in awhile. Related post for June 30 here.
In the evening of Day One of the Shutdown, we took our Grandson Ryan to a Minnesota Twins vs Milwaukee Brewers game at Target Field.
It started very nastily, with a two hour weather delay, and ended well after midnight with a Twins win: 6-2. Very tired, but all good.
The weather (photos below, click to enlarge) give evidence of an opportunity I had for two hours to see lots of Minnesotans in action less than a day after the government shutdown. 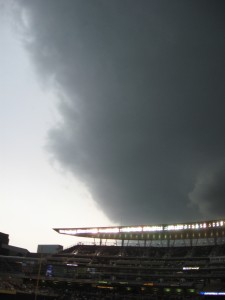 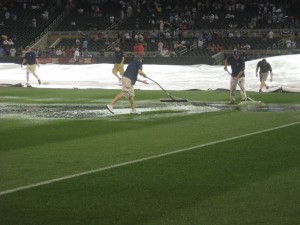 After the deluge, and before 'batter up'

Minnesota nice prevailed on the filled concourses during the two hour delay. Beer sales were apparently very brisk, as evidenced by long lines at the men’s restrooms. Even though the storm seemed potentially ominous (it ended relatively benign), there was no sense of panic. The Stadium is very well constructed for this kind of contingency, it appears, and the facility personnel were well prepared. Whatever one might feel about the Stadium itself, it was built in the present with an eye towards future possibilities, including unpleasant ones, like bad storms. That’s what infrastructure is all about.
But you couldn’t tell, Friday night, that Minnesota Government was essentially shut down. That non-response is to be expected. It takes days, weeks, sometimes months to come to grips with a hugely unpleasant reality: when Future becomes Present, and you can only wish you did things different back then in the Past. I thought back to an extremely difficult time in my own life, when burnout caused me to leave a secure job and become unemployed without access to unemployment insurance. It was initially rewarding. I desperately needed the break. But as time went on, and the grim realities of no money and no job set in, there was more a sense of panic. This began about 29 years ago, and it is a time I will never forget. Present indeed becomes Future, and if you don’t look beyond today, you’re living in a fools paradise.
Back home after the game a flooded e-mail box with assorted comments about the shutdown.
One particularly caught my eye. I am close enough to the sources of credible political commentary to on occasion get material like what I saw later in the day here, which is most likely genuine. The Minneapolis Star Tribune editorial this morning seemed to verify the reality of the e-mail.
I have been around collective bargaining of all sorts for many, many years, including death’s door negotiations to avoid strikes.
One of the rules, which does not even have to be written, is that you don’t bring to the table at the end of the process items that you know will not be negotiated by the other, unless that is your intended purpose: to find an excuse to walk out…and then blame the other side for what was, in fact, your own intended purpose.
This apparent proposal is full of these items. Add an apparent refusal to even consider Gov. Dayton’s priority of additional taxes on the very wealthy (at the end, those with over $1,000,000 incomes), and there is no place to bargain. If in fact it is true, which is likely, the Republican negotiators either were hopelessly naive, or, more likely, desired the outcome which was headlined on July 1, as “SHUT DOWN”.
Regrettably, few people really pay attention to politics, except for sniping, negative comments about “them”. And in this polarized political environment, the tendency is to shut out reasonable arguments that don’t represent your “side”. So, at this point, few people are interested in anything past the sound bites they might see on the evening news or in a headline; and too many are caught up in that most shallow mantra: “we don’t have a revenue problem, we have a spending problem”.
If this thing doesn’t settle, soon, the body politic will begin to come to grips with a very harsh reality, much as I did 28 years ago. Back then an important (and I believe, still, necessary) decision for my own mental health went awry, later creating serious problems affecting only my tiny (in relative terms) personal universe. We’re now making serious problems for our entire country, for everybody.
There’s a big difference between derailing an entire train, and one person jumping off of it….
ADDITIONAL COMMENT ON DAY THREE: Of course, everything would be immediately solved if one of the negotiating parties dropped their demands and conceded to the other. That has been an obvious potential problem since the day after the election in 2010 more than eight months ago; and it is the ‘sound bite show’ – if only THEY or HE would concede, we could settle this thing in a moment.
I was glad when they went behind closed doors to try to settle things without news release and fanning flames.
It didn’t work. It remains the only potential for success. 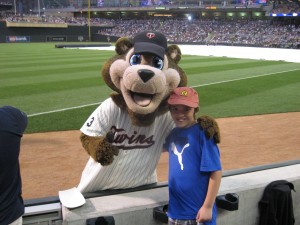 Ryan with "t c". He got his hat autographed!