UPDATE: 23 comments below. A second post on this topic, with additional comments, is accessible here.

I’m publishing this a few hours before the Big Release of the Supreme Court decision on what has come to be known as “Obamacare”.
I have no prediction.
All I know is the reality, learned at too young an age, about what it means to be desperately ill and uninsured.
Perhaps someone will read this, and get the message and maybe even change their mind about “Obamacare” (which I deliberately choose to label “Obama cares” in the headline.)
Forty-nine years ago, in mid-October of 1963, fresh out of the U.S. Army, I began teaching school in a small school district in northern Minnesota. Medical Insurance, then, was strictly an elective affair. You wanted it, you got it on your own, and you paid for it.
I was 23 years old. I signed up for doctor but not hospital insurance.
My new wife was even younger than I, also a first year teacher in another school district.
Two weeks after I started teaching, Barbara, already feeling ill, went to see the doctor (a few miles north, in Canada), found out that her kidneys were not working right. She had to resign from teaching two months into her contract. She was pregnant. We began a new unplanned-for life.
Three weeks later, President Kennedy was assassinated.
Those years you couldn’t say “Time out. I think I’ll take some of that hospital insurance now.” Besides, her kidney condition was “pre-existing”.
We struggled on through almost two years of hell.
There is no heroic way to describe it. We just plodded on through it. At the end of May, 1965, she collapsed in a coma at home. She left our town in an ambulance to Bismarck ND; then, in a few days, on to Minneapolis.
At University Hospital they admitted a non-resident patient with no insurance and no ability to pay.
And on July 24, 1965, in Minneapolis, far away from our North Dakota home, Barbara died at University Hospital, not living long enough to receive a kidney transplant, a procedure then in its infancy.
July 29, 1965, on a blustery hilltop in Valley City ND, Barbara was laid to rest. Son Tom, one, was there, as were friends and family.
I came back to the Twin Cities to start the new job I’d received three days before she died. In the fall, as I was preparing to file for bankruptcy, North Dakota Public Welfare came through and paid most of the major medical expense we had incurred. Our bills, while equivalent to over two years of my then-salary, were minuscule compared to today.
My son and I lived with a kind family who provided babysitting for my son, and a room for me, and I worked much of that first year at two jobs. And ultimately survived.
It wasn’t until many years later that I learned that the day after my wife was buried, July 30, 1965, President Lyndon Johnson signed the Medicare Act into Law. Now, 47 years later, I have a certain amount of seniority in the wonderful Medicare program.
And we wait for a ruling, momentarily, where some people are hoping that “Obamacare” will be tossed on the trash heap, and the health safety net, complicated enough as it is, will be made even more fragile.
For years I’ve heard all the arguments about why there shouldn’t be some significant version of National Health. Lately I’ve had to endure a TV ad of some supposed family physician lamenting the evil of Obamacare: that some of her patients might not be able to have their appointments with her anymore; and further asserting, without any supportive data, that Obamacare will drive up health care costs even more.
And I think back to those years of 1963-65, when I was in my twenties, and my wife was dying without insurance, and we were broke.
Whatever happens with the Supreme Court today, the reality will remain, for me, that everybody in this wealthy nation of ours deserves the best in education and health care, regardless of their means.
I’ll be interested in the ruling today…. 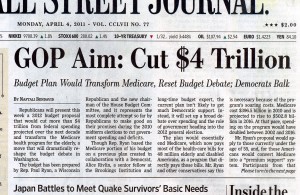 The essentials are easily read: “Medicare”; “under the age of 55”; “cut government spending”….
The aim, of course, is not at all to “cut spending”. Rather, it is to cut government control of that spending, so as to facilitate making even more money at the hands of the helpless.
Here’s a simple example:
As it happened, today I was paying a bill to an Emergency Care facility. The essence of the bill is below.
It is a reasonable bill: the “You Now Owe” column showed $49.42.

(I had a bad sore throat, and I went to the neighborhood facility rather than wait till the next week and drive 20 miles to my primary care doctor. I had a simple throat culture to check for Strep and went home….)
The Bill is pretty self-explanatory. The apparent hourly rate for the procedure I had is $675.00 an hour (I was billed for 20 minutes). I’m on Medicare, and Medicare paid $19.61. More important, Medicare disallowed $155.97 of the bill, leaving me owing $49.42. In all, I’d estimate less than 10 minutes time with a nurse and then with a doctor during this visit. As anyone who’s visited a doctor’s office knows, waiting alone is most of the time spent.
I have no idea, of course, on what the $675 per hour figure is based. It could simply be a conjured up number. The fact of the matter is, however, that it is a number declared by the provider.
Another fact of the matter is that the entirety of that Government money at all levels is ultimately spent on all of the things government budgets are spent on: wages, materials, etc., etc. The vast majority of that spending ultimately goes to purchase something from the economy.
The issue is not the money; it is the control of the money. Apparently, in my case, the provider of the care would have preferred to ring up a tab of $225, but Medicare thought that was about $175 too much.
Without Medicare, the bill I had to pay would have been much, much higher.
Of course, the same business community that chafes at any controls on its ability to make money, has no qualms whatever in attempting to interfere with workers rights to organize and bargain. That’s just how business is…competition is good, so long as the winner is known.
So is how it goes with economics dominated by greed.
A few hours earlier, CBS’ 60 Minutes had an excellent segment on the war between banks and huge numbers of people whose homes are being repossessed. The segment is well worth watching. Succinctly, banks hired out the task of reconstructing missing documents to a firm that subcontracted out to another firm who had employees fraudulently sign paperwork for submission to Court. One person interviewed said his quota was 350 signatures an hour, for $10 an hour wages. The responsible banks refused requests for interviews, and blamed the subcontractor for their misdeeds. And these are people we trust?
Sooner than later – hopefully before it’s too late – common people, of which I am one, will realize in large enough numbers that they are being played for fools by big money and big business, and all that stands between them and disaster is a reasonably strong government which can effectively regulate the bandits among us who make a huge amount of money.
https://thoughtstowardsabetterworld.org/wp-content/uploads/2022/04/thoughts-300x138-1.jpg 0 0 dickbernard https://thoughtstowardsabetterworld.org/wp-content/uploads/2022/04/thoughts-300x138-1.jpg dickbernard2011-04-04 15:27:102011-04-04 15:27:10#355 – Dick Bernard: The Public "Lambs to the Slaughter"