The McFadden family of Dubuque IA hosted a Berning family reunion this past weekend and I attended. There were about 130 of us in attendance. It was a perfect demonstration of the old adage about effective gatherings of any kind: “Food, Fun and Family”. (An uncaptioned photo gallery is included with this post. Family members in the know, will know!)
As years pass, such reunions are more and more difficult to organize. My common roots with the McFadden’s are great-grandparents August Berning and Christine Vosberg Berning of rural Louisburg, WI, perhaps ten miles northeast of Dubuque. In their “day” – they were born in the 1840s, in Germany and Wisconsin respectively – family reunions happened at least weekly, if not more often. Everybody lived in the same community, were the same religion, were the same nationality (in this case, German), had the same traditions, etc. And getting places away from ‘home’ was unusual.
Today such gatherings bring together people who meld many places, beliefs, traditions, etc., etc. What is normal today would have been unthinkable 100 years ago.
But we came together, and there was certainly FAMILY, and far more than enough FOOD, and a great plenty of FUN on a hot, sunshiny, Iowa day. At this gathering ages ranged from the really young, to 94.
We gathered at Swiss Valley Park near Peosta IA, an excellent venue. The entrance I used has cars drive through the Catfish Creek. It is designed that way. Signs remind people not to drive through in high water, but I’m sure there have been mistakes. The crossing is a focus for families – a variation on the ole swimmin hole. (Click on photos to enlarge them.) 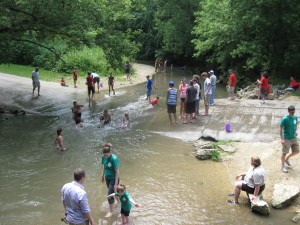 There was a serendipity element to finding we were at Catfish Creek, since I have a very old postcard from the family files of another setting of that same Catfish Creek where it enters the Mississippi River. 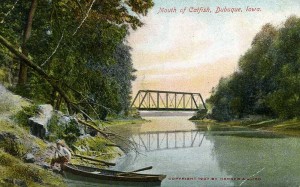 Catfish Creek has an interesting history in and of itself. One description is here; a photo at the road crossing at the Park is below. 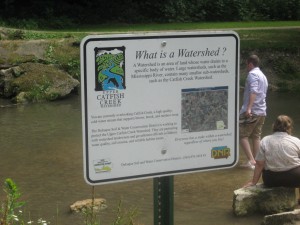 Formal reunion over I retraced some historical steps, including one with sentimental value for me: at the last reunion, in 1994, my Dad and we siblings went up to the Julien Dubuque monument overlooking the Mississippi. It is after Julien that Dubuque is named. Like Dad, Dubuque was pure French-Canadian. 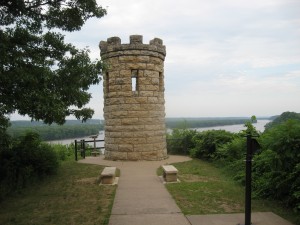 This time, at the monument, I read the descriptors, and found that Peosta, that town with the odd name, was the Indian Chief whose daughter Dubuque had probably married ‘back in the day’ in the late 1700 or early 1800s (Dubuque died in 1810).
Sunday Mass at St. Joseph’s at Sinsinawa and breakfast at Marion Placke’s, then a tour of the old McFadden place in once rural Asbury (now Dubuque) ended a great weekend. Those with an interest, the old home place can be seen at Mapquest at the southwest corner of Radford and Pennsylvania(Middle) Road. The acreage to the south and west remains open and is still in the family. To the east, what appears as open acreage has now been built up.
Family history is harder and harder to maintain. As the old tightly knit communities disappear, as they already have, it is ever more important to built and maintain a family identity, one that reaches far beyond the traditional bounds our ancestors knew.
Thanks, McFadden’s, for a great gathering.
https://thoughtstowardsabetterworld.org/wp-content/uploads/2022/04/thoughts-300x138-1.jpg 0 0 dickbernard https://thoughtstowardsabetterworld.org/wp-content/uploads/2022/04/thoughts-300x138-1.jpg dickbernard2011-07-11 11:27:172011-07-11 11:27:17#399 – Dick Bernard: A Family Reunion of the Berning Bunch