UPDATE: A reader sends along this Eyewitness to History link from the actual day/place in 1918.
Today is a unique date: 11-11-11 (November 11, 2011).
It is also Armistice Day, commemorating the end of World War I, when at the 11th hour of the 11th day of the 11th month in 1918, a moment was taken to recognize the hope that the end of the Great War, was also the beginning of Peace (hope always springs eternal.)
My mother, Esther, then 9 years old, remembered the day vividly: “The hired girl and I were out in the snow chasing chickens into the coop so they wouldn’t freeze when there was a great long train whistle from the Grand Rapids [ND] railroad track [about 4-5 miles away, as the crow flies]. In the house there was a long, long telephone ringing to signify the end of World War I.” (page 122 of Pioneers: The Busch and Berning Family of LaMoure County ND).
WWI was very deadly and confusing: my grandparents and most of the neighbors in their home (Wisconsin) and settlement (ND) communities were German ancestry, first generation American, and spoke German. One of my grandfather Busch’s hired men was killed in the war, and Grandpa wanted to enlist. Mom’s younger sister Mary, born 1913, remembered “there was a lot of prejudice against Germany at that time so the language was kept quiet. Being called a “kraut” wasn’t the nicest thing to hear. Most of the neighbors had German ancestors. Most of them came to the U.S. to avoid compulsory military training.” (p.136)
Esther and Mary’s Great-Uncle Heinrich Busch in Dubuque, a successful businessman who with his parents and brother had migrated from Germany in the early 1870s, wrote a passionate letter, in German, home to his German relatives Nov. 5, 1923, saying in part “The American millionaires and the government had loaned the Allies so many millions that against the will of the common folk, [P]resident Wilson was pulled into the War. England had nine million for newspaper propaganda [for war] in American newspapers about the brutal German and that the German-Americans had come to suffer under it, they were held [arrested] for [being] unpatriotic and were required to come before the court for little things as if they were pro-German. The damned war was a revenge and a millionaire’s war and the common people had to bleed in this bloody gladiator battle…..” (page 271) He went on in the same letter to predict the rise of a regime like the then-unknown Hitler and Nazis because of Germany’s humiliation and economic suffering in defeat.
War was not a sound-bite. History did not begin with Pearl Harbor and WWII….
Armistice Day is still celebrated in Europe, especially.
In the United States, in 1954, the day was re-named Veteran’s Day.
Whether intentional or not, the original intention of Armistice Day has come to be diluted or eroded: rather than recognize Peace; the effort is to recognize Veterans of War.
I’m a Military Veteran myself, so I certainly have no quarrel with recognizing Veterans.
But today I’ll be at the First Shot Memorial on the Minnesota Capitol Grounds, recognizing Armistice Day with other Veterans for Peace. Part of the ceremony will be ringing a common bell, eleven times.
A block or so away the Veterans Day contingent will be gathering at the Vietnam War Memorial.
The same kinds of people; a differing emphasis….
Ten years ago today, November 11, 2001, we were waiting to board our plane from London, England, to Minneapolis.
At precisely 11 AM…well, here’s how I described it in an e-mail March 20, 2003: “One of the most powerful minutes of my life was at Gatwick airport in suburban London on November 11, 2001, when the entire airport became dead silent for one minute to commemorate Armistice Day, which is a far bigger deal in England than it is here. The announcer came on the PA, and asked for reflective silence. I have never “heard” anything so powerful. I didn’t think it was possible. Babies didn’t even cry.”
A year later at the Armistice Day observance of Veterans for Peace at Ft. Snelling Cemetery I related this story again for the assembled veterans.
Today, whether you’re observing Veterans Day, or Armistice Day, remember the original intent of the day.
Peace in our world.
UPDATE – Noon November 11, 2011
Some photos from the Armistice and Veterans Day commemorations on the State Capitol grounds. The ceremonies were about one block apart. I spent time at each. Factoring out the band and other official personnel at the Veterans Day observance, the number in attendance seemed about the same. At the Armistice Day observance, eleven peace doves were released after a bell was rung eleven times. At the Veterans Day observance there was the traditional 21 gun salute. (click to enlarge the photos) 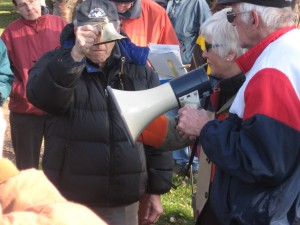 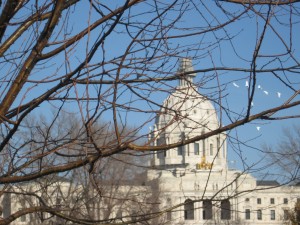 Some of the eleven doves of peace released at the ceremony. 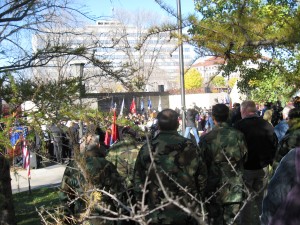 At the Veterans Day observance at the Vietnam Memorial, Capitol Ground 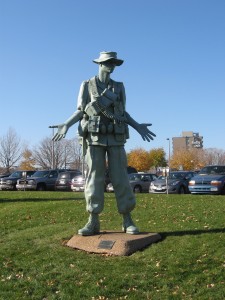 Statue between the Armistice and Veterans Day observances today, at St. Paul MN