Yesterday, on my daily walk, I came across a guy who, I thought, was acting strangely.
He had a shovel, and was on the right side of the street, taking a clod of snow out of the abundant snowbank there. Then, oddly, he carried the clod across to the left side of the street, and returned to repeat the process.
Being curious, I asked “why?”
Quite matter-of-factly the young man said “I’m building a snow fort for my daughter”.
Oh…. 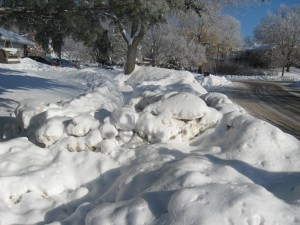 Show Fort on a suburban street

Such it is at the season where we seem to have a great abundance of White Christmas – 6″ more by our house again this morning.
I just walked by the man’s house again, and there it was, a snow fort. As kids interest span goes, there probably was a flurry of activity at the fort yesterday; today it’s on to other things. But it was a nice piece of “Christmas”.
Maybe because it’s cold up here, and indoors is more a normal state of affairs this time of year, thoughts turn quite easily to reminiscing, especially as one moves on in years.
I could build on the snow fort story with my own recollections in long ago North Dakota; or I could reprint a Grandpa story sent to me by a friend, himself a Grandpa, with this years Christmas card.
Rather, I’d like to offer a more lengthy story, shared by a Minnesota French-Canadian in the winter of 1996, in a newsletter I was then editing called Chez Nous. The story link is Lowell Mercil – Winter 001 . Most recently I included it as part of a family history book I’ve written about my father’s family and their 400 year history in North America.
It’s about 7 pages, so take your time. But you’ll enjoy the trip back in time to, perhaps, the 1930s in northwestern Minnesota near Crookston and Gentilly.
All best wishes.
https://thoughtstowardsabetterworld.org/wp-content/uploads/2022/04/thoughts-300x138-1.jpg 0 0 dickbernard https://thoughtstowardsabetterworld.org/wp-content/uploads/2022/04/thoughts-300x138-1.jpg dickbernard2010-12-24 12:24:002010-12-24 12:24:00#302 – Dick Bernard: Christmas Eve, a story of winter in rural Minnesota