Soon after 9-11-11 I received a “real” (with postage stamp) letter from a great and long-time friend: “Enough 9/11 already. [My son] contends that if we put the same energy into remembering victims of battering and child abuse, it would be well served. I am not unsympathetic, but where is the energy for other injustices? Am I being a cynic I wonder.”
Fair enough. In fact, I agree. My 9-11-11 post is titled “The first day of the rest of our life as a people“. My comment on 9-11-01 itself is titled “Have we learned anything these last ten years?”
The letter caused me to reflect on a long ago event and how it applies (I feel) to today’s world.
In 1957 we moved back to Sykeston ND. It was my senior year in high school, and we’d been elsewhere for the previous six years.
For the only time in my life I was in a school having enough boys for a football team, though only six-man. 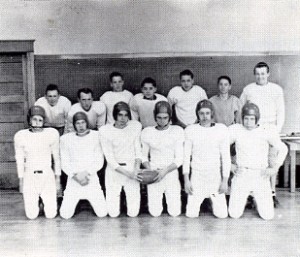 As the photo shows (I can remember almost all of the team members, I’m in front row, third from left) we did not look terribly impressive. The yearbook says we only played two games, winning the first against Goodrich, 26-0, and the second against Cathay, 40-2. The other two games were “postponements”. At any rate, when we played we apparently did all right. I had one touchdown, the yearbook says.
Ah, Kenny Chesney’s “The Boys of Fall”. Undefeated.
I remember vividly something during the Goodrich game (we were the visitors). At some point in the game I found myself running towards a big horse of a kid running towards me down the field. All I remember is that he was BIG, and I hit him head-on, and it hurt bad.
Nothing broken, or even bruised, but I knew he and I had met. At minimum I stopped him cold.
That was the Goodrich game: 26-0, Sykeston. It was no Kenny Chesney moment, but it was a moment.
But how about “Us vs Us, 2011”?
I know there are readers of this blog who don’t like football, and that’s okay.
But the U.S. body politic is very seriously fighting against itself these days, and just like that big horse of a guy and me in 1957, either you’re on the field, or you’re on the sidelines, in the stands, maybe not even showing up to support the team, but only being a “Monday morning quarterback”. Absence from action is dangerous for us all.
We’re a Nation of One’s and we’re at risk. It’s the rare person I talk to who doesn’t have his or her sole first and primary priority for this country, and bases his or her judgments on this single priority. All too often, deliberately, problems are cast as President Obama’s fault.
It’s not President Obama’s game to win or lose, it’s ours as a society.
And the function we can serve in the winner-take-all fight that faces us is to be on the field, getting bruised up.
If we’re on the sidelines, or not at the game at all, the opposition has free rein, and we’ll all suffer, including the people who think they’re winning.
Here I am, 54 years from 1957.
In that long-ago game, I met the bruiser head on and we won 26-0. Sure, that’s meaningless…or is it?
Where will Kenny Chesney’s “Boys of Summer” be 54 years from now?